Destroy Earth, the universe, & the Multiverse (all failed).

In Season 1, he was voiced by Keith Szarabajka who also played Daniel Holtz in Angel. In Season 4, he was voiced by Kevin Michael Richardson, who also played Mammoth in the series, The Joker in The Batman, Captain Gantu in the Lilo and Stitch franchise, Dark Laser in The Fairly OddParents, Temutai in Kung Fu Panda: Legends of Awesomeness, Goro in the Mortal Kombat game series, Chairman Drek in the Ratchet & Clank video game, Black Samurai in Scooby-Doo! and the Samurai Sword, Doug the Pimple in Family Guy, Tartarus in Halo 2, Sarevok Anchev in Dungeons & Dragons, Shredder in the 2012 Teenage Mutant Ninja Turtles series, Tombstone in The Spectacular Spider-Man Demongo in Samurai Jack, Skallox in Green Lantern (2011 Animated Series), Sir Morton in the Ben 10 Franchise and Kamek in the Illumination's Upcoming Mario animated film.

Trigon first appears, unnamed and with a different appearance from his actual introduction, in the season 1 episode "Nevermore" as a manifestation of Raven's anger within her mind. Beast Boy and Cyborg see her fighting the evil copy to free herself of the anger she had while fighting Dr. Light.

Trigon later appears as the main antagonist in the fourth season. Trigon resurrects the Titans' foe Slade to force Raven into releasing him upon the Earth. In the three-part finale "The End", Trigon finally emerges and destroys the Earth; the Titans are spared by a fraction of Raven's power, which she had given them before releasing Trigon.

While Robin and Slade find Raven, Trigon uses Nega Beast Boy, Nega Cyborg, and Nega Starfire to attack their good selves. The 3 titans win by outsmarting their evil copies. Slade gets his flesh back by killing The Guard.

The Teen Titans are joined by Slade, so they launch an all-out assault on Trigon, but are ultimately too weak to defeat him. In the end, it is Raven who defeats him, using her own powers to banish Trigon, undoing the destruction he had caused in the process and the potential conquest of every world in the cosmos by his demonic followers.

Trigon appears as one of the main antagonists. He is brought back to life after his 2013 incarnation sucks 2013 Raven's demon power and brings him back after her father pits the 2013 titans against the 2003 titans. Then they take the Ravens to Trigon's dimension to finish absorbing Raven's power to fill his missing leg. The Ravens then trick their fathers into unintentionally release them as 2013 Trigon struggles to give his 2003 counterpart a soda, and both reach the 2003 Earth. The Trigons later catch up to the Ravens and after they torture 2003 Raven, 2013 Raven unleashes her demon self which leads to her powers being drained by the 2003 Trigon. As a result, 2013 Raven is now happy and the Titans arrive after escaping Santa Claus. 2003 Trigon insults his counterpart who gets fed up then 2013 Trigon absorbs 2003 Trigon's powers and transforms into a new powerful being named Hexagon. To combat the new threat, the Titans use the Worlagog to summon Titans teams throughout the multiverse. However, Hexagon proves to be too powerful, and worse 2013 Raven is too cheerful to understand the danger. She eventually evens the odds by absorbing all of her counterparts and transforms into a dragon known as The Unkindness, protecting the Robins and then proceeding to retaliate against Hexagon. The Titans destroy Trigon's Worlagog and assist Raven in getting her powers back, which gets rid of the 2003 Trigon. 2013 Robin uses their Worlagog to send 2013 Trigon to a zombie dimension.

Trigon possesses vast reality manipulation powers, enabling him to reshape the surface of the Earth on a whim, revive the dead (either as superpowered undead servants or flesh and blood), and rip the fabric of space to transport his army vast distances. He can bring a person's inner darkness to life, creating an exact replica of that person, down to their powers and memories. He also possesses more generic superhuman abilities such as firing energy blasts, creating force-fields, and controlling fire, the latter of which he can impart to his servants.

Despite being claimed to be the incarnation of pure evil and the source of all darkness, Trigon's ultimate weaknesses are his ego personality, obsession with power, sheer arrogance, and pure overconfidence; he had every opportunity of wiping out the Teen Titans when he had the chance, but instead he chose not to by merely stating that their rescue plan of Raven and their existence presented "no threat" to him. It is clear that Trigon failed to realize that he inadvertently underestimated the Teen Titans as well as his own daughter, which lead to his own downfall. 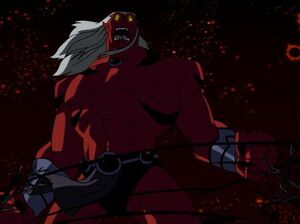 Trigon as a manifestation of Raven's rage. 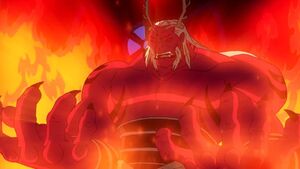 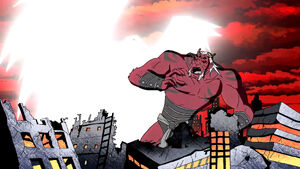 Trigon moments before his banishment. 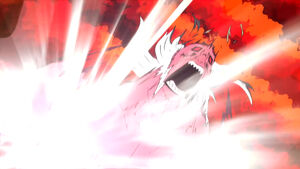 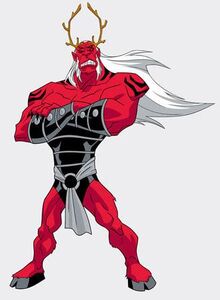 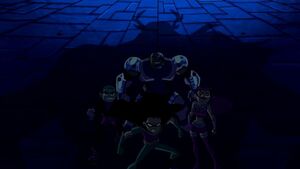 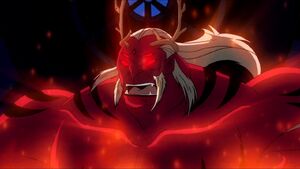 The Earth is mine! 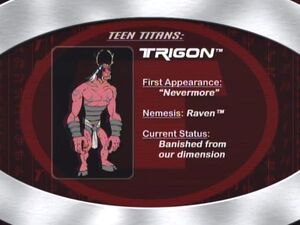