Villains Wiki
Register
Don't have an account?
Sign In
Advertisement
in: Demon, Teen Titans Villains, Related to Hero,
and 51 more

Bothering Raven and the Teen Titans.

Destroy the Teen Titans (except Raven).

Get his daughter Raven to embrace her demon side or to love him (ongoing).

Trigon is the secondary antagonist of the 2013 Cartoon Network series Teen Titans Go!.

He is voiced by Kevin Michael Richardson, who also voices his 2003 incarnation, Mammoth in the series, The Joker in The Batman, Captain Gantu in the Lilo and Stitch franchise, Dark Laser in The Fairly OddParents, Temutai in Kung Fu Panda: Legends of Awesomeness, Goro in the Mortal Kombat game series, Chairman Drek in the Ratchet & Clank video game, Black Samurai in Scooby-Doo! and the Samurai Sword, Doug the Pimple in Family Guy, Tartarus in Halo 2, Sarevok Anchev in Dungeons & Dragons, Shredder in the 2012 Teenage Mutant Ninja Turtles series, Tombstone in The Spectacular Spider-Man and Demongo in Samurai Jack.

Trigon happens to be more kid-friendly while retaining his demonic nature and evil intentions. Aside of his huge demonic form, he is also capable to modify his size to a human size and presents himself as an affable and friendly father of Raven, getting along well with the Titans, except Raven who knows his true nature. He's also seen playing kite with the Pretty Pretty Pegasus (a parody of My Little Pony franchise) motif and wears pink shirt. Trigon even gives various gifts for the other Titans, giant muscle mass for Robin, dog hand for Cyborg, ability to turn into anything other than animals for Beast Boy, ability to speak like a teenage Earth girl for Starfire (which turns her into a Valley Girl) and wings for Silkie. When Raven finally gives in, Trigon finally reveals his true nature that he wants Raven to kill her friends, and then go out with his daughter for ice cream. The Titans finally realized his deception and used his gifts to send him back to his realm, with Raven locking him and noting that he may be back for Thanksgiving.

He returns along as one of two main antagonists. He sucks his daughter's demon power to resurrect his 2003 incarnation by placing the 2013 titans against the 2003 titans. Then they take the Ravens to Trigon's dimension to finish absorbing Raven's power to fill his missing leg. The Ravens then trick their fathers into unintentionally release them as 2013 Trigon struggles to give his 2003 counterpart a soda, and both reach the 2003 Earth. The Trigons later catch up to the Ravens and after they torture 2003 Raven, 2013 Raven unleashes her demon self which leads to her powers being drained by the 2003 Trigon. As a result, 2013 Raven is now happy and the Titans arrive after escaping Santa Claus. 2003 Trigon insults his counterpart who gets fed up then 2013 Trigon absorbs 2003 Trigon's powers and transforms into a new powerful being named Hexagon. To combat the new threat, the Titans use the Worlagog to summon Titans teams throughout the multiverse. However, Hexagon proves to be too powerful, and worse 2013 Raven is too cheerful to understand the danger. She eventually evens the odds by absorbing all of her counterparts and transforms into a dragon known as The Unkindness, protecting the Robins and then proceeding to retaliate against Hexagon. The Titans destroy Trigon's Worlagog and assist Raven in getting her powers back, which gets rid of the 2003 Trigon. 2013 Robin uses their Worlagog to send 2013 Trigon to a zombie dimension. 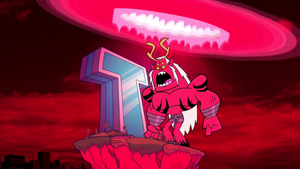 Trigon is his big and evil form. 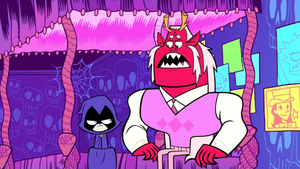 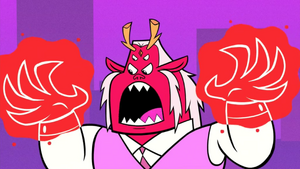 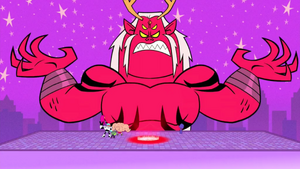 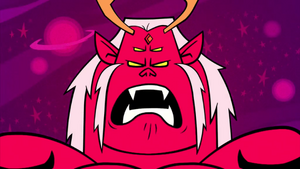 Trigon vows to rule the universe. 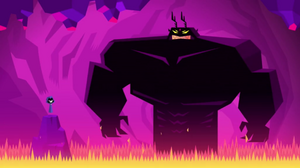 Trigon, as he appeared in Raven's dream. 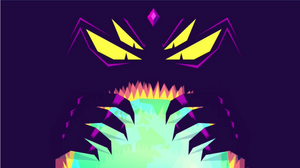 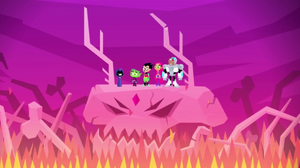 Trigon's corpse after being killed by Raven. 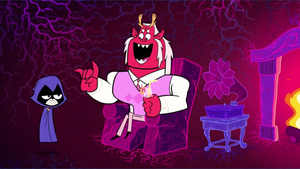 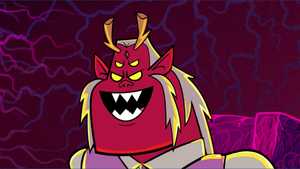 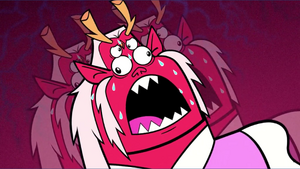 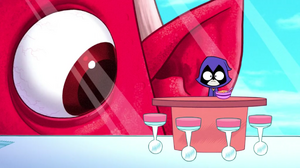