Lord of an interdimensional netherworld

Take over the Earth and the entire universe.

Trigon is an interdimensional demon that is dedicated to dominating the entire universe with the help of the cult of his worshippers. He is also the father of Rachel Roth/Raven.

He is portrayed by Seamus Dever, who also played John Seed in Far Cry 5.

Kory finally remembers her past, and her mission along with it: she has come to Earth to prevent the coming of the demonic overlord Trigon, who’s aiming to use his child Rachel as a living portal to this dimension, but she’s too late. Trigon has arrived in his human form.

Trigon was somehow summoned back to Earth in order to conceive a child with one of his acolytes, Angela Azarath, with the intention of having that child, Rachel, serve as his doorway into the human dimension. Due to his banishment, he was forcibly taken back to his world. The child would also be the anchor that keeps Trigon in their dimension. Once he returns, he will engulf worlds, such as Tamaran, in darkness and they will burn. Earth will be one of his first targets.

Interfering with his plans, a woman named Melissa Roth took Rachel as an infant and ran away. They hid at Saint Paul's Convent for some time in hopes of finding sanctuary and escaping Trigon and his followers. Over time, Melissa would raise Rachel as her own and keep her background a secret from her. For over thirteen years, Trigon's acolytes searched for Rachel. At some point, one of his acolytes managed to locate them and killed Melissa, but Rachel escaped as they continued to pursue her nonstop.

One night, while Gar was in a life-threatening condition, Angela managed to pressure Rachel into summoning her father from his realm, stating that he was far more powerful. Contacted through a mirror in the house, a hand was reached through to him and he was pulled out of his dimension, being able to freely roam Rachel and Angela's world. As promised, he healed Gar, but with the intention to wreak havoc. Shortly following, Dick Grayson entered the house, whereupon Trigon put him into a dream world, enabling him to come to terms with his darkness, ultimately taking control over Dick.

Seeing her friend consumed by darkness, Rachel attempted to retaliate, but Trigon took her powers from her. Rachel ran away with Gar, forcing Trigon to send Dick after them. One by one, members of the newly-reformed Titans made their way into the house, following which Trigon put them into their own dream worlds, having them all consumed by darkness.

Having been unable to escape, and Rachel helpless, Trigon had them all beat up Gar to near-death. He then took Rachel's heart from her body, crushing it, and transforming it into a ruby that he lodged in her forehead, along with transforming himself into his true form. Trigon headed outside, where he began work on destroying the planet, beginning with the countryside. However, before he could proceed, Rachel found it within herself to manifest her powers, using them to disintegrate Trigon. 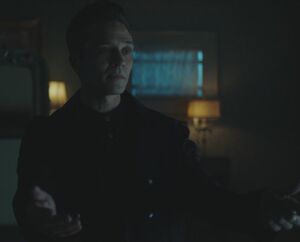 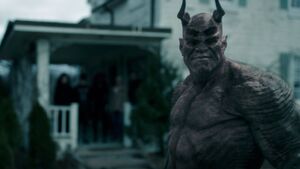