Aid her "father" in his plan to make Hiro his protégé.

Avenge her father's death by fulfilling his legacy by replacing all humanity to robots and kill Big Hero 6 as revenge (both failed).

She was voiced by Christy Carlson Romano, who also portrayed Jennifer Stone from Cadet Kelly.

Obake created Trina to lure Hiro to his side. After he found out about Hiro's bot fighting days, he sent her out to pose as a bot fighter.

Trina created her own bot to take control other competitors' bots so she could steal money and jewelry to attract Big Hero 6's attention (especially Hiro's), in the process also framing the bot's owners, specifically the ones that Mr. Yama had fought, thus making it seem as if he was the thief.

Trina makes her debut appearance in the episode "The Bot Fighter"/

In "Countdown to Catastrophe", Baymax (under Obake's control) takes Hiro to Obake's lair. When he briefly sees Trina, he becomes shocked seeing head detached from her body revealing she's robot. Trina teases Hiro for not figuring it out himself, declaring that it's "so pathetic, it's cute".

Trina sees Noodle Burger Boy as little brother and becomes determined to find him. Trina upgrades herself with a deadly mech suit and a new mohawk. She tests out her new form on Big Hero 6, and successfully beats them. She heads to the Noodle Burger factory, where she stops Hiro from removing Obake's chip from Noodle Burger Boy's system. 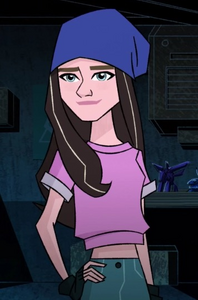 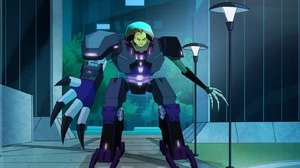