Mechanical Monster
The Trinity Armor is a minor antagonist in the video game Kingdom Hearts Birth by Sleep. It is an Unversed that attacked Terra, Aqua and Ventus while they were in the Radiant Garden and the Mirage Arena. It's composed of three pieces, the α Armor, the β Armor, and the γ Armor, which can combine to form an Unversed armor.

The α Armor contains the Unversed's torso and head. Its head is diamond-shaped and grey with red eyes set in an angry expression. The front of its body is adorned with a large, light blue, U-shaped additive with black edges lined by four shirt spikes. Its "neck" is thin, black, and curls forward. The Unversed symbol is printed on the end of the neck. On either side of the neck, the Unversed has two red "arms" that end in black, triangular blades, each with a yellow stripe on them.

The β Armor takes is cone-shaped and red with black, spiked additives decorating it. The Unversed emblem is on its front. Its base is black with gold lining and four thin, black, propeller-like blades are attached to its top. These blades each have a gold stripe near their tips and the Unversed spins them in a helicopter-esque fashion to move. Its red eyes are on the small spike on its top.

The γ Armor resembles a set of three, segmented, red legs with black and grey joints. The top of the center leg sports two red eyes and acts as the Unversed's "head". The Unversed emblem is small and on the center leg, right below the eyes. Each leg ends in triangular, black feet.

When the Trinity Armor assembles itself, the three individual Unversed each change shape. The α Armor changes very little. Only its head changes, becoming black and sleeker, and it gains a horn on the top of its head. The β Armor compacts and then splits in two, forming the Unversed's arms. The black and gold base becomes the Trinity Armor's armguards and its black and red body becomes two shoulder pauldrons. Thick, light grey arms and black, four-fingered hands reveal themselves from under the β Armor's plating. The γ Armor's side legs remain largely the same as they were before, though the black feet are replaced with more ornate, red and black ones. The center leg retracts into itself and flips upside down. The completed Trinity Armor sports three Unversed symbols, one for each of its components.

The Trinity Armor's name references the fact that it is comprised of three main sections, and the fact that its body resembles armor. α, β, and γ are the lower case forms of the first three letters in the Greek alphabet, and are read as "Alpha", "Beta", and "Gamma", respectively.

The Trinity Armor's coloration is reminiscent of Sora's attire in Kingdom Hearts.

In Kingdom Hearts Birth by Sleep Final Mix, the Trinity Armor receives a palette swap, giving most of its armor a bright silver-white color with red highlights. Small sections of its body, like its elbow joints and midsection, become dark blue, and the α Armor's U-shaped collar becomes yellow.

After Terra exits Merlin's house, he spots the Unversed known as the γ Armor fly past him. He decides to follow the armor to the Reactor.

While that was going on, the α Armor appears in front of Ventus after Dilan and Aeleus forbid him from entering Ansem the Wise's castle. Ventus decided to follow the armor piece which was also heading towards the Reactor.

While that was going on, the β Armor appears near Aqua shortly after she rescues Kairi from a swarm of lesser Unversed with the help of King Mickey. Aqua decided to follow the armor piece all the way to the Reactor as well.

α Armor as it appears in the game's Final Mix 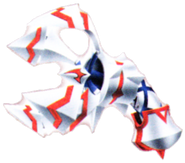 β Armor as it appears in the game's Final Mix 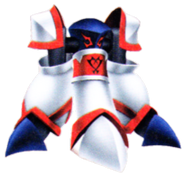 γ Armor as it appears in the game's Final Mix