Trish is a Demon made in the image of Dante's mother, Eva, and a villain turned hero from the Devil May Cry series.

Trish was created by Mundus to look like Eva, mother of Dante and Vergil, and was sent to the Devil May Cry. Upon her arrival, the two engaged in battle and though she managed to impale him and electrocute, Dante defeated her but spared her when Trish said that he needed her help. She told him that the Dark Emperor, Mundus, is planning to make a return and brought him to Mallet Island, the location where the demon lord planned to open a portal to the human world. However Trish had really brought Dante there to get him killed and get rid of the one who could oppose Mundus.

After Nelo Angelo's defeat, Trish was ordered by Mundus to see to it that Dante was destroyed. Trish then waited in the lair of the dark emperor's demonic creation, Nightmare, to draw Dante in. She managed to get him trapped with Nightmare and began blasting him with lightning as the battle went on. However the half-demon still emerged victorious. During the aftermath of the fight with Nightmare, the ceiling began to collapse. When the ceiling was about to crush Trish, Dante jumped in and saved her. Trish was confused why he saved her, and was about to walk towards Dante. But Dante pointed one his guns at her telling her to back off. Despite being enraged at Trish, Dante refused to slay her since she looked just like his mother. However, angered by the deception, he doesn't want to see her ever again.

That is until she was imprisoned by Mundus and held hostage by the demon lord so he could use her against Dante. When the son of Sparda confronted him, Mundus attempted to finish him off with a powerful beam attack, only for Trish to push him out of the way and take the hit instead, apparently killing her. After Dante defeated Mundus, he left the sword, Sparda, as a headstone for the demoness and began to escape the island. However he later found himself cornered by the more monsturous form of the demon emperor. But Dante heard his mother's voice and Trish burst through the wall to lend him some of her energy, giving his guns the power to defeat Mundus. After that Trish began working at Devil May Cry, renamed Devil Never Cry.

After hearing about the Order of the Sword gathering Devil Arms, Trish infiltrated the Order disguised as a woman named Gloria. She managed to gain a high position within the Order after she brought Sanctus the Sparda, which he needed for his plans. Because of her suspiciously quick promotion, negative rumors about Gloria spread throughout the Order's members, though they recognized her combat skills. However it seemed that Sanctus always knew that Gloria was really Trish and simply allowed her there, since he had needed Dante to come to Fortuna and didn't want to arise her suspicions. Trish eventually revealed herself and helped Dante get the people of Fortuna to safety after the true Hell Gate's opening.

Trish's personality is slightly hard to determine, since it varies from game to game. In the first, she seemed rather cruel and harsh, but began to warm up to Dante and even showed care for him as well as showing excitement at the idea of working with him. In Devil May Cry 4, Trish seemed more determined to work for her own gain and to enjoy causing Dante trouble.

Yet, the consistent aspect of Trish's personality is a moral sense she developed from the moment she was humbled by the events in Mallet Island beneath her non-caring attitude. This best shown through her decision to help Dante banishing Mundus back to Demon World and evacuating inhabited of Fortuna during the conflict against Order of the Sword. Similar to Dante, she enjoys a fight.

Trish also developed a friendly rivalry against Mary Arkham aka. Lady, finding the latter more interesting that she initially assumed and impressed by her skill and determination during their two days fight. Other example of their rivalry is when they argue over who'll be in charge of Dante's shop since he and Vergil are stuck in the Underworld only for Morrison revealed that the devil hunter has entrusted the place for him instead, much to their chargin.

Trish's most prominent power is her control over lightning and fights primarily with melee attacks. She's also shown to be incredibly athletic. She has also demonstrated skilled use of handguns. It's also shown that Trish has some abilities to teleport, but she never uses her teleporting abilities after she betrayed Mundus. It's likely that Mundus stripped Trish's ability to teleport as punishment for failing her mission.

She often carries two guns known as Luce and Ombra.

She also sometimes wields the Sword of Sparda, which Dante gave her. The Sword can used like a regular sword, but it can also change into a scythe in combat. She can even use the Sword and throw it like a boomerange. She also wields another gun known as Nightmare-y that specializes when Trish is fighting underwater. It's very similar towards the Nightmare-β, but it doesn't consume DT runes.

Trish also as the ability to temporarily enter into form known as the Majin Devil Trigger form. In this form, she is given the ability to either fly, also known as Air Raid or gain superhuman speed. She's also capable of firing extremely powerful electrical blasts, that home in on the target, and a few other abilities in this form.

As Gloria, she wields a pair of short blades and uses a graceful acrobatic combat style. 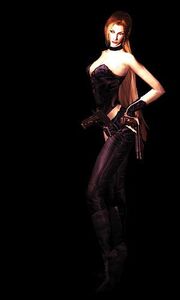 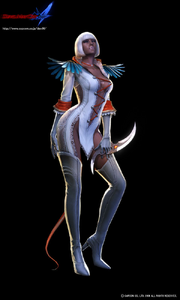 Trish as Gloria
Add a photo to this gallery

Retrieved from "https://villains.fandom.com/wiki/Trish?oldid=3370779"
Community content is available under CC-BY-SA unless otherwise noted.