Start a Wiki
Trish Stratus is a former WWE Diva and a current WWE Hall of Famer who held the prestigious WWE Women's Championship a record seven times in her career. She competed for WWE from 2000-2006, and her tenure included two stints as an on-screen villainess. In early 2001, Stratus became involved in an angle with WWF Chairman Vince McMahon, during a time when Vince's wife Linda was kayfabe institutionalized following a demand Vince had made for a divorce during an episode of SmackDown! on December 7, 2000. Vince and Stratus' relationship increasingly angered the boss' daughter, then-heel, Stephanie McMahon. At No Way Out on February 25, Stratus and Stephanie squared off, with Stephanie scoring the victory after a run-in by William Regal. In the midst of a tag team match that pitted Vince and Stratus against Regal and Stephanie the next night on Raw, Stratus was the victim of a set-up by Vince, Stephanie and Regal. Regal executed his finisher, the Regal Cutter, on Stratus and Stephanie then dumped sewage over Stratus' body. Vince stood over Stratus, and he told her she was a "toy" with which he had "grown tired of playing with". The angle continued the next week on Raw, with Vince forcing Stratus to strip down to her black bra and panties in the ring and bark like a dog. The storyline came to an end at WrestleMania X-Seven, when Stratus slapped Vince during his match against his son Shane, becoming a fan favorite in the process.

Trish debuted for the then-named World Wrestling Federation as the heel valet for Test and Albert (T & A) on March 19, 2000. Within months, she was put in the ring and feuded with Divas such as Molly Holly and Lita. By the end of the year and entering 2001, Trish portrayed the on-screen mistress of Vince McMahon, and was in a feud with fellow villainess Stephanie McMahon. Vince later turned against Trish and attempted to humiliate her, which resulted in a babyface turn for Trish at WrestleMania X-Seven.

She also began managing then-heel, Val Venis to win the WWE Intercontinental Championship, but their partnership ended at SummerSlam after Venis lost the title. Stratus made her in-ring debut at the June 22 taping of SmackDown!, winning a tag team match with T & A against the Hardy Boyz and Lita. A storyline feud between Stratus and Lita developed after the match with Stratus attacking Lita on episodes of Raw and SmackDown!. This led to an Indian Strap match between the two women on the July 24 episode of Raw, which Stratus won with help from Stephanie McMahon.[ She finished the year competing unsuccessfully for the WWF Women's Championship numerous times, and separating from Test and Albert when the team disbanded

After almost three years as a fan favorite, Trish turned into a villainess at WrestleMania XX on March 14, 2004; by betraying Chris Jericho and dumping him for his rival, Christian. The couple spent weeks tormenting Jericho before they were defeated by him at Backlash. At the final Bad Blood PPV, the villainous Trish won her fifth Women's Championship and later reignited her feud with Lita by constantly tormenting her over her relationship with Kane. The two finally faced each other at Survivor Series on November 14, but it would end with Trish being levelled with a steel chair by Lita. A few weeks later, Trish lost the Women's Championship to Lita in a main event match on Raw, but she regained the title at the inaugural New Year's Revolution PPV on January 9, 2005.

Trish later targeted Christy Hemme during the unveiling of her Playboy cover; even going as far as spray-painting the word "SLUT" on her back. Trish went on to defeat Christy at WrestleMania 21, but she would be taken out by Viscera at Backlash weeks later. It was at that point that Trish's second run as a villainess ended; she returned in September as a babyface.

As a villainess, Trish was seductive, catty, and quite egomaniacal. She also expressed jealousy of certain Divas at times. As a blonde (her natural hair color is brown), she also bore a resemblance to Baywatch actress Pamela Anderson. 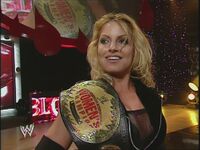 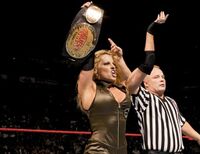 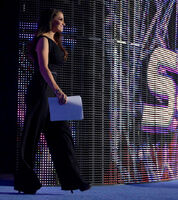 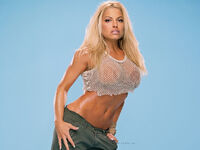 Wrestlemania 16: Leading Test and Albert to the ring

RAW 10 July 2000: Lita humiliates the evil Trish by ripping her top off during their match

Fully Loaded 2000: Lita gets her revenge and gives the evil Trish a taste of her own medicine

RAW 24 July 2000: Interrupting Lita's match so she can have the pleasure of whipping her

RAW 24 July 2000: A strap match is made between Trish and Lita, after Trish's attack on Lita earlier in the night...

Smackdown 27 July 2000: Seductively asking the commissioner to stop her upcoming match from happening...

Summerslam 2000: Kicking Eddie Guerrero in the ribs during a mixed tag match

RAW 11 September 2000: Getting some cheap kicks in on a fallen Kurt Angle

No Mercy 2000: Attacking Lita with a bulldog

No Mercy 2000: Enjoying seeing Lita's throat rammed in to the rope

No Mercy 2000: Smugly enjoying her assault on Lita

RAW 23 October 2000: Choking Lita with her own top during their match

Rebellion 2000: Leading Test and Albert to the ring

RAW 28 February 2005: Humiliating an unconscious Christy Hemme with spray paint
Add a photo to this gallery
Retrieved from "https://villains.fandom.com/wiki/Trish_Stratus?oldid=3554060"
Community content is available under CC-BY-SA unless otherwise noted.