Attacking anyone who she sees.

Kill anyone in sight.

Tristana Medeiros, known in Spanish as La Niña Medeiros is one of the two main antagonists of the REC series alongside Ángela Vidal. She was introduced in the first film and had an expanded role in REC 2. In REC 3: Genesis, she has a cameo that reveals she is the root cause of the demonic outbreak. Her origins are told by the character itself in the comic book REC: Historias Ineditas, released in 2012 alongside Genesis.Her counterpart in the American remake is Thin Infected Man.

She was portrayed by Javier Botet in every film of the series, who also portrayed The Crooked Man in The Conjuring 2, Mama in the film of the same name, the Leper, one of the many forms of It, in the 2017 adaption of IT, KeyFace in Insidious: The Last Key and Slender Man in the 2018 film adaptation of the same name. In the 2008 critically panned american remake Quarantine, Tristana's character was a man instead and renamed to simply Thin Infected Man, he was portrayed by Doug Jones, known for portraying the Pale Man and the Faun in Pan's Labyrinth, The Asset in The Shape of Water and also portrayed Ghoul Marcus in Ouija: Origin of Evil and a xenomorph in Alien: Covenant.

The horrific monster was originally a Portuguese girl named Tristana Medeiros, who lived in a convent and used to work as a cook. One night, while praying in her bedroom. Tristana was sexually assaulted by a group of priests and found by a nun in the morning, appearing to be dead. Tristana woke up during her vigil, reacting violently to the priest's religious prayers and being tied with ropes on her bed by the nuns. The girl stared at the inverted crucifix above her one last time and then closed her eyes, demonstrating the first signs of demonic possession immediately after opening them.

Still tied, the demon inside Tristana killed the nuns by screaming loudly and breaking the glass windows onto them. It then killed the priest by hitting him on the head with the crucifix. Horrified, the same nun who found Tristana after the rape manages to calm her down by injecting a tranquilizer into her neck. A possessed Tristana is kept controlled with the injections and tied to a crucifix, until the Vatican priests arrive, one of them being Father Alberta. The case made headlines and, some time later, Tristana was reported missing.

Somehow, Alberta took Medeiros to a pension building in Barcelona, where the demon was chained in the attic. Besides being a religious man, Alberta carried out scientific experiments with Medeiros' blood, using rats and nearby children as guinea pigs. The tests revealed to him that the possession worked as an infectious disease, in a way similar to influenza.

Alberta then concluded that he needed to kill the possessed girl, who had become a horrendous creature, to avoid a possible contagion. Alberta poisoned Medeiros' food, composed of human parts, and offered the meal to her. When the creature seemingly fainted, Alberta unlocked the chains and Medeiros woke up, leaving her closet to chase him throughout the apartment.

Alberta climbed to the air ducts, where the other infected children were trapped, and locked himself there to die. Medeiros began living in the apartment, supernaturally locked in the darkness, until she found a way out when a young woman named Ángela Vidal entered the room.

Father Alberta used rats to test the infection, and as the animals managed to escape, the virus made its way out of the attic. Ángela Vidal was a reporter that followed a group of firemen with her cameraman Pablo to the pension, where they ended up quarantined alongside the residents.

After the demonic virus infected everyone except Ángela and Pablo, the two survivors were corralled to the apartment in the attic. In the dark room, they found the news reporting Medeiros' case and Alberta's records about his experiments. As there was no light, they were only able to see Medeiros through the infrared, and she was then able to attack them.

The demon grabbed Ángela and inserted a worm-like organism into the woman's mouth, possessing her body and gaining the ability to leave the darkness, and consequently, the attic. Later that night, some floors below, she met a priest from the Vatican, Father Owen, who entered the building with a GEO team, seeking Medeiros' blood in order to create an antidote. The demon, pretending to be Ángela, followed the team to the attic where the demonic being somehow still lurked. The creature was then shot in the head by a violent Ángela, and the demon completely assumed her body, ready to leave the place. As Owen did not seem to allow anybody to exit the building, Medeiros killed him and faked his voice on the radio, stating that only one woman had survived the outbreak. 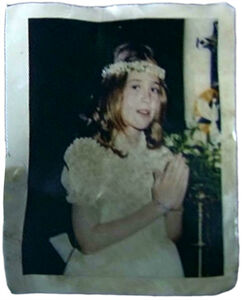 The Medeiros girl before the possession. 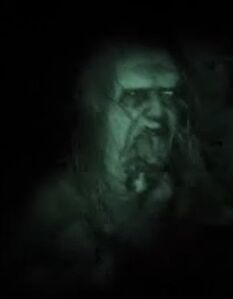 Tristana seen in the series. 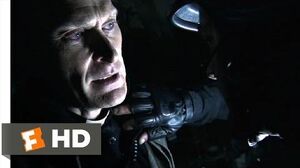 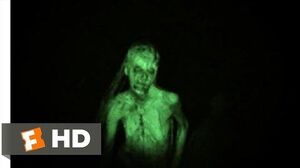