Leaders of the Decepticons

Arena Masters
The Triumvirate are a coalition who claimed leadership of the Decepticons after Straxus' death. They are antagonists in Marvel's Transformers comic series.

Sometime after Straxus' death, the Decepticons Legonis, Octus and Seizer took control of the Decepticons. Rather than wage war against the Autobots, the Triumvirate instead spending their time holding and watching gladiatorial fights.

Megatron eventually arrived on Cybertron with Ravage and challenged the Triumvirate's rule. The Triumvirate opted to throw Megatron into the arena and have him fight in a gladiatorial match. However, Megatron gave a speech about the values of the Decepticons that ultimately turned the Decepticons against the Triumvirate. The three ex-Decepticon leaders were then executed by the Triggercons. 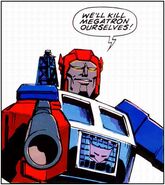