Defeat the Winx and conquer the magical dimension (failed).

Arrogant Magicians
The Trix are the main antagonists in the series Winx Club. They are known as the "Senior Witches", or more commonly, just "The Witches", in the English version. They consist of three young witches named Icy, Darcy and Stormy.

At the beginning of the first season, the Trix seemed to be more powerful than the Winx Club (with the exception of Bloom), as seen in the episode Spelled where they were able to get the better of the fight, and would have won had Bloom not intervened. For most of the first season, they attended the Cloud Tower School for Witches until they are all expelled after they created the Nightmare Monster in the episode The Nightmare Monster that failed to accomplish its purpose. The Trix stole the Dragonfire and summoned the Army of Darkness/Army of Decay to take over the realm of Magix, but Bloom defeated Icy with her dragon fire while the other Winx defeated Darcy and Stormy.

For the next two seasons they had powerful allies. After being sent to Lightrock Monastery, in the second season it was the infamous Lord Darkar who released them and gave them their Gloomix to increase their power. Darkar double-crossed the Trix in the end before he was killed and they were imprisoned in the Omega Dimension. In the third season, they joined up with Valtor and the three witches competed for his affections, before finally leaving him when he assumed his original, demon-like form and lost all the spells he had stolen when he was fighting Bloom in the 25th episode. Afterward they are sent back to Lightrock Monastery.

They returned again in the second movie, where they sneak into Alfea during the beginning of year festivities, putting a spell on all the food there so that everyone who ate some of it was turned into a toad, and stealing a magical compass which they used to lead the Ancestral Witches to the Tree of Life found in the Pixie Village. The Ancestresses proceeded to absorb all the essence of Good from the Tree, causing all good magic to disappear, and only evil magic to keep on existing. At the end of the movie, the Winx Club, the Specialists, Oritel and Erendor arrive at the haunted city of Havram to find the branch of the Tree of Life which the Ancestresses gave to the king of Eraklyon as part of the deal which forced him to help the Ancestral Witches in exchange for their sparing his kingdom.

There, the Trix and their Ancestresses were waiting for them, but the Winx Club girls gained back their powers and Bloom's horse, Peg, became a flying unicorn thanks to the magical branch. Finding the Trix too weak to defeat the Winx Club, the Ancestresses try to possess the Trix, but they attempt to flee as the old witches capture them and possess their bodies. The Trix, now possessed by their ancestors, have become more powerful than ever, as well as mere puppets possessed by the Ancestral Witches. The Winx, the Specialists, Oritel and Erendor take part in the battle, but Erendor is severely wounded trying to save Bloom from Icy-Belladone. Finally, using a Believix convergence, the Winx Club are able to summon the essence of the Great Dragon and extract the Ancestresses from the bodies of the Trix. The Great Dragon's power destroys the Ancestral Witches for good, and the Trix, defeated, fall unconscious to the ground. Helia ties them with a rope and, as the movie ends, they are shown as being suspended from the flying ship the Winx, the Specialists, Oritel and Erendor use to leave Havram, getting angry as Bloom and her friends fly around them and tease them.

The Witches' Gloomix is a plot element.

The Gloomix takes the form of a glowing necklace or wrist cuff with a single gem on the end. The Trix receive the Gloomix from Lord Darkar, and use it. So far, the only known witches to earn this are Icy, Darcy, and Stormy.

At the end of Season 2, when Darkar betrays the Trix and sends them to Oblivion, they merge together into the Mega Trix and three more Gloomix can be seen on them: a yellow zone and two green leg bracelets.

Gloomix is the witch version of Charmix, given to them by Lord Darkar and it makes them more powerful. However, while the Fairies obtain their Charmix naturally as the second level of their magical progress, it has not been precised whether other witches can also have a Gloomix or if only Lord Darkar can give one to a witch.

Shorly after Darkar's defeat (possibly within a week, since the end of year party occurred in the last episode of Season 2, and the Winx were already packing for vacations in the first episode of Season 3), the Trix were captured in Realix by the authorities of Magix and sent into the Omega Dimension, and the Gloomix had completely disappeared, perhaps since Lord Darkar, who had created them, had been destroyed. 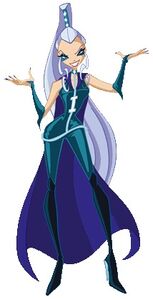 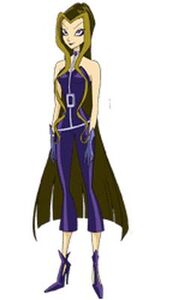 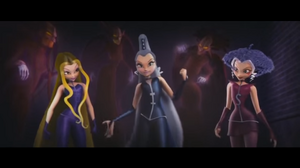 The Trix's appearance in Winx Club: Secret of the Lost Kingdom 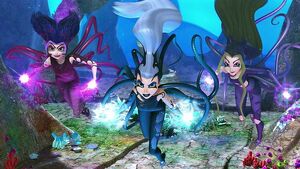 Trix appears in Winx Club: The Mystery of the Abyss 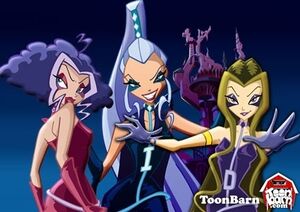 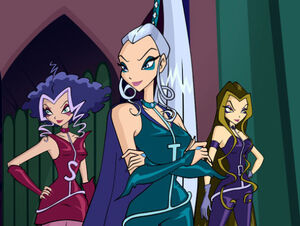 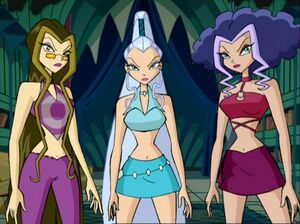 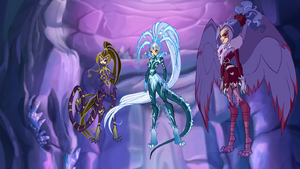 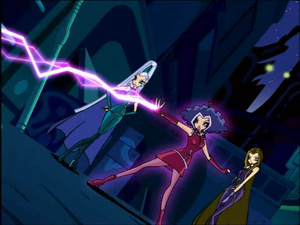 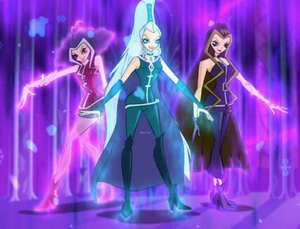 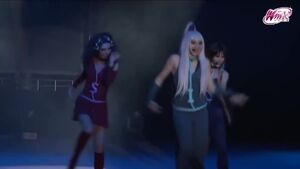 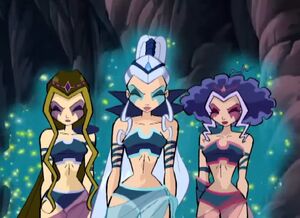 The Trix in Disenchantix form 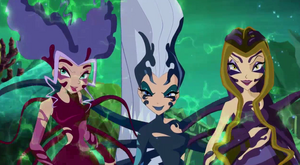 The Trix are given the Dark Sirenix powers by Tritannus 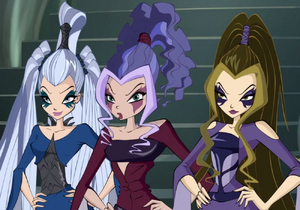 The Trix in Dark Witch form