Strong, large and presumably capable of performing minor magic (like most trolls)

Terrorizing those that cross his path

Devour one of the Billy Goats Gruff (failed)

The Troll (named Trevor in older tales) is the chief antagonist of the Three Billy Goats Gruff fairytale and was a monstrous troll whose greedy nature ultimately became his downfall - like many monsters in fairytales.

In the original story the Troll is given an actual name (Trevor) but in almost all retellings this name is rarely used - the same theme as the "modern" story is found in this one where three goats must cross a bridge to feed on green grass but the bridge is also the home of an extremely malicious and territorial troll, who harasses the three goats with threats of eating them, each time he is convinced to allow the goats to pass with a promise of greater reward later.

That is until the third and largest billy goat arrives, this is where the tale varies from modern versions and is much more violent - the troll declares he shall eat the third goat and the goat promptly warns the troll that if he tries the goat shall poke out his eyes and shatter him to pieces.

The troll, already being an aggressive and stupid monster, is furious at the goat and comes out from under the bridge to make good on his promise to eat it - only for the goat in turn to make good on his promise, he rams the troll and stabs his eyes out with his horns before knocking him down and trampling him, breaking every bone in his body (thus "shattering him to pieces") - the goat then kicks the broken corpse of the troll back under the bridge and joins his brothers.

Needless to say this version of the story is not common these days, due to a movement to remove some of the more graphic violence and other controversial content in traditional fairy tales.

Once upon a time there were three Billy Goats Gruff - often described as brothers - in search for greener grass they decided to cross over a bridge one at a time: beginning with the youngest, however no sooner had the young goat began to cross the bridge than the Troll emerged - declaring his intention to eat the goat, however the young goat managed to convince the troll to let him past, saying his older brother will prove the troll with a better meal: the Troll is very greedy and thus agrees, sparing the goat as he goes back into hiding.

As the second, older, goat arrives the Troll emerges again and declares his intention to devour the goat - yet the Troll is convinced once again to allow this goat to go free as he is promised an even bigger meal in the form of the third - and oldest - brother: unable to resist the chance of getting his hands on larger prey the Troll once again lets his would-be-victim past before going into hiding for a second time.

However when the oldest goat does arrive the Troll foolishly tries to ambush him with his usual threat of devouring - only to be easily knocked off the bridge by the stronger animal, the Troll is never seen again after this defeat and is presumably either killed or sufficiently humiliated that he moved to a safer hunting ground. 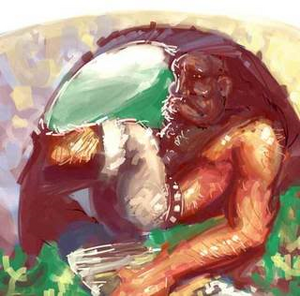 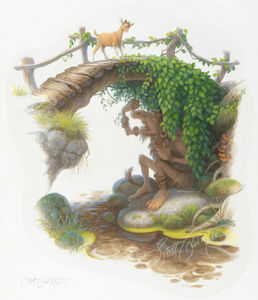 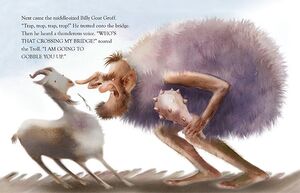 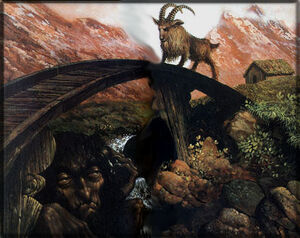 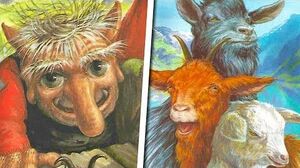 The Messed Up Origins of The Three Billy Goats Gruff Fables Explained - Jon Solo-2
Add a photo to this gallery
Retrieved from "https://villains.fandom.com/wiki/Troll_(Three_Billy_Goats_Gruff)?oldid=3904601"
Community content is available under CC-BY-SA unless otherwise noted.