Enjoying the smell of him in the morning

Fight the Skylanders under the orders of Noodles (failed)

Trolling Thunder is a minor antagonist in Skylanders: Trap Team. He serves as the secondary antagonist of the level Nightmare Express. He is an order-loving troll who confronts the Skylanders when they were following Noodles. He is trapped via a Tech trap.

The tank is a good-sized troll-shaped vehicle. The treads are fairly basic, metal tracks with a plate connecting them to the rest of the tank. Said plates have 4 stones attached at the front. The "face" have a real trolley look, having pointy, triangular ears with a golden exterior, yellow eyes and a golden (and bronze) eyebrow that is particularly furrow, and a small mouthhole under a shiny, chinlike plate. The gun looks similar to a nose, being in the middle of the tank "face". It is a shiny, bronze, and short and have an extra plate of metal on top of it. Strangely, the troll operating the tank is never seen.

Trolling Thunder first appears when Noodles was retreating to the Nightmare Express, as Trolling Thunder tried. to delay the Skylanders from following him with an armed with a huge tank but was then defeated trapped in an elemental tech trap. 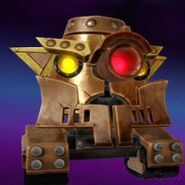 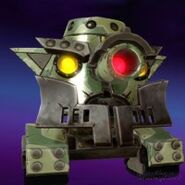