Various, but primarily from Earth

Trolls are a type of monsters found mainly in Norse mythology but has since spread into the realms of fairy tales and fantasy as a popular antagonist in countless tales - in the old tales trolls were seen as generally malignant and cruel humanoids ranging from gigantic size to humanoid or smaller statures (no one size description can fit them all) and were normally seen as hideously deformed, though they were often depicted with shape-shifting abilities and other magical powers.

While Trolls are seen as a species of their own right in many older tales the word "troll" simply means any number of malicious small-to-mid scale ogres or gnomes: in later tales a Troll is given a distinct physiology that consists of a large bulbous nose, wrinkled skin, a tufty tail and an often hunched form - they are also usually covered in coarse hair and are seen as smelly, stupid and violent.. a warning against "wild men" or the unknown, which many feared in the past.

More humanoid trolls also existed and in general these more humanoid trolls were seen as more pleasant, taking to wearing human clothing and even forming family and friends - in contrast to their ugly, monstrous cousins in the wild.

Trolls lived in mountains, rocks and caves - normally solitary creatures they sometimes lived in small family groups consisting of either a mother and her son or a father and his daughter, they rarely helped others and were often depicted as man-eaters, tricksters and violent: later tales told of how Trolls would turn to stone or explode if exposed to direct sunlight and for this reason many landmarks in Scandivia are attributed to Trolls. Also Scandinavian folk believes that lightning frightens away trolls and Jötnar which maybe a reflection of the deity Thor's role in fighting various monsters.

Trolls are also said to be able to smell the blood of Christians and like many pagan-spirits go into a rage upon finding Christians near their territories, the reasoning behind this is that Trolls once ruled Norway and the surrounding lands but the arrival of Christianity robbed them of their previous power, forcing them to flee into the wilderness and the bells of traditional churches hurt the Trolls ears (being sensitive to the sound of bells).

Legends persist of trolls who would throw large boulders at churches in anger and perhaps vengeance for these perceived wrongs but it is generally believed that the Trolls (much like other fairy folk) ultimately disappeared from Norway sometime in the past, though some people still like to envision them as being real beings (usually this is more for tourism or entertainment, very few believe in them as active supernatural forces in today's world).

Numerous tales from Europe are recorded about trolls in which they are frequently described as being long-lived, very strong (compared to humans), but slow, obtuse and dimwitted. However, trolls from other parts of European regions are depicted as looking much the same as human beings, without any particularly hideous appearance about them.

Trolls were also said to be afraid of thunder, which had strong connections to the Norse god Thor, who made a great habit of slaying giants, trolls and other malicious creatures during his rule in Norse mythology.

Trolls in Berserk are a rapacious predatory race from the nightmarishly dark spiritual world of Qliphoth. They are hairy, simian humanoid beings with black furs. Despite their feral appearances (and feral in habit), trolls have some degree of intelligence, as shown by their ability to utilize tools. Like many inhabitants of the Qliphoth, the trolls are born from the darkest thoughts of humanity's collective subconscious and thus are as beastly as the thoughts they were spawned from. The trolls have little ability for self-reliance, and thus often steal materials from humans. They are also cannibalistic, usually eating their own when one is either wounded or dying. Trolls also eat humans and livestock, usually during raids.

They seem to breed through impregnating human women that they drag to their lair by raping them ceaselessly day and night (from looks of women victims appearing emaciated they are raped with little to no foods until they are either impregnated or die of starvation), the women later dying when the litters of infant trolls claw their way out of the womb and eat the host parent's flesh: Indicating that Trolls' are prolific breeders and their maturity cycles are alarmingly fast.

It must be noted that although nothing more than nuisance against Guts and his party, Trolls are formidable monsters against normal humans.

Trolls appear in the 2010 science fiction film Trollhunter as hostile creatures which portrayal given a psuedo-scientific twist akin to the dragons from Reign of Fire. 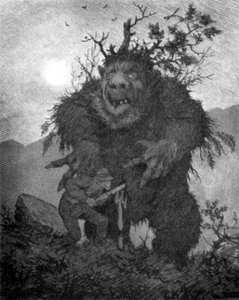 A troll battling a human 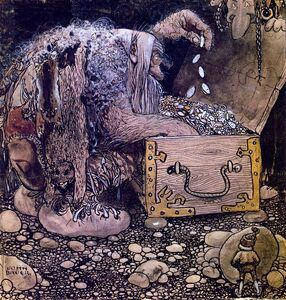 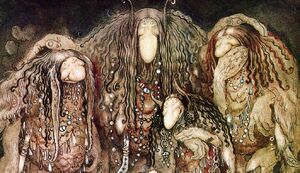 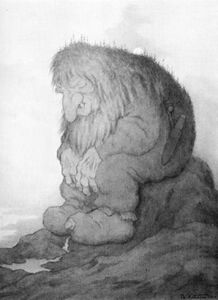 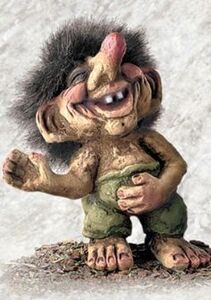 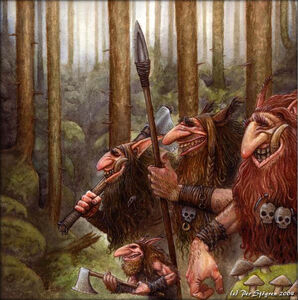 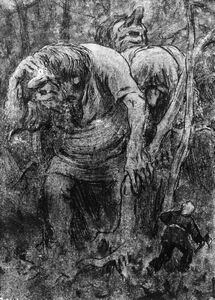 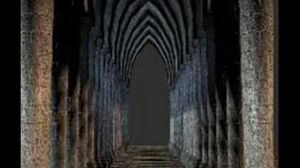 Grieg - In the Hall of the Mountain King