Tropiamon is a minor villain in the reboot of Digimon Adventure and Digimon Ghost Game. It resembles a plant-like dragon.

When Tropiamon defeated the jungle island, and captured all its Pomumon inhabitants with the help of Flymon minions, it then turned all the Pomumon inhabitants into fruit and began to rule the entire jungle island while the Flymon minions guarded it and the entire island. When Taichi and Sora heard of this, they set out to defeat Tropiamon and save all the inhabitants of Pomumon, and in battle they had to face its Flymon minions in battle. In the battle, Taichi and MetalGreymon were lost and turned into fruit, but they were saved thanks to Sora and Garudamon. When Tropiamon was firing its Tropical Venom everywhere, Taichi and Sora use their soccer skills to kick a fruit into its mouth followed by the Pomumon filling up its mouth with their Rapid Seed, clogging it. With Toropiamon vulnerable, MetalGreymon flips it into the air and he and Garudamon attack together, destroying Toropiamon.

Tropiamon is a Ultimate Level Digimon that seems to be a pretty ruler of the jungle. It is thought to have digivolved into its gaudy appearance by taking in the data of various trees and fruits. The scent from its body, which is like a mixture of all kinds of fruits, is so intense that those who are not used to it will be knocked out by force. The drops secreted from its leaves, which act like wings, are so toxic that they can even dissolve iron. 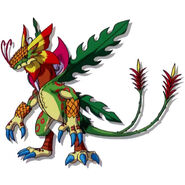