Before the Battle of the Bands

Defeat the other bands.

Trouble Clef is a band made up of the majority of antagonists in the show RWBY Chibi, the non-canon comedy spinoff of the American web cartoon series RWBY. The members include Roman Torchwick, Neopolitan, Emerald Sustrai, Mercury Black, a Beowolf, and Floyd the Geist. Though the villains are usually partaking in evil schemes to destroy the show's heroes, as Trouble Clef they are only interested in winning the Battle of the Bands at Beacon Academy.

Roman Torchwick founded Trouble Clef in "Monsters of Rock" (S2, E20). He intended for the band to be a break from their usual homicidal villainy and a way to embarrass and humiliate their enemies through the power of their amazing music and showmanship. He showed the band off to his employer Cinder Fall, who was not amused. Roman and Neo then showed off what they called the "Death Gun", which Cinder thought was the true purpose of the band: to distract the crowds with their music, then destroy them all with a powerful cannon. However, it turned out that it was just a prop that shot sparks, which Roman said would wow the audience and help them win. Disappointed, Cinder fires Roman as his hat catches fire, causing the Beowolf to perform a rimshot.

In the season 2 finale "Battle of the Bands", Trouble Clef enters the Battle of the Bands alongside some of the heroes' bands: Puns & Roses, The Neptunes, and P3N3. Roman assures the judges that they will win, and Ozpin announces that the battle has begun. Trouble Clef immediately begins playing heavy metal music, which the judges are seen enjoying, but they are interrupted when the other bands ask what they are doing. It turns out the "Battle of the Bands" is a literal battle between bands, and Trouble Clef was not prepared. The villains scatter. The Beowolf is bitten by Zwei, the Geist posesses the drums to hide, but is beat up by Nora Valkyrie, Emerald fights off Weiss Schnee and Penny Polindina, Roman runs from Penny and Blake Beladonna, but is knocked out by Penny's visor, Neo battles Yang Xiao Long, and Mercury gets ahold of Penny's tech and flies away.

It is assumed the band was disbanded afterwards. 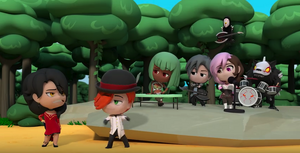 Roman shows the band to Cinder. 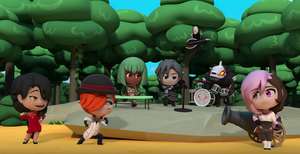 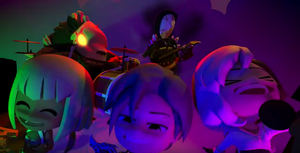 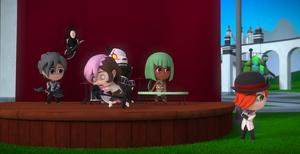 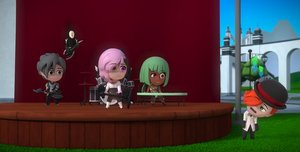 Trouble Clef is informed of the situation. 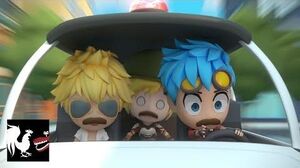 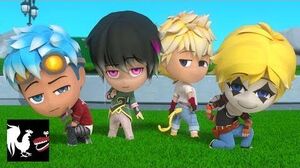