The Railway Series by The Rev. W. Awdry

The Troublesome Trucks are recurring antagonists in The Railway Series books by Rev. W. Awdry, and its TV show adaptation, Thomas and Friends. As their nickname implies, they are trouble-making trucks who are known for causing engines to crash, causing destruction and derailing, damaging or destroying themselves.

In the UK, they are called the Trucks and the Troublesome Trucks, but in the US, they are called The Cars and The Foolish Freight Cars. However, since the sixth series in the US, the term "truck" has been used more often. However, the US has been more consistent in using the term "car", unless referring to the Troublesome Trucks.

In US they were called the Troublesome Trucks since season 6.

In Toad Stands By, it was revealed that they had a leader named S.C. Ruffey.

It is unknown what the trucks' real names are or if they have any. However, there were a few trucks that have real names such as their leader, S.C. Ruffey, Fred Pelhay, Rickety and Old Bennett.

All engines who are wise and really useful know that trucks cannot be trusted. Trucks are considered the troublemakers of all rolling stock on the railway as most of them love causing mischief and trouble. Unless they get told off by their engine or controller, they do not show remorse for anything they did.

The Troublesome Trucks, as their names describe, are naughty, mischievous and troublesome due to playing tricks on the engines and intentionally causing them to crash.

Despite causing engines or trains to crash, the trucks are frightened of some of the engines such as Donald, Douglas and Oliver because Douglas caused the Spiteful Breakvan to be smashed into pieces (even though it was an accident) and Oliver caused S.C. Ruffey, the leader of the Troublesome Trucks to come apart causing him to break into pieces.

There are also a few engines that the trucks do not play tricks on, such as Edward, Stepney, Oliver (After the events of Toad Stand By), Salty, Hiro and Rebecca, as well as Toby and Mavis from fifth series onwards.

Trucks can also be considered territorial. When the trucks get used to certain engines pulling them, another engine in the yard taking them may cause the trucks to get angry and confused, especially if the new engine is overbearing and bossy. For example, in an episode called Percy's Predicament, an episode of the second series, Toby and Percy switched jobs. Percy began rudely ordering the trucks about, making Toby's trucks furious and they caused Percy to crash in retaliation. In Oliver Owns Up, an episode of the third series, the trucks refused to let Oliver take them, and they demanded that Duck, Donald or Douglas took them instead. However Oliver too was a little bossy and overconfident and paid the price for ignoring the warnings of how troublesome the trucks were from the other engines when the trucks pushed him backwards in the turntable well.

However in the episode The World Strongest Engine, Diesel comes to yard to show off and hopefully get rid of steam engines once and for all. The Trucks craftily use their tricks to allow Diesel's pride to be his undoing by egging him on pull just as many trucks as their engine Henry. Diesel gets as many as he can, but the Trucks haven't had their breaks undone, so Diesel can't move them. In the end he pulls so hard that his coupling snaps and he runs off the quay. The Fat Controller then sends him away in disgrace. After seeing everything Thomas and Percy admit that even Trucks can be useful if it means getting rid of someone like Diesel.

In other countries around the world, some trucks act very differently than the ones on Sodor as some are very polite and they were even willing to help the engines instead of causing trouble.

In season 1, the Troublesome Trucks' eyes and mouths were made of paper. However, in season 2, their faces have changed into the same type of faces that the engines have.

In some episodes, the troublesome trucks had faces that resemble a few characters' faces such as S.C. Ruffey, Toad, Bulstrode and the Spiteful Brake Van.

S.C. Ruffey (pronounced as "Scruffey") is the leader of the Troublesome Trucks, and appears as the main antagonist of Toad Stands By.

He got pulled apart by Oliver, but he was later rebuilt towards the end of the episode. In the original story, his remains were instead scrapped.

He also appears in the Railway Series.

The Official Website has confirmed that S.C. Ruffey is an old and experienced ring-leader and that he still works in Oliver's yard. The website also confirmed he helped the other trucks push Oliver down the turntable well.

Even though he is a one-time character in Thomas and Friends, S.C. Ruffey has received a few merchandise.

Fred Pelhay is an orange troublesome truck with coal inside of him who appears in the Railway Series.

Old Bennett is an old troublesome truck who appears in a magazine story called The Most Troublesome Truck. He is privately owned by Bennett & Co. 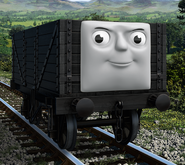 The CGI version of the Troublesome Trucks

Retrieved from "https://villains.fandom.com/wiki/Troublesome_Trucks?oldid=3482221"
Community content is available under CC-BY-SA unless otherwise noted.