Chief of Police (Saints Row 2 and Saints Row: The Third)

Take down the gangs of Stilwater. (formerly)

Help out The Boss

He is a member of the Stilwater Police Department. At first, he was an undercover policeman who was assigned to infiltrate a gang formed by Julius Little: the 3rd Street Saints. However, it became clear that he hated his job and still supports the 3rd Street Saints, including The Boss.

He was voiced by Michael Rapaport.

Troy is first encountered during the gang altercation in the opening scene between the three ruling gangs of Stilwater. The Protagonist is about to be murdered by a member of the Vice Kings for no other reason than "Wrong time, wrong place", when Troy shoots the would be assailant. It is discovered that Troy is Julius' second in command and, on occasions, he is part of the Protagonist's crew as they take back the row from the Vice Kings, Rollerz and Carnales. He is asked to be the Saints' leader against the Vice Kings, but he refuses and Johnny Gat Volunteers for the task.

Troy helped the Saints take out rival gangs on numerous occasions, but his real mission was to aid Police Chief Monroe and Alderman Richard Hughes in manipulating The Saints into destroying the other gangs of Stilwater so as to bring peace to the city streets and ensure Richard Hughes' election.

Suspicions may first be aroused of Troy's true intentions when Julius is arrested but only Gat and Dexter Jackson are present. Also when Julius Little is talking to the protagonist about the families the Saints have destroyed in the course of justice, Troy is seen in a bar, looking depressed and drinking away his guilt. Troy is first seen with his badge in the cutscene "Salting the Earth." It is the only time in the game that it is directly shown that he is a cop. He will be leaning against the wall of a building with the badge in his hand.

Years later, Ultor became the unofficial owner of the Stilwater PD. Johnny Gat made a vengeful attempt on Troy's life, but failed. This led to his imprisonment for over two years. After that, Troy gained a promotion to the position of Chief of Police, and was given his own office at the Police Headquarters.

Eventually the Protagonist awoke from his coma and became the leader of the Saints. According to the prison guards Troy refused to stop the life support machine that kept The Protagonist alive while in a coma, despite doctors' insistence he would never awake from it.

Troy's de facto boss and Ultor CEO Dane Vogel demanded that Troy release some of the Brotherhood's members after he was threatened by the Brotherhood's leader Maero. Troy was strongly opposed to the blackmail, but he had no choice because of Vogel's influence. When asked about the trial by Jane Valderama, he defers to Vogel. Troy also attempts to cover up the Saints' involvement in the robbery of Poseidon's Palace Casino, but fails at this due to leaked security footage.

When the protagonist infiltrates the police station and listens to Troy's wiretaps, several things are learned. First is that Dexter Jackson knew all along that Troy was a cop, owing to his tactics and "sh***y haircut." It is also learned that Troy was trying to convince Julius to get the Protagonist and Johnny to leave the Saints. A third and final wiretap proves that it was in fact Julius who planted the bomb responsible for the destruction of Alderman Hughes' yacht.

Later on, Troy can be called and recruited by The Boss to aid them in their missions. This can indicate that despite that Troy did seemingly betray the 3rd Street Saints, he didn't hold any grudges to The Boss and was still secretly loyal to the gang the whole time.

Troy isn't seen during Saints Row: The Third, but he is mentioned in the first mission "When Good Heists go bad" when the Saints rob a bank, and a swat member calls out "Troy can't bail you out of this one". This appears to imply Troy started covering up for the Saints and also shows he is still alive by the game's events.

Troy is absent once again during Saints Row IV and isn't mentioned. He dies off-screen when the earth is destroyed by Zinyak, although this isn't confirmed until the expansion pack Gat out of Hell. A photograph of Troy along with other photos of old characters can be seen in the simulated Saints Row Church that the Protagonist visits to rescue Benjamin King.

Troy is mentioned indirectly by Johnny Gat if he and Julius are called up as homies, where Johnny criticizes Julius for originally allowing a cop into the gang, even though Julius was not initially aware of Troy's true nature in the first game.

Saints Row: Gat Out of Hell

Troy perished during Zinyak's destruction of earth, and ended up in Hell. His punishment was for the betrayal of the 3rd Street Saints, but then later his fellow police officers as he was conflicted between the two groups (as seen in Saints Row 2).

Legal Lee looked for a way to work the system and have the years of Troy's sentence shaved off, because Troy only betrayed the Saints because of obligations with the Stilwater Police Department, but then turned his back on his police officers because of his obligation to the Saints. 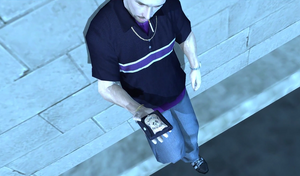 Troy is revealed to be a cop. 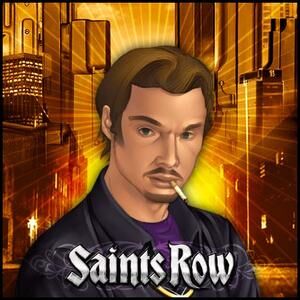 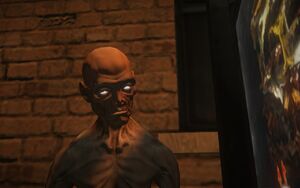 Damned Troy close up during the "Torment Fraud" activity. 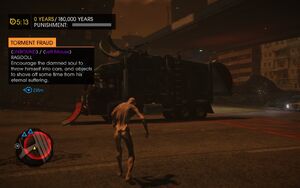 Gameplay as the Damned Troy in the Medium instance of "Torment Fraud".

This article contains content derived from the "Troy" article on the Saints Row Wiki, licensed under CC-BY-SA.