Start a Wiki
Trudly is a Miror B. Peon. In Pokémon Colosseum, he is never seen without Folly , as the two are always partnered together.

He is first seen with Folly by Wes at the Outskirt Stand, where they talk about how full they are from their meal and drive away with their truck. Wes next encounters them in Phenac City, where Folly battles him, since Wes overhears a conversation about the contents of the sack they were carrying.

Folly is defeated by Wes, and they both flee. Wes then saves Rui from the sack she was tied up in; Trudly and Folly had kidnapped her. Later, they both show up at the Mayor's House with the three Mystery Troops and Miror B. himself. Miror B. orders them to dispatch Wes and bring Rui back to Pyrite Town with them.

He and the Mystery Troops leave, and Folly battles Wes again and loses. Trudly steps up and is defeated, and his shadow Makuhita (the first shadow Pokémon) is Snagged by Wes. They both flee again. When Wes arrives in Pyrite Town, he finds the two sharing a small jail cell. They tell him that they turned themselves in for stealing the truck, and beg Wes not to inform Miror B. where they are. They fear the reprisals that would come to them for failing.

Later, Wes can get the Jail Key and open their cell. Even then, they refuse to leave. A short time after that they are transferred to separate cells when two more Miror B. Peons, Reath and Ferma, are captured and jailed in the cell the two male peons formerly occupied.

Once Wes has beaten Evice, all four prisoners escape. Folly and Trudly both flee to the Mayor's House, where they remain. They will battle with Wes one last time.

Their actual status as member of Cipher is foggy, as they may not know the entire plan beyond just what Miror B. told them.

In Pokémon XD: Gale of Darkness, they accompany Miror B. as he wanders Orre attempting to set up Team Miror B.

They like to lounge around, so they attach an antenna to Miror B.'s afro. When their Miror Radar pings, they immediately strive to look busy. However, after Michael beats Miror B. in the Cave Poké Spot, they accidentally drop the radar as they flee, and it is then picked up by Michael.

They also stole most of the Battle CDs from Realgam Tower, but threw them away once they found out that the Pokémon on the CDs were virtual.

Whether Miror B. is at a colosseum can be deduced by whether Trudly and Folly are in the colosseum lobby. 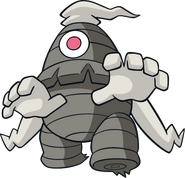 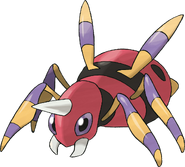 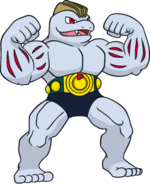 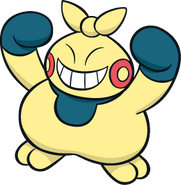 Makuhita (Shadow)
Add a photo to this gallery
Retrieved from "https://villains.fandom.com/wiki/Trudly?oldid=2006164"
Community content is available under CC-BY-SA unless otherwise noted.