Sacrificing and killing all those that have "tainted blood".

The True Eye is a religious doomsday cult and an antagonistic faction in the video game Dead Rising. They are an organized group of cultists led by the religious zealot Sean Keanan. The followers of this fanatical organization wear long yellow raincoats, yellow wellington boots, blue jeans and green masks which also gave them another name "Raincoat Cult".

The True Eye cult is a mysterious extremist organization. It is also unknown if Sean Keanan, the leader encountered by Frank West, was the original founder or an individual who took power once the epidemic reached it's height.

True Eye consisted of several individuals who believed in an unknown extent of religious worship and belief. Several encounters between Frank and the cult revealed some aspects of their beliefs; Sean and his followers believed by killing, or "sacrificing" other survivors, or "heretics" (those who are not affiliated with their organization), they would be spared from the ravenous zombie hordes and the possible reality of reanimation. Their religiously-influenced actions were displayed as fanaticism, evident by the cult's readiness to commit violence against any other survivor who was never part of their organization.

Their primary base of operations during the time-frame of September 19 to September 21 was Colby's Movieland. The cult seemed to have cleared the movie theater of the zombies and transformed the individual cinemas for their own purposes, filling them with mannequins, food, supplies and other inventory. Theater 4 was completely stripped of its patron seats and filled with barrels with fire, a few seats with spotlights on them, and a deformed mannequin with blood and nails protruding from it as well as the True Eye crest on its chest. A secondary base was established in a secret warehouse room near Leisure Park. This base was filled with a variety of equipment, including a ceremonial area where they sacrifice survivors after stripping them naked. There was also a set of cameras and relevant equipment also in the room; it is possible that was used to record the cult's extremist and insane actions.

The exact amount of True Eye members is unknown. Their presence in the Willamette Parkview Mall was one of the strongest and most organized in terms of numbers, second only to Frank and Brad's security room survivor group. Seeing as True Eye had the man-power to run out of two locations and terrorize local survivors, it can be safely assumed there were many more survivors of Willamette than previously guessed.

The group was encountered from September 20 onwards in various parts of the mall, in mid-sized groups chanting non-audible speech. True Eye's members seemed to have found a way to keep the zombie hordes from attacking them, as even though they remained absolutely still (until someone came close), the hordes did not seem to attack them as aggressively as other survivors. This could be an indication that the cult used smell to confuse the zombie's senses, or that their attire of yellow raincoats and face-covering mask made them seem as inanimate objects to the shuffling hordes.

Frank first encounters the cultists on the afternoon of September 20, when they are about to sacrifice a captured woman. Their leader, Sean Keanan, sees Frank from afar and declares him a heretic, sending his followers to attack him. After the incident with the woman, they can be found around the mall in large groups, completely oblivious to anything but Frank as he travels around the mall. Before Frank encounter the cult, there are posters with the True Eye symbol leading to theater 4 in Colby's Movieland. This is also the cinema where Frank comes face-to-face with the cultist leader, Sean, in a scoop. After the scoop is completed, no more cultists will be seen, presumably killing the last of them when they enter the theater after Sean's death. When a cult member is defeated, Frank will get a "Psychopath Killed" bonus of 500 PP, making them an easy way to level up.

The True Eye organization ultimately was disbanded or wiped out by September 21. The group had several hostile encounters with Frank West, who saw their religious fanaticism as dangerous for the innocent survivors. This hostility cultivated in the journalist infiltrating Colby's Movieland and confronting leader Sean Keanan to rescue a few survivors the cultic group had captured to sacrifice. Sean Keanan attacked Frank and forced the latter to kill him. Once Keanan was dead, some of the remaining members of True Eye rushed Frank and forced him to kill them to escape. The group's visible presence around the mall ceased after this, and it can be assumed that any remaining members fled or were wiped out by the zombies or Special Forces by the 22nd. 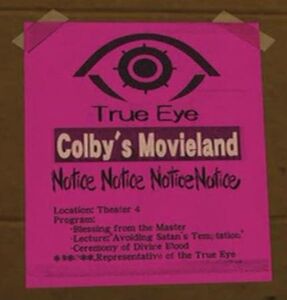 One of the many True Eye posters. 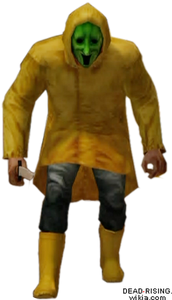 A member of the True Eye cult. 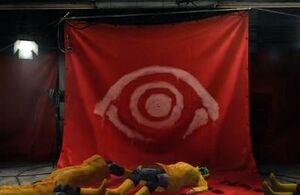 A red blanket in the hideout of the True Eye cult with their insignia on it.