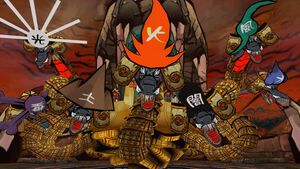 Following the advice of Waka, Amaterasu dragged Orochi down to the mortal plain, waiting for a person of a legendary bloodline who could defeat Orochi. Orochi settled in the Moon Cave and terrorized the inhabitants of Kamiki Village, selecting a young maiden as a sacrifice every year. Amaterasu was wrongly believed to be Orochi's familiar and given the name Shiranui.

Eventually, the person of the legendary bloodline, Nagi, was born. Although he antagonized Amaterasu at first, he teamed up with her to defeat Orochi after his beloved, Nami, was chosen to be the sacrifice. Shiranui died during the battle, becoming the legend of Orochi.

True Orochi is quite similar to his weaker present-day counterpart Orochi but has some alterations to mark his form at its peak of power. The demonic serpent still has eight heads, each bearing a unique element with its own kanji, going clockwise: Fire, Earth, Poison, Light, Lightning, Water, Wind, and Darkness. At the base of the eight necks is a shrine on a stone pedestal, with surrounding lanterns and plants, resembling a zen garden.

Retrieved from "https://villains.fandom.com/wiki/True_Orochi?oldid=3741878"
Community content is available under CC-BY-SA unless otherwise noted.