Truth (in Japanese: 真理, Shinri) is an anti-villain from Fullmetal Alchemist. It is the supposed supreme being of the universe and sometimes referred to as the Universe or World itself. Truth oversees all uses of alchemy performed and ensures they follow the laws and rules applicable. This includes punishing forms of alchemy that break laws of the pseudoscience through means that it sees fit. For Human Transmutation which breaks the rule of Equivalent Exchange, Truth brings the offender to their Gate, grants them its full knowledge and takes the things they might value most or that could be considered of equal mass to the intended product.

Truth is voiced by the actors of the characters confronting them and as such is voiced in the English version by Vic Mignogna, Maxey Whitehead and Luci Christian and in the Japanese version by Romi Park and Rie Kugimiya.

Truth's Gate was opened when the future Father used a Transmutation Circle created around the country of Xerxes to grant himself a body and give his friend Van Hohenheim immortality. This resulted in the souls of all other Xerxians being used to create Philosopher's Stones within the two.

Truth was worshipped and acknowledged by the Ishvalans as Ishvala, the supposed creator they named their country after and the Xingese as the Dragon's Pulse, a flow of energy throughout the world.

When Izumi Curtis performed Human Transmutation, something considered taboo in alchemy to bring back her stillborn child Truth took several of her internal organs causing her to become sterile and occasionally cough up blood.

Truth reacted after Hohenheim's sons Edward and Alphonse Elric attempted Human Transmutation to resurrect their mother and Hohenheim's wife Trisha Elric with Edward being brought before his own Gate. Truth appeared resembling a blank version of Edward himself, taunted him and opened the Gate to reveal information on the limits and laws of alchemy; Truth told Edward that in order to repay the knowledge and his attempt at bringing back human life he must pay with a sacrifice of his own. Truth then strips away Edward's leg and he is returned to the physical world to find Alphonse's body and soul taken. In a desperate attempt to save his brother Edward drew a Blood Rune on a suit of armor and transmuted again, giving Truth his arm in exchange for his brother's soul. However, Alphonse was left with almost no memory of the Gate or Truth.

The Ishvalan Scar claimed to be an agent of Truth but this was never taken seriously due to his use of alchemy while condemning it.

Truth appeared alongside many others to Edward in nightmares until he was eaten by Gluttony whose insides were an inaccurate recreation of the Gate. He transmuted using the organic matter within but gave a piece of Envy's Philosopher's Stone instead of more of his own being as payment. While escaping Edward saw Alphonse's body taken and used by Truth. Before he could reach it Edward was pulled back into his own Gate.

When Roy Mustang was forced by Pride and the Gold Toothed Doctor to open the Gate Truth took his eyesight despite the fact Mustang did not willingly perform Human Transmutation.

Father briefly gained Truth's power through adding the souls of Amestris to his Philosopher's Stone by opening the world's Gate and the sky's gate during a solar eclipse only for Hohenheim to reveal his own Philosopher Stone-powered Transmutation Circle in the form of the eclipse which reversed Father's progress; meanwhile Scar used a Reverse Transmutation Circle gained from his brother's research to dispel the nationwide Philosopher's Stone created by the history of Amestris and restore the country's alchemy to full potential. Alphonse later sacrificed his soul for Edward to regain his arm; as his body and soul were reunited Truth asked if Edward planned to come back for him to which Alphonse replied positively. Back in the physical world Edward was able to defeat Father with the aid of most of his allies.

Father's body was then destroyed by Edward after Greed weakened it at the cost of his life and his Homunculus form was brought back before Truth and the Gate. Truth proceeded to mock Father for always desiring and stealing the power of others and commented that even with removing his desires into the other Homunculi he could never surpass humanity. After remaining calm at Father's explanation Truth became serious as he expressed disgust and revealed his identity, proceeding to trap him inside where he came from and ignoring his pleas for mercy.

Truth then appeared before Edward asking what he will give to return Alphonse completely; Edward decides to give up his Gate thus losing all powers of alchemy. Truth was surprised by this and asked Edward how he would live without it to which Edward declared he still had friends and alchemy could be given as a fair trade. Realizing Edward has proven himself worthy, Truth accepts defeat and tells Edward his sacrifice was correct: the Portal to Truth was the price for performing Human Transmutation. Truth then frees the Elric brothers from their torment, returning them to the physical world at the cost of Edward no longer being able to use alchemy.

Truth's Gate was present when Edward had his arm and leg removed; Hohenheim was sent through the Gate by his ex-lover Dante and after Edward restored Alphonse's body he was transported through the Gate as well where they both ended up on a post-World War I, pre-World War II Earth. When Dietlinde Eckhart and the Thule Society attempted to access the world of Amestris, believing it to be Shambala they used Hohenheim and Envy as sacrifices to properly open the Gate after several failed attempts that resulted in test subjects being mutilated once they reached the other side. Unfortunately, when Eckhart fled back to Earth she was also mutilated and later killed by the counterpart of Maes Hughes.

The Eye of God is the entity located behind the Gate stated to be knowledge itself. No mortal can ever travel to its domain and whenever a law of alchemy is broken it drags the offender just beyond the Gate to instill the literal truth into their minds. However, there is speculation and probability that the entity and Truth are one in the same as they are both called God and share a connection to the Gate. When Edward sacrifices his Gate he is cut off from Truth and severs his ties to the being beyond. This would state that Truth and/or the entity are the source(s) of alchemy.

Truth is cunning and merciless but fair and wise. It believes in the upholding of alchemy's laws and rules by any means necessary and disobedience of them to result in harsh punishment. Truth always does what it believes is fair in trade and will forcefully take from offenders. Truth holds no bias, options or prejudices as it sees all who break the rules of alchemy as equal in their offenses and thus receiving of equal punishment by losing what they value. Truth shows no favorites of victims and no mercy or exceptions. Despite his ruthless personality, Truth is trying to uphold the laws that bind the universe and thus punishes any trying to perform acts that cannot happen. As shown in the end however, it is shown that Truth's brutality has a reason: It wants to teach humans that alchemy isn't everything and that it can in fact be devastating and crippling to those who are not good enough and that they musn't let themselves get arrogant no matter how genius they may be and learn to accept life and death as it is and continue on with their lives via the loved ones they still had. Indeed, when Edward was willing to give up his Gate of Truth and thus his ability to use Alchemy for good in exchange for his brother, not only did Truth humbly accept that Edward has learned to accept the laws of alchemy and allow him to rescue Alphonse, but it actually shows genuine pleasure at seeing the human that once defied him accept his limitation and acknowledge what's truly important in life and even admits Edward had defeated it. At the same time, while it brutally punishes those who tried to acquire his power, it is fair enough to actually give them the knowledge and power they wished in exchange for the punishment. He has also shown himself to be capable of showing consideration and respect towards others, as seeing Roy Mustang was forced to perform Human Transmutation, it actually inflicts a rather lenient toll by only taking away his sight, still gives him the ability to transmute without a circle, and later on allows him to be cured by a Philosopher Stone, even though he could have easily left it permanent, showing Truth has enough mercy and fairness as to leave behind hopes for those unfairly punished by him to be saved, and he also shows respect towards Alphonse for his heroic sacrifice to save Amestris, showing how it can approve of others breaking the laws of Alchemy if it meant saving the lives of many others.

Being the God of the Fullmetal Alchemist universe and the overseer of all alchemy in the world, Truth is the most powerful being in the series. Having absolute knowledge and power over Alchemy and all aspects, it is the only known being capable of granting others the otherwise unseen ability to perform Alchemy without a Transmutation Circle and it is also capable of inflicting nigh-irreversible damage on others in exchange, as shown when it took away Edward's leg and right arm, Izumi's ability to reproduce, and Alphonse body and also stripped Mustang of his sight. It also has the capability to restore what he had done, but only at the cost of an equivalently high exchange, as shown when he restores Alphonse's body after Edward willingly gives up his Gate of Truth.

Although Truth is never seen fighting, after acquiring his power, the already extremely powerful Father's alchemical powers and prowess was increased to godly levels, which indicated that Truth would be capable of replicating the same amount of destructive capability.

Truth is shown to appear differently to each individual, being a blank version of themselves. To all characters who encounter it Truth appears as a white featureless humanoid shaped like themselves. This version of Truth has no form outside of shape, a large white mouth and a haze of black outlining their figure. Truth also possesses anything it has taken from a respective individual: Edward's version has his arm and leg, Alphonse's version his whole body and Izumi's version her organs. When appearing before Father in his original form Truth appeared as a blank sphere with arms that could extend from it.

The Eye of God is a large, seemingly-reptilian dilated white eye with a gray iris and a black pupil. 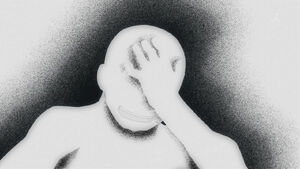 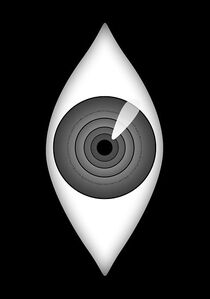 The Eye of God. 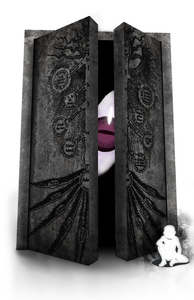 Truth at an opened Gate with the Eye of God staring. 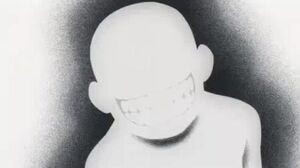 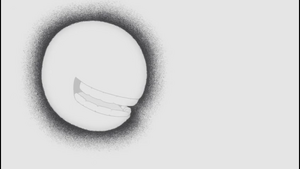 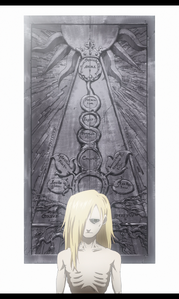 Alphonse Elric's Truth in front of a Gate. 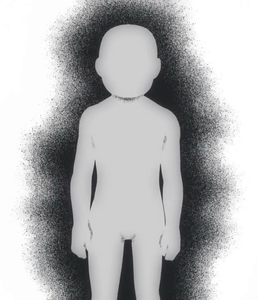 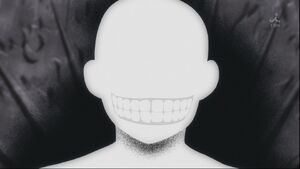 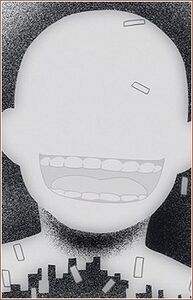 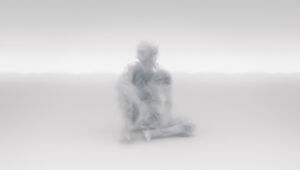 Truth in the live-action film.
Add a photo to this gallery 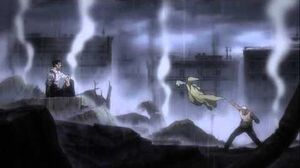 Retrieved from "https://villains.fandom.com/wiki/Truth?oldid=4271286"
Community content is available under CC-BY-SA unless otherwise noted.