Stop Mario and his friends.

Tryclyde is a boss and an antagonist in Super Mario Bros. 2 and Super Mario Advance. He is one of Wart's generals.

Tryclyde is a boss character in the game Super Mario Bros. 2 and Doki Doki Panic. He shoots fireball out of his three heads that you must avoid.

His species is a one-headed snake which also appeared as a minion of King Koopa in The Super Mario Bros. Super Show!.

At the end of the second world, the three-headed snake may seem like a fearsome foe at first. His attack consists of a fast stream of fireballs.

The only weapons the player has at their disposal to attack with are Mushroom Blocks. But before trying to hurl blocks at Tryclyde, his fireballs smash harmlessly into the blocks. 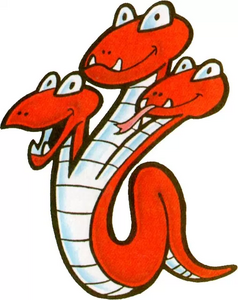 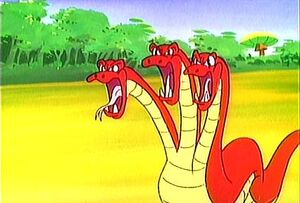 Tryclyde as he appears in The Super Mario Bros. Super Show!.