The Whisperer in the Darkness

God-like abilities
Control over an army of worshipping servants

Rule the universe alongside the Great Old Ones

Tsathoggua (also known as The Sleeper of N'kai) is a Lovecraftian deity who first appears in the 1931 novella "The Whisperer in the Darkness". Being one of the main Great Old Ones, Tsthoggua is a particularly devious avatar who has a fatigue fueled outline. As one could guess by his nickname, Tasthoggua dwells in the lightless cavern of N'kai with his unlimited infantry of fiercely loyal servants.

His servants include armies black blobs made of a corrosive goo and Voormis, a hostile race of cave-residing humanoids. His worshipers also take the god's toad-like appearance: the symbol of pure evil, fitting his demonic yet lethargic outline.

Covered in a coat of spine-chillingly dark fur, Tsathoggua appears as an obese male with several bat-like features, such as a pair of spikey ears, the aforementioned black hair, and a duo of soul-piercing red eyes. H.P Lovecraft himself also described the god to be physically similar to both a pudgy toad and sleepy sloth, matching his lazy, inactive personality.

The slothy deity has other appearances in pop culture, including books such as Gray Magic: An Episode of Ebion, Conon the Barbarian, and The Golden Apple.

Tsathoggua is one of many ancient ones that the players can choose to battle in the game Elder Sign. 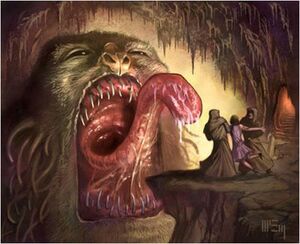 Retrieved from "https://villains.fandom.com/wiki/Tsathoggua?oldid=4082850"
Community content is available under CC-BY-SA unless otherwise noted.