The Tsuchinoko, also known as Noko in America, is a snake-like being. The name "Tsuchinoko" is prevalent in Western Japan, including Kansai and Shikoku; the creature is known as bachi hebi in Northeastern Japan.

Tsuchinoko are described as being between 30 and 80 centimeters in length, similar in appearance to a snake, but with a central girth that is much wider than its head or tail, and as having fangs and venom similar to that of a viper. Some accounts also describe the Tsuchinoko as being able to jump up to a meter in distance followed immediately by a second jump while still in the air.

According to legend, some Tsuchinoko have the ability to speak and a propensity for lying, and they are also said to have a taste for alcohol. Legend records that it will sometimes swallow its own tail so that it can roll like a wheel, similarly to the "hoop snake" of American legend.

It appears as an enemy in the Castevlania series which is known to include several popular cyrptids. The 3.0.0 update of Monster Hunter World added a capturable Tsuchinoko which could be added as a pet to the players room. 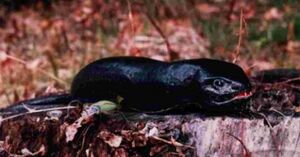 Retrieved from "https://villains.fandom.com/wiki/Tsuchinoko?oldid=3481783"
Community content is available under CC-BY-SA unless otherwise noted.