Depetrifying people of his choosing.

Recreate a new world with the strongest people.

Tsukasa Shishio (in Japanese: 獅子王司, Shishiō Tsukasa) is a major character in the Dr. Stone series. He was the main antagonist of the story. After getting caught in the petrification along with humanity and being depetrified by Senku to save him and his friends from a bunch of wild cats, Tsukasa took his opportunity to try and recreate a new world with the strongest and noblest people. To this end, Tsukasa wanted to kill Senku to stop him from reviving all of humanity and would smash the statues of people he deemed as incompatible with his new world vision.

Tsukasa was a calm and serious man who once despised the old world he was from. He did not like the corruption during the time period he lived in and was disgusted by the impurities that existed in older times. After humanity was turned to stone and after his revival, Tsukasa saw this as an opportunity to recreate a new world that is filled with people who are pure in his vision. Tsukasa was against Senku's vision of restoring all of humanity and saw that as a big problem because it would be reviving the same corruption that existed in the old world. Because of their conflicts in vision, Tsukasa resolved to murder Senku to prevent him from recreating the old world.

Tsukasa did not like those he knew were bad in the old world and would smash their statues. Knowing that smashing their statues were murder he did not care and would continue to destroy the statues of those he saw as weak or evil. Tsukasa wanted instead to revive the best that was among humanity and those who he saw as good. As emperor of the Empire of Might, Tsukasa was benevolent to the men he revived and wanted to maintain an empire where there was tools and technology but not too much like how Senku envisioned. Tsukasa was also merciful to his own enemies like Chrome and did not want to kill him despite the latter refusing to join him. Tsukasa, however, maintained his fear of Senku and only wanted to kill him and spare all his enemies.

Tsukasa has great respect of nature and was ideally against rebuilding humanity as it would be bring back the impurities of humanity. After facing a situation in his war against Senku, Tsukasa decides to stand down on his evil path and follow after Senku when the latter promised to revive his sister, Mirai Shishio. After her revival and healing of her illness, Tsukasa abandoned his old ideal and promised to protect Senku in his mission to revive humanity.

In the old world, Tsukasa was known as the strongest person in high school and was well known for his violent behavior. Tsukasa was also concerned with his sister's, Mirai Shishio's, health as she had a serious illness that left her in a comatose state. Tsukasa would wrestle and raise money and try his hardest to provide for his dying sister. At one point, a mysterious bright light appeared and all of humanity including Tsukasa was turned into a sentient statue. For about 3,700 years, Tsukasa remained unconscious as a statue. Unlike many of the statues that were destroyed upon becoming a statue or breaking over time, Tsukasa remained intact for 3,700 years.

In the New World

Tsukasa was depretrified by Senku Ishigami to help him and Taiju against a pack of wild cats. Tsukasa immediately defeats them. Senku with the nitric acid formula manages to revive Yuzuriha. Tsukasa was interested in the new world that he was revived in and felt that it was great. He smashed a couple statues of people he did deemed as terrible people. Senku was against his actions and called it murder. Tsukasa argued that they were bad people in the past and the petrification was a good opportunity to recreate a better world than the world they grew up in. Tsukasa soon got his hands on the nitric acid that Senku had and confronted Senku. Tsukasa also witnessed Senku creating gun powder. Tsukasa took Yuzuriha as hostage and was about to kill her so that he could lure in Senku.

After releasing Yuzuriha, Tsukasa told Senku that there is no way he can allow him to live in the new world that he envisioned if he was going to revive everyone and advance a scientific civilization. Senku surrendered to Tsukasa and Tsukasa offered to kill Senku instantly and painlessly by severing his cervical plexus. Before attacking him, he told him that he was one of his best friends. After knocking Senku unconscious, Tsukasa thought he killed him but he was attacked by Taiju and Yuzuriha who used the explosive black powder against him. Tsukasa was caught in the explosion and survived. He left and got a hold of the nitric acid.

With the nitric acid, Tsukasa picked the people he revived and built up his Empire of Might. At the same time, Tsukasa smashed multiple statues of people he did not want in his new world. Tsukasa soon became the emperor of his new empire. Taiju and Yuzuriha also infiltrated his empire and became members of his it. Tsukasa was wary of their intentions and thought that Senku was still alive after his attack. Tsukasa continued to revived multiple people that would help his empire grow. He revived his right-hand man, Hyoga, and multiple others like Homura so that he can build up a powerful military force. Tsukasa also build a grave-site in memory of Senku whom he thought he killed.

Tsukasa learned that Gen (one of the men he revived) betrayed him and learned from Hyoga's mission to Ishigami Village that Senku is alive. Tsukasa encountered Chrome when he was brought back to his lair by Ukyo. Chrome confronts Tsukasa and tells him that he did not like his plans. Tsukasa tells him that he did not want to get rid of all scientific tools but want to limit it and remake the old world. Tsukasa was about to kill Chrome for his resistance but decides to spare his life and imprison him. Chrome soon breaks out of prison and Tsukasa thought that one of his men, Yo, died during that time. Tsukasa went to a place that was supposed to be Senku's grave-site and mourned for him with Hyoga by his side. Tsukasa soon discover a cellphone buried at the grave-site.

Tsukasa and Hyoga made their way to the Miracle Cave to meet the other members of the Kingdom of Might. Tsukasa met Senku after a year and told Senku that he wanted him dead. The members of the Kingdom of Science fought Tsukasa and Hyoga but the two managed to overwhelm their enemies easily. After buying some time for Senku, the latter, Gen, and Chrome were able to create nitroglycerin. Senku created a paper airplane dipped with nitroglycerin and sent it flying into a tree nearby, causing an explosion. After seeing the damage that the Senku's weapon can cause and seeing that Ukyo have arrows dipped in nitroglycerin, Tsukasa decides to surrender to Senku.

Armistice and Fight Against Hyoga

Senku told Tsukasa that he will depetrify his sister and with the depetrification process, she could be revived even from the brain death she had before her petrification. Tsukasa agreed to his terms and Senku's armistice. After digging up her statue, Senku used the nitric acid to depetrify her. To everyone's relief, when Mirai was depetrified, she was also revived from brain death. Tsukasa embraced his sister and stuck around with her. However, moments later when Mirai was washing her face in a nearby river, Hyoga attempts to kill her but Tsukasa took the fatal blow to his chest. Senku tried to prevent Tsukasa from falling into the river but Hyoga pushed them in and followed him. Later at night, Hyoga confronts Senku about having him join with him to create a better civilization than before the petrification. While Senku tried to get away from Hyoga, Tsukasa attacked him and with the both his and Senku's effort manage to take down Hyoga.

Because Tsukasa was stabbed in one of his lungs and the lack of medical practitioners, tools and technology to deal with the traumatic attack, Tsukasa only had a few days left to live. While laying in a bed with bandages, Tsukasa rested. Senku suggested that the only way to save Tsukasa was to kill him and store his body in a cryogenic freezer and afterwards use the mysterious light that petrified humanity to turn Tsukasa back into a statue and revive him to undo his fatal injury. Tsukasa agreed to the idea and did not mind Senku killing him when he reminded Senku of when he killed him before. Soon when everyone was done creating the cryogenic freezer, Senku had one last conversation with Tsukasa and killed him. Senku placed his body in the freezer to preserve for when he needed to be turned back into a statue and be revived. 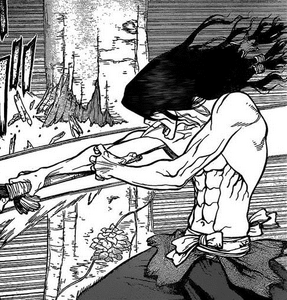 Tsukasa using his stone sword to cut down a tree.
Add a photo to this gallery

Retrieved from "https://villains.fandom.com/wiki/Tsukasa_Shishio?oldid=3540476"
Community content is available under CC-BY-SA unless otherwise noted.