Making sounds on her own (Benben)

Creating sounds of her own (Yatsuhashi)

Benben and Yatsuhashi Tsukumo, also known as the Tsukumo Sisters, are the stage four bosses from Touhou Double Dealing Character. They are both musical instrument tsukumogamis, a biwa and a koto respectively, that came to life because of Shinmyoumaru's wish.

The sisters reappear in the extra stage after making a deal with Raiko Horikawa to trade in their life source for a more permanent one.

Both Benben and Yatsuhashi were once merely an instrument used by others in the outside world, until eventually they came to Gensokyo. When the Miracle Mallet was used, its magical power flooded into them, and they both became tsukumogami at around the same time. However, they quickly learned where their power was coming from – the Shining Needle Castle – and decided to overthrow society, like Seija Kijin planned as well.

Benben has lilac hair which is short in the front and long at the back, and grey eyes. Her outfit consists of a brown black dress, with long white sleeves and a transparent layer on the skirt. She is barefoot and wears a small floral accessory in her hair. She also carries a biwa that is chained to her left hand.

Yatsuhashi has brown eyes and brown hair with a purple, black-trimmed headband. Dresses in a white blouse with light-purple and black trims, along with black skirt with a petticoat underneath and a purple ribbon on the back. Areas around her skirt are surrounded with seven red strings, to look like a Koto. She doesn't wear any shoes. 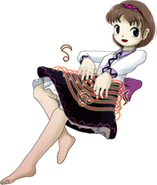 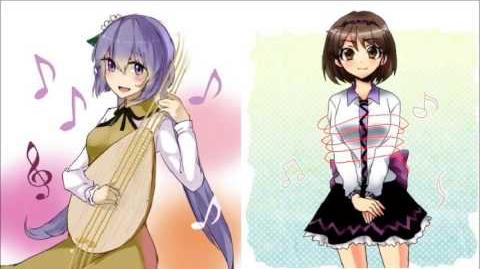