Kill Tarzan and Kerchak to become new leader of the gorilla family for himself (failed).

Use Terk as bait to lure Tarzan into a trap and kill him (failed).
Capture and eat Tarzan, Jane, Tantor, Terk, and Professor Porter (repeatedly failed).

Tublat is a monstrous gorilla who appears as one of the main antagonists of Disney's animated TV series The Legend of Tarzan, the other being Queen La. As Kerchak's rival, he aggressively tried to take over control of the family, but was quickly banished. The banishment only worsens his evil, turning him bitter, rage-filled, and, shockingly, carnivorous and willing to kill anyone who crosses his path.

With Tarzan in charge of Kerchak's family now, he seeks to defeat him and assert himself as the leader of the gorillas. Because of this, he is Tarzan's archenemy. Strangely enough, while the books portrayed Kerchak as being the brutal and destructive one, but he was made more sympathetic by Disney, using the book's portrayal of Tublat as being benevolent, Disney's version of Tublat suffered the complete opposite (he’s changed into a villain using the original version of Kerchak's personality). His strength is extreme, even by gorilla standards.

He was voiced by Keith David, who also played Dr. Facilier in The Princess and the Frog, and Malcolm Kane in Stretch Armstrong and the Flex Fighters.

Many years ago, Tublat was a member of Kerchak's family. However, he was incredibly violent, constantly looking for any reason to fight his fellow apes. One night, while Tublat had another gorilla in a choker hold, Kerchak stepped in and ordered him to release the ape. Tublat obeyed this order only because he was bored with fighting weak opponents and saw Kerchak as a much better challenge than the rest.

Tublat and Kerchak wrestled and were evenly matched, but Kerchak managed to get Tublat in an unbreakable hold and demanded his surrender. Tublat pretended to concede, and when Kerchak's back was turned, Tublat grabbed a branch and used it to knock the ape leader unconscious. But before he could finish Kerchak off, a young Tarzan threw several coconuts into his face, distracting him while also breaking his nose. Enraged by this, Tublat lunged at Tarzan, but was stopped by Kerchak, who then threw the mad ape off a small cliff into some rocks.

Seeing that he was too dangerous to allow in the family, Kerchak banished Tublat from the tribe forever. Before leaving, Tublat retorted this by stating that once Kerchak leaves this world, the family will be his to claim. Tarzan then tried to comfort Kerchak, but instead of being grateful for saving his life, Kerchak bitterly scolded the boy for interfering in his battle.

A violent and destructive thunderstorm has Tarzan, Jane Porter, and the rest of the gorilla family seeking shelter in nearby caves, but they have chosen the same cave that the banished gorilla Tublat lives in. Tublat first kidnaps Flynt in the hopes of leading Tarzan into a trap, which succeeds. Tarzan is physically no match for Tublat, and after he is defeated in a battle, Tublat proceeds to kidnap Jane, Terk, Kala, Professor Porter, and the rest of the gorilla family. But using his superior cunning, speed, agility, and ingenuity, Tarzan manages to defeat Tublat and rescue the gorillas. However, Tublat had escaped the waterfall and rampaged through a forest vowing to come back another day.

Niels and Merkus return to the Jungle to mine diamonds. Tarzan agrees to this as long as they stay away from the gorillas. Neils and Merkus are threatened by Tublat, who attempts to kill them, but they capture and plan to make money off him. Tarzan is initially tempted to let them take him due to their past conflict. However, after he talks to Jane about it, he knows that the right thing to do would be to rescue him. So in spite of Terk's similar protests about their history, he sets out to rescue Tublat with her help, which he does. Tublat tells Tarzan that just because he rescued him doesn't mean he'll be grateful, but Tarzan wasn't expecting thanks anyway.

In this episode, Tublat appeared as the leader of the family of a gorilla named Gobu, whom Tarzan had earlier nursed back to health after he found him being attacked by a pack of hyenas. Gobu states that a few months before the events in that episode took place, Tublat killed the family leader and took over control, content to take over another family rather than Kerchak's. He also forced Gobu to gain Tarzan's trust and bring him to him directly under threat of mutilating or killing Gobu's relatives. Relishing the long-awaited opportunity to kill Tarzan, Tublat has his minions pursue him after the ape man escapes and blackmails him into compliance by threatening Terk (who had also traveled to find Gobu and pursue a relationship with him). To save his friend Tarzan, concedes to allow Tublat to have his way with him. Eagerly intending to do so, Tublat is intercepted by Gobu himself.

Emboldened by Tarzan's earlier speech towards him, Gobu openly speaks out against Tublat, claiming he is dependent on the family to secure his victory over Tarzan. Seething with rage, Tublat attacks Gobu with lethal intentions for his defiance, stating maliciously that he has outlived his usefulness. After beating aside the intervening Tarzan, Tublat grabs Gobu in a bear hug to crush him to death. Gobu cries out to his family encouraging them to stand together and face Tublat and that they are stronger than he together. Inspired and bolstered by his words, the family turns on Tublat and overpowers him. Driven off, Tublat lets out a roar of anger before fleeing. With he and his family now free from Tublat's reign of terror, Gobu steps up to lead them.

Tublat is an incredibly mean, ungenerous, bellicose, and obstreperous gorilla who challenged Kerchak for leadership, but he was defeated and cast out. He is considered to be the most dangerous and destructive by all of the gorillas. He is based on Kala's mate (and Tarzan's foster father) in the original Tarzan novel. His personality is also very much like the original Kerchak or Terkoz from the novel.

He took over another gorilla family to which Gobu belonged to by murdering the leader of that family one time. But the family (with Tarzan's help) overthrew him and Gobu replaced him. He often calls Tarzan a "hairless runt." He has four toes on his right foot, and this is one way to tell he is in the area. He is also shown to be increasingly abrasive and cantankerous towards his fellow gorillas. 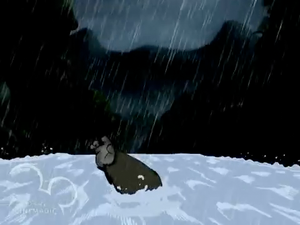 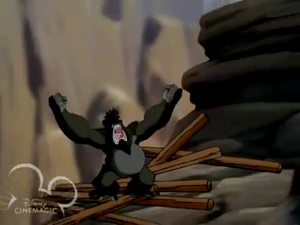 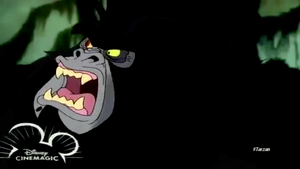