Villains Wiki
Register
Don't have an account?
Sign In
Advertisement
in: Marvel Villains, Agents of S.H.I.E.L.D. Villains, Supremacists,
and 36 more

High-ranking member of the Watchdogs

Hunt down and kill every Inhuman across the world.

Tucker Shockley is a supporting antagonist in the LMD arc of Season 4 in the TV series Marvel's Agents of S.H.I.E.L.D. He is a member of the Watchdogs and the right-hand of Anton Ivanov, before becoming an Inhuman who can explode and regenerate.

He is portrayed by John Pyper-Ferguson.

Before the events of the season, Shockley, at some point, joined the Watchdogs and became the right-hand of the co-leader Anton Ivanov, better known as the Superior.

He is first seen under the orders of corrupt anti-Inhuman senator Ellen Nadeer, as he readies his men to kill her Inhuman brother, Vijay. He then gets a phone call from Nadeer's assistant who alerts him about Jemma Simmons. Shockley then tells him to kill her before hanging up. Upon revealing himself to the Nadeers, Shockley prepares to execute Vijay. However, after he persuades Ellen to reconsider, she orders Shockley to let him go, much to his annoyance. Shockley later argues with Nadeer and how she may be Inhuman as well considering that they are siblings, therefore insulting her.

Shockley then called Ivanov and was given orders to proceed with the execution regardless. However, just before they were able to, Vijay's powers were awoken and gave him the advantage. As S.H.I.E.L.D. arrived on the scene, Shockley and the Nadeers escaped in a helicopter. He then witnessed Ellen tearfully killing her brother, where she demands that he doesn't question her again. She then tells him that it's time Ivanov steps in to fight S.H.I.E.L.D. and that he must get rid of Vijay's brother. He does so by dropping it in the ocean, unaware that Vijay underwent Terrigenesis again.

Shockley was then sent by Ivanov to lead the capture of S.H.I.E.L.D. agent Billy Koenig to locate the Darkhold. He is later shown mercilessly beating Koenig for the location of the book, but to no avail. He then threatens Koenig and a "captured" Holden Radcliffe how Ivanov would be the next one to torture them and how he will break them. He then oversees Radcliffe and Aida submitting Koenig to a simulation that would allow them to see his memories. After hearing Radcliffe confirming the Darkhold's whereabouts, Shockley sided with Ivanov of how they should torture Koenig to confirm it. He then gets assaulted by Aida, who was revealed to be an android. They then agree to Radcliffe's claims.

Shockley brings Koenig and Radcliffe to the library where the book was located. After handing over Billy, they then end up in a shootout which results with Shockley and Radcliffe escaping with the book. They then celebrate with Ivanov by drinking vodka and smelling onions, where Ivanov explains to Radcliffe that he is obsessed with killing Phil Coulson, whom he holds responsible for many of events that affected mankind in recent history.

Shockley and Ivanov met with Radcliffe, where they discussed the use of the Darkhold and the plans that they had for Inhumans. Shockley then voiced his concern regarding the new Terrigen crystals, but the doctor assured him that it will only transform Inhumans and not kill humans. Ivanov then had Shockley visit Nadeer to use a crystal and test if she was an Inhuman or not, regarding that her brother was. Although he broke the crystal and released the Terrigen mist, she did not transform but he did. As she arrogantly mocked his predicament, he exploded, killing her and her staff instantly.

He escaped during the chaos and met up with Ivanov, who accused him of going against the plan. Shockley lied, claiming that she turned before exploding and that he doesn't know how he escaped. Knowing that S.H.I.E.L.D. would come after him, Shockley allowed himself and some other Watchdogs to get caught so that Ivanov can escape. Upon awaking on Zephyr One, he was interrogated by Quake, who demanded to know where Radcliffe was. Uncooperative, he demanded Director Jeffrey Mace in which they accepted. Taking this opportunity, he began to charge himself to explode, but not before the agents caught on and threw him into a containment module and ejected him just as he exploded.

Regenerating on the ground, Shockley killed a man, took his clothes and his car before heading towards the nearest cafe. He called Ivanov and confessed about his Terrigenesis. Although Ivanov considered abandoning him, Shockley pleads for his approval as a soldier and that the plan still hasn't changed. He then blows up the cafe to catch S.H.I.E.L.D.'s attention. Hours later, Shockley taunted Quake as he attempted to kill her with his powers. She, however, uses her powers to constantly make him explode so he can get exhausted. But, he then points out that he was bait and that Ivanov was coming for them. Regardless, after being caused to explode by Quake once more, Simmons and Leo Fitz arrive and suck his ashes into a pod to seal him up, therefore capturing him for good. However, in the process, Mace was captured by Ivanov.

Tucker Shockley is Inhuman member of the Watchdogs who achieved his genetic potential after undergoing Terrigenesis, and thus achieving superhuman powers. 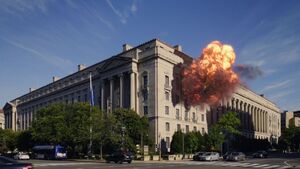 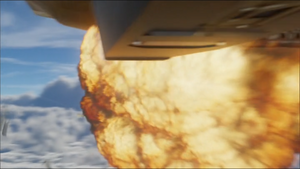 Shockley trying to destroy Zephyr One. 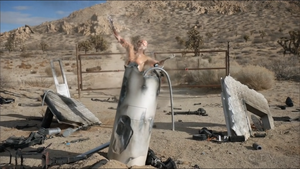 Shockley's body reforming after the explosion. 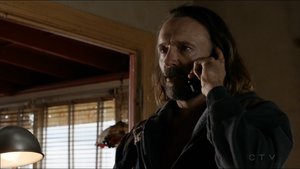 Shockley confessing to Ivanov over the phone. 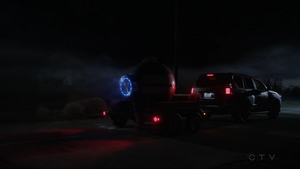 Shockley is captured by S.H.I.E.L.D.