Buy as much Blue Sky from Walter White and Jesse Pinkman as possible.

Get into business with Heisenberg (both failed).

He is a psychotic Mexican drug kingpin who briefly became the meth distrubitor for both Walter White and Jesse Pinkman respectively; as such, he also had encounters with corrupt lawyer Jimmy McGill and hitman Mike Ehrmantraunt. It was clear early on that Tuco is unpredictable and prone to such violent outbursts, but he surprisingly valued Walter because of the latter's superior product - in addittion to Walt's intelligence and business style that are added by his seemingly calming demenaour.

The character was portrayed by Raymond Cruz.

Born in 1961, Tuco Salamanca was the nephew of a powerful drug lord by the name of Hector Salamanca. Raised by Hector like a son as he grew up in adulthood, Tuco became addicted to meth - which caused a toll on his mental health and made him extremely prone to fits of rage, which installed fears in his own men. At one point, there was an incident where he to shot one of his associates, Dawg Paulson, to death in 1998 with a sawed-off shotgun right to the face. Despite his ruthless nature, he did learn the value of family from his uncle, leading him to take care of and deeply love both his uncle and his grandmother. Eventually, Tuco hired three men as his main bodyguards; No-Doze, his brother in-law Gonzo, and Ignacio "Nacho" Varga, the lattermost of whom would become his right hand man.

Tuco was making tacos for his grandma when she arrives home with two twin brothers who were berating her for "hitting" one of the twins with her car and driving away. In reality, this was due to a scam gone wrong that was devised by Jimmy McGill. Once they insult his grandma by calling her a biznatch, he has her go upstairs, telling her he'll handle them. Enraged at them for insulting her, he knocks them both out with her cane, ties them up and locks them in the garage. Once Jimmy arrives at his house, Tuco takes him at gun point into the living room. Jimmy manages to convince Tuco to let them go, but one of the twins, not knowing he was planning to do so, panics and tells him it was the lawyer's idea to scam him. Angry and confused, he calls No-Doze, Gonzo and Nacho to meet with him.

They meet in the desert, where Tuco also brings a tied up and gagged Jimmy, as well as the twins, to interrogate him. Jimmy tells him he is a lawyer and he did plan on having the twins scam someone so she would let him represent her, by pretending to get hit by her car as he driving, but the twins mistook his grandma's car for hers due to them looking alike. Tuco is unconvinced and threatens to cut fingers off. Panicking, Jimmy lies and tells him he's an undercover cop. Nacho is unconvinced and manages to get Jimmy to tell them that he is indeed a lawyer and lied about being a cop because they scared him into doing so.

Nacho gets Tuco to let Jimmy go due to the risk of killing a lawyer, but Tuco still intends to kill the twins as revenge for insulting his grandma. However, with Jimmy's smooth words and lawyer skills, he convinces Tuco to break their legs instead of killing them, to which he does.

Nacho eventually becomes nervous about Tuco's unpredictability, so he and Mike Ehrmantraut devise a plan to get him arrested. After their meeting with Krazy-8 at his uncle's restaurant Mike drives over and bumps his car. Angry about this, Tuco demands that Mike pay him. Mike refuses, so Tuco pulls a gun on him. Unbeknownst to Tuco, Mike had called the cops earlier in preparation for this. Once they arrive, Nacho leaves and Mike manages to disarm Tuco and get him to beat him up infront of the cops. He is then arrested and sentenced to jail for 8 years. However Hector manages to get his jail time reduced by threatening Mike to convince the police it wasn't Tuco's gun they found. Tuco is later put in solitary confinement for stabbing another prisoner to death and assaulting one of the guards.

Two years later, Tuco's cousin Lalo visits Hector, reminding him that Tuco is getting out in eleven months. When Lalo introduces Nacho to Don Eladio, he points how out the man has been working for Tuco for years, causing the don to briefly mock him and ask if he's alright in the head, referencing how insane Tuco is.

After Tuco gets out of prison and his uncle is paralyzed from a heart attack, he becomes Albuquerque's biggest drug kingpin, second only to Gustavo Fring and possibly Krazy-8, all while taking care of Hector at his house. Following Krazy-8's death, Walter White and Jesse Pinkman try to find a new distributor for their meth. Eventually finding out about Tuco, Jesse has a meeting with him. Tuco is immediately impressed with the meth but refuses to pay Jesse right away. Jesse does not take kindly to this so he threatens to take the meth away unless Tuco pays him now. Therefore, Tuco assaults Jesse and steals the meth. Walter decides to confront Tuco, so he arrives to Tuco’s headquarters with a bag of fulminated mercury. Walt demands $50000 for stealing his meth and assaulting his partner, to which Tuco insults him for thinking he does a dumb move by trying to confront him an bringing more meth, to which Walt responds by picking up a bit of the fulminated mercury and throwing it to the floor, causing an immense explosion. Tuco agrees to pay the money after this threat, showing some respect for Walt in the process and agreeing to be their distributor.

During his first meeting with both Walt and Jesse at a junkyard, Walt is low on product but convinces Tuco to give them the full payment, stating that he will have more by their next meeting. Tuco is annoyed by this, but decides to pay them anyways. During their next meeting, Tuco gets a dose of Walt's new blue meth, and is once again impressed by the product. However, No-Doze inadvertently insults Tuco as well as their new business partners so Tuco, now high on the crystal, beats him to death. After he recovers, he tries to force Walt and Jesse to revive him, but to no avail. Tuco has Gonzo hide the body in the junkyard.

After Gonzo dies in an accident while checking on No-Doze's body, Walt and Jesse suspect Tuco. Thinking they are in danger, they devise a plan to poison him with ricin. However he kidnaps them, planning to take them out of the country to produce more meth once his twin cousins Marco and Leonel Salamanca arrive to pick them up so he can avoid getting caught by the DEA. Walter tries to poison Tuco with ricin but Hector sees it, and despite being paralyzed, is able to stop Tuco from taking the poison. Tuco and Walter then fight and Tuco is shot by Jesse but survives. However, Tuco is then found by Walter's brother-in-law Hank Schrader. The two engage in a gun fight and Tuco is shot dead.

Despite this, he still has a lasting impact on the show as Hank becomes traumatized from killing Tuco and as a result of Tuco's death, his cousins arrived to kill Walt and Hank, but only succeeded in crippling the latter. While Marco was killed in self-defense, Leonel was crippled and poisoned in the hospital by Mike.

Tuco is insane, violent, dangerous, and manipulative. His unpredictability, psychotic outbursts, sudden mood swings, love for drugs and ruthlessness terrify most people around him. He killed his own man No-Doze simply because he finished his sentence with his own hands and showed almost no remorse over it, and actually proudly displayed his bruised knuckles to Walter and Jesse after doing the deed. He also shot at cows from his uncle's house with a semi automatic rifle, showing sadistic glee in doing so.

Tuco seems to admire guts and does have scarce good qualities. He was impressed when Walter White demanded money by himself after he had just hospitalized Jesse and continued to gain more respect for Heisenberg because of the quality of his product. He is also very affectionate for some people. He looks after his uncle, Hector Salamanca and his grandmother, as well feeds and houses them. He was also outraged when he thought his partner, Gonzo, betrayed him by going to the police as he states he "trusted him like a brother". However, he's not completely remorseless, as Nacho mentioned he felt "kind of bad" after killing Dawg, having apparently liked him, and said that beating up No-Doze was "messed up", although he quickly brushed it off.

Tuco seems to have no idea or understand the importance and value of family, despite deeply caring for his own. After kidnapping Walter and Jesse he proposes to go in to the meth trade together and when Walter says he can't leave his family Tuco replies "you can get a new one". Also when coming to terms with Gonzo's apparent betrayal, he screams to the two of them that they can "never trust the people they love". 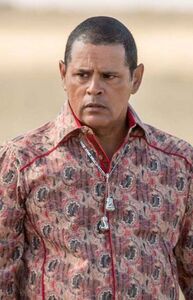 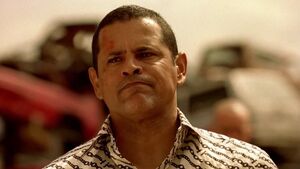 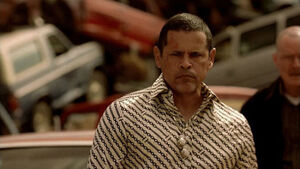 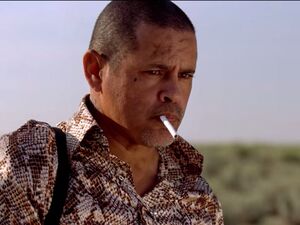 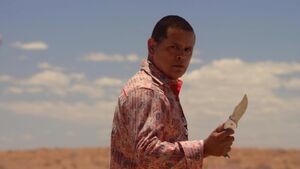