Prince of the Jing River

Usurper and ruler of the Black River (formerly)

Tuolong is the ninth son of the Dragon King of the Jing River. When his father was beheaded for violating the Heaven's rules, his uncle, the Western Dragon King placed him in the Black River until when he learns to be a person. Unfortunately, Tuolong didn't listen to his uncle's teachings: He usurped the home of the river's deity, and waited for Xuanzang's arrival, knowing that eating the monk would grant him immortality.

Tuolong first appeared posed as a boatman, pretends to ferry Xuanzang across the river, and captured Xuanzang and Zhu Bajie when they are unaware. Sun Wukong, recognized the boatman to be the culprit, told Sha Wujing, who then went into the river to see the truth, and learned that Tuolong intended to use Xuanzang for his uncle's birthday, wanted to invite his uncle to eat the monk so they can achieve immortality together. After Wujing destroy the gate of Tuolong's cave, the two fought. Wujing lost the fight, and retreated back, told Wukong everything happened. At the same time, the river's deity appeared, revealed to Wukong and Wujing that Tuolong had usurped his home and is the Western Dragon King's nephew.

Tuolong later ordered a minion to carry the inviting letter to his uncle's home. Wukong met and killed the minion, then took the letter and met the Western Dragon King. Upon learning this, the Dragon King ordered his eldest son, the Crown Prince Mo'ang (in Chinese: 摩昂太子), to bring an army and arrest Tuolong.

When Mo'ang and his army arrived to Tuolong's lair and told him to return Xuanzang and Bajie, Tuolong angrily refused and the two and their armies fought. Tuolong lost the fight, and was captured. After a brief discussion with Wukong, Mo'ang took Tuolong back to the West Sea, where the latter would receive a punishment for his crimes. Therefore, the Black River's deity also had his home back.

Much later, when Wukong met the Western Dragon King again, the latter mentioned that Tuolong is still imprisoned under the sea, and they hadn't yet decide his fate, but Wukong stated that they can decide it whatever they want. 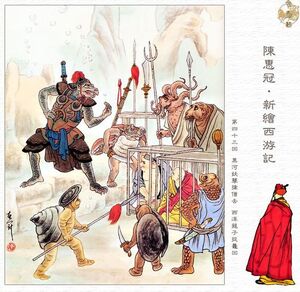 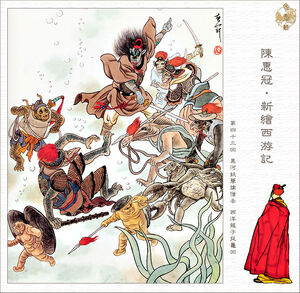 Tuolong's defeat in the novel. 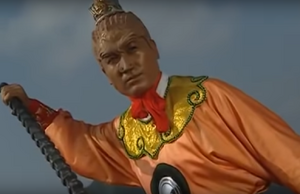 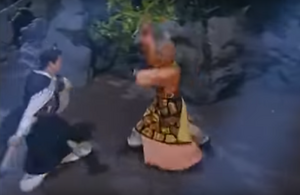 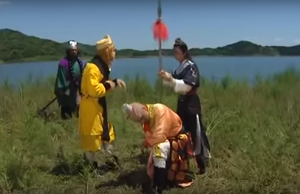 Tuolong's defeat.
Add a photo to this gallery

Retrieved from "https://villains.fandom.com/wiki/Tuolong?oldid=3540437"
Community content is available under CC-BY-SA unless otherwise noted.