Captain Underpants and the Attack of the Talking Toilets

Leader of the Talking Toilets

Eating humans and destroying everything in his path.

Send his army to eat mankind and rule the Earth.

The Turbo Toilet 2000 is the recurring antagonist in Dav Pilkey's Captain Underpants book series and also serves as a major antagonist of the 2017 film Captain Underpants: The First Epic Movie. He is a giant talking toilet created by George and Harold in the book series, and created by Melvin Sneedly and Professor Poopypants in the film. He has robotic arms and legs bent on taking over the world with an army of man-eating toilets.

The Turbo Toilet 2000 first appeared in the second novel Captain Underpants and the Attack of the Talking Toilets as the main antagonist, where he was a creation of a George and Harold's latest comic after they were put into detention for messing up the Invention Convention. The Turbo Toilet 2000 and his army of toilets come to life after the boys accidentally use one of Melvin Sneedly's inventions, the PATSY 2000 (that can turn any picture into a living object), and the toilets start to threaten the students and teachers.

Having no choice, the boys are forced to turn to their principal Mr. Krupp, who changes into Captain Underpants after one of the teachers snapped her fingers at the toilets. With the help from George and Harold, Captain Underpants managed to formulate a plan to successfully destroy the talking toilets by feeding them disgusting chipped beef, causing all the toilets to die.

Bent on revenge against Underpants and the boys for destroying his army, the Turbo Toilet 2000 returns to Earth, forcing Captain Underpants to fight him. Though Underpants manage to best out the giant toilet, the latter's tears touch Underpants, turning him back into Mr. Krupp. The Turbo Toilet 2000 then grabbed Krupp and forced him to reveal the boys' current location. On arrival, the Turbo Toilet 2000 ate Mr. Krupp and intends to do the same to George and Harold, but fortunately, three hamster pterosaur hybrids (who would later be named Dawn, Orlando, and Tony) attacked the Turbo Toilet 2000, lifted him over half a mile into the air and let him to fell to his imminent death, crashing in pieces when landing and getting destroyed once and for all.

The Turbo Toilet 2000 serves as a major antagonist of the 2017 DreamWorks animated film based on the series. This iteration is an invention of Melvin's as opposed to being a comic book character. It first appears during the school assembly, where Melvin introduces it as his latest invention. However, chaos ensues when George and Harold sabotage the Turbo Toilet 2000 by reprogramming it to shoot out toilet papers. However, Melvin knew of George and Harold's involvement, having set up a recording device, and turns over George and Harold to Mr. Krupp, who angrily puts them in separate classes for the rest of the school year as punishment for their pranks.

When Professor Poopypants becomes the new science teacher, he finds himself as the ridicule of the entire school because of his silly name but notices that Melvin's brain is incapable of having fun. Deciding to recruit Melvin to his cause, Poopypants uses his machinery to enlarge the Turbo Toilet 2000 as part of his plan to get rid of laughter due to the fact that people have made fun of his name for years.

Despite being defeated, the Turbo Toilet 2000 enacts one final act of evil- when its body is being disposed of, the clean-up crew fails to be careful and drops the toilet off in such a way that the mutating contents of its toilet bowl spill over a large collection of toilets, which turn into the Talking Toilets and (a few seconds later) proceed to ravage the town. Fortunately, Captain Underpants comes by to the rescue as he is last seen fighting off the mutated toilets (with the help from George and Harold). 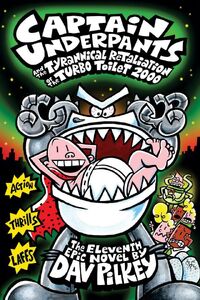