Destroy Thanksgiving (succeeded for a while).
Avenge the chieftain who summoned him (succeeded).

Turkie is the main antagonist of the 2009 American independent comedy horror film ThanksKilling and the protagonist villain of it's "third" sequel. He is a demonic turkey who seeks to kill all the people who have ever had Thanksgiving.

He was voiced by Jordan Downey.

In the 1500s, a Native American shaman named Feathercloud was dishonored by the pilgrim Chuck Langston. Outraged, Feathercloud used necromancy to create Turkie, a demonic turkey. Every five-hundred and five years, Turkie would wander the Earth, killing all white people he came into contact with.

At the first Thanksgiving in 1621, Turkie is first seen killing a topless Pilgrim with a tomahawk while saying "Nice tits, bitch!" and the girl Pilgrim dies later offscreen.

Centuries later, he was resurrected by the hermit Oscar's dog that was peeing on him. He then killed it by biting it. Turkie went back onto killing spree and there are now new weapons after his original life ended and kills a driver with a gun. Turkie then comes across the lustful Ali and her boyfriend Greg making out. He kills Greg by sliting his throat (Ali barely notices) and then he mocks Ali's lust before snapping her neck.

He was with Kirsten's parents (offscreen) and he skins the sheriff (dad) and slits the mother's throat. The teens arrive and think he is the sheriff but when they see the Turkie has fooled them he dressed up as a cartoon turkey which was eaten by one of them named Billy and he ripped through Billy's chest and says "Gobble gobble, motherf-cker, now that's what I call fowlplay". Billy's corpse was mourned by his friend Darren (one of the teens), but later he tries to kill them but gets shot and thought to be killed.

However, Turkie later gets radioactive and kills Darren by ripping out his tongue and heart, he injured Johhny but Kristen killed him by lighting him on fire and onto his tepee (which he lived in as an Indian which he was before coming as a possessed turkey) killing him. He later was revived as meat and attacks a family setting the sequel ThanksKilling 3.

Turkie is an ordinary turkey but talks and kills. He got dark magic powers from the Satanic deal and is now existing only to kill all white people.

Turkie is an evil turkey who is working with the Devil.

He loves making puns and gruesome jokes about those he murdered. He values his own safety above all others and completely despises human life. He will stop at nothing to kill everyone he meets; especially white people because the Native American chief wanted vengeance on what happened to his people so he summoned Turkie to carry out these deeds for him.

He is shown to be very self-aware, knowing full well he is in a film, as he says he smells sequels at the end and often cracks cheesy jokes. 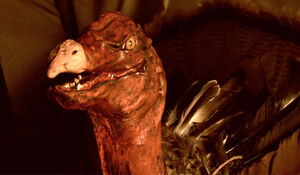 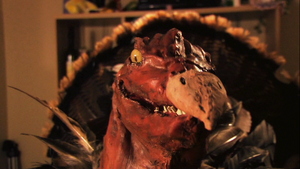 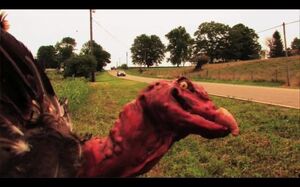 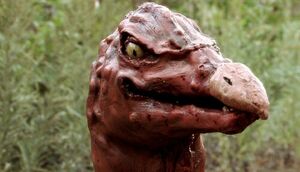 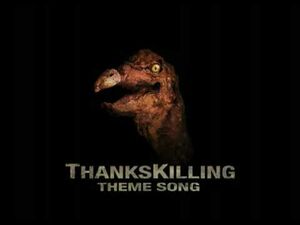 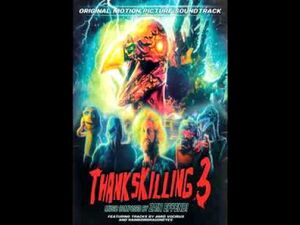