Plant the Tree of Might and consume its fruit to become the most powerful warriors in the galaxy.

The Turles Crusher Corps is a mercenary group under the command of Turles, a Low-Class Saiyan pirate who left Planet Vegeta before it was destroyed by Frieza. Their goal is to find a planet to plant the Tree of Might on, so it can grow and produce its fruit, which the Crusher Corps plans to eat so they can become the most powerful warriors in the Universe.

The team arrives on Earth and plants a seed which grows into the Tree of Might, sucking the life out of the planet. The Z Fighters try to destroy the tree, but they are unsuccessful. They are then confronted by the mercenaries Amond, Daiz, Cacao, Rasin and Lakasei while Turles watches the fight from inside his spaceship.

Gohan then arrives and rescues Chiaotzu from Rasin. Turles invites him to join his crew, but Gohan refuses and is saved by Piccolo. Turles then forces Gohan to transform into a Great Ape using a Power Ball and sends him to fight Goku. However, Goku cuts his son's tail off and restores him to normal. The Crusher Corps then attacks Goku, who kills them using the Kaio-ken technique, leaving only Turles. 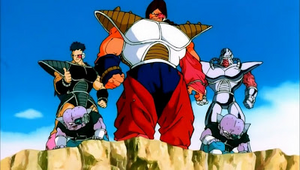