Beat up, drive away, or kill anyone who intrude on their turfs.

The Tusken Raiders, also known simply as Tuskens or alternatively sand people, are minor antagonists in the 1977 movie Star Wars: A New Hope, its 1999 prequel The Phantom Menace and the 2014 series Star Wars Rebels, major antagonists in the 2002 prequel Attack of the Clones, anti-heroes in the 2019 series The Mandalorian, and deteuragonists in The Book of Boba Fett. In their first appearance in Star Wars: A New Hope, they were referred to as the "sand people". They are nomadic bandits who live on the fringes of society on the desert planet Tatooine.

The Tusken Raiders make a brief appearance in Star Wars: The Phantom Menace, firing off shots at the podracers competing in the Boonta Eve race, causing multiple podracers to crash.

Star Wars: Attack of the Clones

In Star Wars: Attack of the Clones, a group of Tusken Raiders kidnap Shmi Skywalker for no apparent reason and torture her for weeks. Her son Anakin comes to find her, and she dies in his arms. Enraged over her death, Anakin murders the whole clan - men, women, and children - leading him down the path to the dark side.

In the Star Wars: Rebels animated series, the Tusken Raiders attack Ezra and C1-10P before getting killed by Darth Maul.

The Tusken Raiders make a brief appearance in Star Wars: A New Hope, and are referred to as "sand people". They beat up Luke Skywalker, partly disassemble the droid C-3PO, and almost kill Luke before being scared off by Obi-Wan Kenobi.

Two Tusken Raiders appear in the 2019 live-action series The Mandalorian, marking their first on-screen chronological appearance since Star Wars: A New Hope. In Season 1, Din Djarin and Toro Calican encounter two Tuskens while on their land. Djarin negotiates with them using sign language and they agree to let the pair pass in exchange for Calican's binoculars (to Calican's dismay, as they were brand-new.). In Season 2, Djarin convinces a Tusken Raider tribe to join forces with the people of Mos Pelgo to kill a krayt dragon that has affected both groups. Later, Boba Fett tracks Djarin to Tython to recover his armor, wearing the black garments of a Tusken tribe and wielding a gaderffi, a traditional Tusken melee weapon.

A unique non-raiding tribe of Tuskens wearing black garments are prominently featured in the 2021 live-action series The Book of Boba Fett. Shortly after escaping the Great Pit of Carkoon, Boba Fett is captured by this tribe. Eventually he earns their trust, learns their sign language and ways, and is initiated as one of them. However, they are eventually all slaughtered by a gang of Nikto bikers. When Boba finds them all dead, he wanders off on his own until the events of The Mandalorian. After saving Fennec Shand and recovering the Slave I with her help, Boba hunts down and kills the entire biker gang in retaliation.

Eventually it is revealed that the bikers were not the ones who killed the Tuskens. The leader of the Pyke Syndicate reveals to Cad Bane that the Pykes murdered the Tuskens so they would no longer have to pay a toll to pass through Tusken land. They then planted evidence that the bikers did it, knowing Boba would seek revenge. Because the Nikto bikers are now dead as well, the Pykes now no longer have to pay protection fees on Tatooine at all. 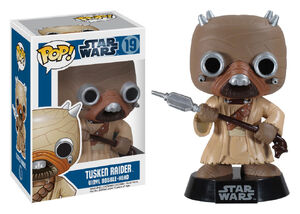 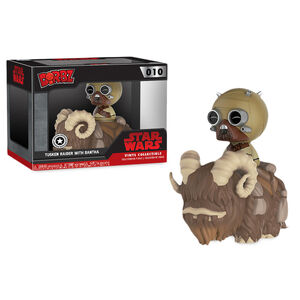 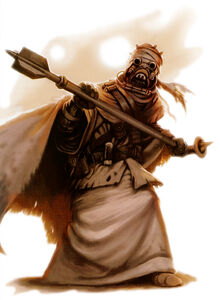 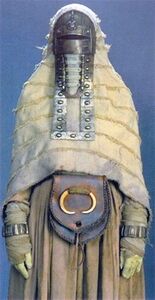 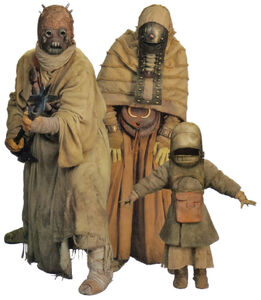 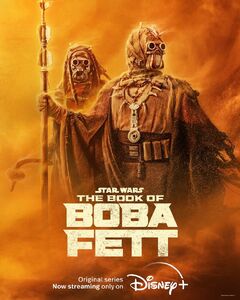