Late 700s (the year when Muzan was physically demonized)

Jūnikizuki (十二鬼月), also known as Twelve Kizuki, and literally translated as the Twelve Demon Moons, is the main antagonistic faction of Demon Slayer: Kimetsu No Yaiba manga and anime. They are a group of twelve powerful Demons under Muzan Kibutsuji's command, who have all were given a portion of his blood which have augmented their powers.

The Twelve Demon Moons are divided into two groups, the Upper Moons and the Lower Moons. Each has their number engraved into their eye, with the Lower members having it in only one, whereas Upper members have it in both. The members of the Demon Moons are fluctuated, and Muzan can replace them or even kill them once he thinks it's necessary.

The Lower Moons are the weaker tier of the Twelve Demon Moons, with the Lower Six being the weakest. Among the Lower Moons, stood the only example of being kicked out of the group by Muzan himself; Kyogai. Kyogai had already reached his "Limit" and could no longer consume human flesh. Therefore, he was gradually losing his apatite for human flesh, thereby beginning to lose the ability to evolve and become stronger. As a result, Muzan deemed Kyogai to weak to remain in his position of Lower Moon Six, so he discarded him.

Enmu, the Lower Moon One, was the only Lower Moon left. However, unlike others, Enmu showed no fear over the brink of death and even nonchalantly accepting it for pure excitement. Enmu's sadistic streak impressed Muzan, and he sent Enmu for a mission.

After Enmu's death on the Demon Train, Muzan no longer acquired new Lower Moons and started to use Upper Moon only, ending the Lower Moon's existence forever. 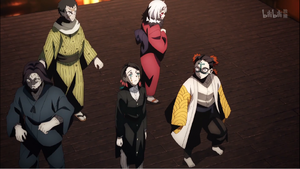 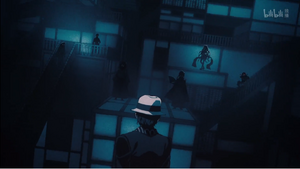 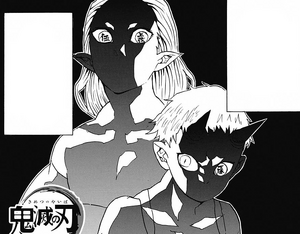 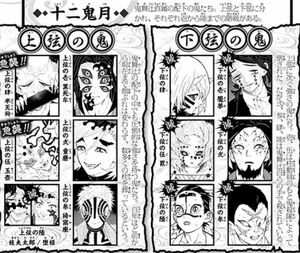 Retrieved from "https://villains.fandom.com/wiki/Twelve_Demon_Moons?oldid=4318061"
Community content is available under CC-BY-SA unless otherwise noted.