Being with Nite Owl (formerly).

Twilight Lady (real name Elizabeth "Liz" Lane) is a fictional character and villain who is mentioned in Watchmen, appears as a the main antagonist in the second part of the 2009 video game Watchmen: The End is Nigh, and also appears as a supporting character in Before Watchmen: Nite Owl.

In the 2009 video game, she was voiced by Courtenay Taylor, who also voiced Turbo K.O. and Metal K-0 in OK K.O.! Let's be Heroes, Starla Gutsmandottir in Regular Show, Ada Wong in Resident Evil: Operation Raccoon City, and Jack in the Mass Effect series.

She is a BDSM–themed criminal and "Vice–Queen" who ran illegal sex–based industries and kidnapped people as sex slaves during the 1960s, and ran afoul of the vigilantes Nite Owl and Rorschach. Nite Owl had a Catwoman–esque relationship many years ago, and she actually sent him a signed picture of herself at one point which he still has (this is how she is brought up in the original comic).

Watchmen: The End is Nigh

When Twilight Lady is fought and defeated, she is left lying on the cracked glass roof of her building at a deadly height, and Rorschach insists on killing her, due to his general brutality and particular hatred of abusers of youth, due to his traumatic previous encounters with them. This leads to a physical fight between him and Nite Owl, where the winner is whichever one you are playing as. If Rorschach wins, he shoots Twilight Lady and she falls to her death, which makes Nite Owl very upset, while if Nite Owl wins Rorschach falls but survives, and when Twilight Lady tries to flirt with Dan, but he lashes out at her and tells her to leave the city or he will kill her himself. 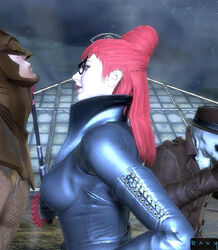 Twilight Lady in Watchmen: The End is Nigh.