Trying to destroy whatever is in their path.

Kill First Squad.
Destroy all life.
Reign as a despot.

Twin Masters is the main antagonist of the British/Taiwanese/Chinese animated cartoon series Hero: 108.

They were voiced by Scott McNeil, who also voiced The Evil Masked Figure in Scooby-Doo 2: Monsters Unleashed, The Overlord, Clouse and Nadakhan in Lego Ninjago, and Tall Boy in Riverdale. As Yang Tu he was voiced by Brad Swaile, who also voiced Light Yagami in English dubbed version of Death Note.

As revealed in the episode "Time to Go Home", one thousand years ago, Twin Masters was formerly a human prince named Yang Tu, who desired to conquer all of Hidden Kingdom. When Lin Chung was sent back in time, he encountered the young prince and fought him. In their fight, Lin Chung propels Yang Tu off of a cliff and into a volcano with a combination of his harmonic energy and chaotic energy from The sword of Zao. Unfortunately, the energy mixes with Yang Tu, transforming him into Twin Masters. After spending a millennia in the volcano, Twin Masters emerges, mastering chaotic energy, and changing their plan to destroying Hidden Kingdom and ruling as a cruel despot.

In their first appearance, they task their minion, High Roller with capturing Commander ApeTrully, and has High Roller take the Chameleon army with him. When they were defeated, Twin Masters fires a negative energy ball into a volcano, boasting that once it erupted, any survivors of the apocalyptic event would blame Big Green for it. Having learned the power of harmonic energy, Lin Chung seals the volcano. The episode then ends with Twin Masters stating their plans of destruction and vengeance on First Squad.

In "Big Baby Turtles", after the Zebra Brothers steal an amulet from the Owl Kingdom, Twin Masters infuses their chaotic powers into it, converting Big Green's turtles into giant abominations and sends them to attack First Squad. Upon being thwarted, the turtles return to their original size.

Twin Masters strikes a deal with Second Squad in "Second to None", and possesses them with their chaotic energy, tasking them with exterminating First Squad. After Lin Chung succeeds at breaking the spell over Second Squad, Alpha Girl pushes Lin Chung out of the way of a chaotic blast from Twin Masters. Thankfully, she survives.

The Flying Fish army steal Mighty Ray's eyes, giving them to Twin Masters. They then use the eyes to generate a chaotic storm which would engulf all of the Hidden Kingdom. Mighty Ray is forced to overcharge himself by eating several bananas at once, causing Twin Masters to writhe in pain. Even though Mighty Ray receives his eyes, Twin Masters proclaims that it was too late for them, because the chaotic storm they created would still destroy everything. This forces Lin Chung to enter the storm and destabilize it from within much to Twin Masters' chagrin.

Another plan of Twin Masters involves tricking the Bald Eagle King and his troops into drinking enchanted tree sap which transforms them into pterodactyls and also creates a purple substance that Twin Masters intends on using to reconvert all life in Hidden Kingdom to its prehistoric state. The spell is reversed through a use of creating a gas and transmitting it through the trees.

In "Demon Heartland", Twin Masters deceives First Squad into going to an island to destroy what was believed to be their heart. Revealing that it was actually a chaotic bomb, Twin Masters seals them in the cave along with the Hermit Crab King and Sea Elephant King, explaining that their services were no longer needed. Through quick thinking, the group escapes, and the two kings join Big Green.

ApeTrully is kidnapped again in "Animals Inside", and Twin Masters possesses him with their chaotic energy and forces them to fight against First Squad. Regaining himself thanks to Lin Chung, ApeTrully blasts Twin Masters with the chaos energy they bestowed him.

Twin Masters returns again, this time forcing a fleet of Oyster-Rahmas into nibbling away at the Trench of Lost Souls which would drain the ocean, and suck Hidden Kingdom down with it. First Squad arrives in the nick of time, and Twin Masters tries to push Lin Chung into the direction of the Trench of Lost Souls, giddily telling him to enjoy having his soul ripped from his body. The Oyster-Rahmas are freed, and Twin Masters' plan fails yet again.

When an asteroid passes by the Earth in "Collision Course", Twin Masters uses this opportunity to alter the direction of the asteroid's course, sending it to crash into Hidden Kingdom. First Squad is sent into space where they discover an alien lifeform living in the asteroid apparently becoming lost from his kind. The asteroid is destroyed, and the alien becomes an honorary member of First Squad until his people return for him.

Collecting water from the life-giving lake Thai-Gi, Twin Masters encases themselves in an energy cocoon, and sends High Roller and his troops to prevent First Squad from interfering. After gathering enough energy, Twin Masters emerges from the cocoon, becoming a horrid behemoth and they begin to drain all life of its energy. When High Roller and the other minions realize that they would also die, the Zebra Brothers and Bearstomp temporarily join Big Green to assist them in defeating Twin Masters. Learning a legend about a giant, mechanized robot entitled the Bronze Giant, Lin Chung gathers all 107 members of Big Green, forming the robot. Engaging Twin Masters in a battle, Lin Chung is told by his old mentor that all members of the robot must contribute their harmonic energy. Shocked, Twin Masters angrily yells about their invincibility, refusing to believe that they could be defeated. Twin Masters screams in horror before imploding, dying for good. 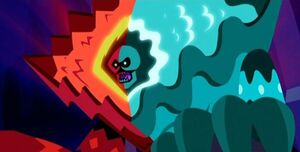 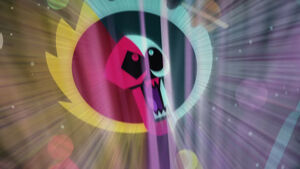