The Twins are the main antagonists of Superjail!. They are always shown to cause chaos within the confines of SuperJail, as they have loved doing so for entertainment. They are both voiced by Richard Mathar.

The Twins are two super genius trouble-making brothers. They spend most of their time ruining the Warden's plans for SuperJail which often leads out to riots, havoc, mischief, and death to some of the inmates, although they're not technically murderers. Both are very intelligent and are rumored to know everything about SuperJail that the Warden doesn't know about. They never need any help except for themselves, but have been in extreme situations in which they could not escape (when they were stuck under a boulder, were tricked into the back of a stranger's van, presumably got raped, and taken hostage). However, they were helped a couple times by some of the inmates and Alice. One talks in a lower voice while the other talks in a little high pitch voice, and whenever they appear onscreen, random techno music plays to accompany them. Because of this, they were sometimes nicknamed "The Techno Twins" by fans. Their relations to jail is unknown, but it's been hinted that they've been given "special privileges" by the Warden that none of the inmates have that gives them more freedom.

The Twins are also from another planet a year away from Earth, where everyone on their planet looks exactly like the other. It's also been mention that they are "exchange students" in the jail much to the dismay of their father, mainly because they like their lives in SuperJail more than on their planet and most likely have a bad relationship with their father.

Both brothers deeply care for each other, and their relationship often changes from brotherly affection to romantic attraction time after time. Examples are in the episode Superbar when they shared the same drink with two straws, another scene when they were in speedos, and in Negaton when they came close to flirting with each other when one asked the other one on a date. The Twins rarely smile and that they have a Mr. Spock-like calmness.

Both of the twins have always think alike, share ideas, and act as a single entity. They have both been interested in the following:

Just like the Warden and everyone in their family, the Twins have special powers. They consist of:

They also seemed to be immune to toxic/old food particles, as shown in the episode Mayhem Donor as they were examining the body parts which were dropped in. They eat regular food like everyone else, and that they can also crave "bio-chemical makeup", which consists of bleach, fertilizer, furniture polish, etc, which they seemed to be immune to. They've been shown to have glowing green blood, as shown when they were creating Combaticus.

Relations to the Other Characters

Warden: It's been shown that they don't even like the Warden, as they always ruin whatever Warden was planning to do. However, in Ladie's Night, they unexpectedly help the Warden win the bet against the Mistress when they got the Spanish Flies to make the women go on a rampage.

Jared: Little is known about the Twins' relationship with Jared and have very little interactions, but they don't seem to acknowledge him while Jared seems tolerable to them (despite what happened in the Pilot). In one episode, the Twins managed to manipulate him into drinking the growth serum they stole earlier, but with different effects that causes Jared to transform into a Hulk-like state. However, in the season one finale, Jared, along with JailBot, seemed to be shocked about what happened to them. In one episode of Season 2, he decided to help The Twins escape from Hunter.

JailBot: Just like Jared, they don't acknowledge him very much, but one episode, they used him as a pawn in a plan to overthrow one of the Warden's plans yet again. However, in the season one finale, JailBot, along with Jared, seemed to be shocked about what happened to them. He was shown helping The Twins escape from Hunter, though it seems as if he was helping Alice and Jared to help The Twins escape. However, it was later shown that they like JailBot in Season 4 when they gave him a "companion" (which would later cause havoc in SuperJail), due to them believing that "two is better than being alone".

Alice: They seemed to be in good terms with Alice, and she doesn't even deal with them much like the Warden and seems to enjoy their company, but often refers The Twins as geeks, and often mistakes them as girls. In one episode of Season 2, Alice decided to help The Twins escape from Hunter, but mainly because she believes that Hunter wanted her boyfriend, which consists of one of the inmates. Alice also helps out one of the Twins' budding and helped giving birth to the Wurbuxx, even wanting to be the Godmother. The Twins also seem to trust her, as they accepted her help in both of these episodes. They also healed and somewhat revived her back to life at one point.

Combaticus: The "son" of the Twins in order to irk up the Warden and his Fight City Tournament. At first, they treated him like a weapon, but later on, they were mourning for his death in sadness since he sacrifice himself to save the Twins and was crushed by a giant rock. He wasn't seen again until Time Police - Part 2 where he rescued the Twins from the Warden's robots, who both cry with joy and hugged him in an almost parental sort of way.

Hunter: A female human-shaped naked creature created by Ozal. When the Twins were lying to the inmates about their pasts, they told them that she helped their father cause the genocide to their race. When in reality, she is actually the family dog who was sent to bring them back home. Hunter seemed to have a deep hatred for the Twins, as they also seemed to fear her for a short time before they trapped her in the Crystal of Ozal.

Ozzal: An alien-like father of the Twins. When the Twins were lying to the inmates about their pasts, they told them that their father, along with Hunter, destroyed their home planet. When in reality, he was the ruler of their home planet and disliked his sons for living in SuperJail, even sending Hunter to try to bring them home.

Wurbuxx: The Wurbuxx is an human-like embryo and the infant of the Twins. It was later revealed to be "food" as part of the Twins' race, as they devour it.

The Triplets: The three older brothers of the Twins. Their relationship with them seems to be a typical older-young sibling relationships. They were also jealous when the Twins were declared the next overlords of their home world. 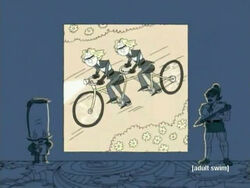 The Twins during Jared's presentation in the Pilot.

The Twins in speedos during their cameo in Superbar.

The Twins upon finishing creating Combaticus

The Twins with Combaticus shortly after entering Fight City.

The Twins showing off their strength during their mischief in Ladies' Night.

The Twins at the end of Terrorarium.

The Twins using the Dream Machine.

The Twins after their comeuppance in Time Police Part 2.

The Twins' files on Jared's computer in Hot Chick.
Add a photo to this gallery
Retrieved from "https://villains.fandom.com/wiki/Twins_(Superjail!)?oldid=3422781"
Community content is available under CC-BY-SA unless otherwise noted.