Twisty is a retired clown who is a serial killer and kidnapper. He wears a mask at the bottom of his face hiding his terrifying nature. Twisty has strange facial features, his face being parts of a mask and then scars on different sides. He is always wearing a dirty and muggy clown suit, and usually is carrying around a sack that holds his juggling pins.

At first, Twisty exhibits no remorse, and seems like a bloodthirsty killer, murdering people for no reason at all. However, later it is learned that Twisty was delusional, so he was not aware of the atrocities that he was committing.

He was portrayed by John Carroll Lynch, who also played Sheriff Bob Ryan in Gothika, Arthur Leigh Allen in Zodiac, and Mr. Jingles in a later AHS season, 1984.

Twisty's appearance undergoes a very drastic change during the course of the series. Initially, he was a classic Pierrot clown, with a full whiteface, with a big red nose, a white, baggy costume with red bits and 3 red pom-poms on the front, red lines running across his eyes, and a big red clown smile painted on his face. He was a bright and colorful clown who looked very sweet, huggable, and approachable. After his attempted suicide, he lost most of his lower jaw, and wore a marginally less terrifying prosthetic grinning mask across the damaged area of his face.

Later, he replaced his Pierrot clown hat with what appears to be the severed scalp of another, unknown clown. The predominantly bald scalp had a yellow tuft of hair on the left, a large dark green tuft on the middle, and a red tuft on the right. The middle red pom pom was replaced with a yellow one, and Twisty ditched his big red clown nose. As time progressed, his costume became grey and degraded, and his paint appears to have been left on for months. At this point, the initially bright and cheerful clown's appearance had become so warped, it could instill suspicion in adults, and uncontrollable fear in children.

Strangely enough, Dandy Mott's mother still assumed he did private children's parties, and hired him to entertain Dandy, despite his grotesque appearance. This may have been done to scare dandy, as a passive-aggressive act of revenge on her part, yet Dandy was totally unafraid of him due to his own emotional instability.

Twisty's background is a major topic explored in "Edward Mordrake: Part 2". As a baby, his mother dropped him on his head. Twisty was a very popular children's clown in 1943. Two midgets who work along side Twisty, were jealous of Twisty and told him that the children were telling the cops that he was molesting them. Confused, Twisty runs away and is unable to find work anywhere. He returns to Jupiter Fl, and tries to sell toys to children, but is met with fear and disgust. So he decides to kill himself by shooting himself with a shotgun. He fails at that and only disfigures himself. He then decides to make the children love him again and keep them "safe" from their parents.

Twisty's first known captive was Bonnie Lipton, a girl local to Jupiter, Florida. He came upon her while she was having a picnic with her boyfriend. His entertainment of them both turned to terror when Twisty knocked the boy and girl unconscious with juggling pins. Later, she awoke to find Twisty had fatally stabbed her boyfriend. She tried to flee, but Twisty took her captive.

Lipton and Bachman are held captive in an improvised cage in the back of an abandoned bus. Twisty proceeds to try and entertain them, but they only gave him looks of horror. He tried from a different angle and blew up a balloon and tried to make a balloon animal. But he rushed it and ended up popping the animal, distressing the two captives and causing Twisty to become enraged. He threw jars on the floor and banged on their cages, and pulled the bunting and the streamers down.

Twisty also decapitated a toy store owner and his clerk, lurking in plain sight to capture the latter. He carried the young clerk's head with him in a sack.

Gloria Mott encountered a walking Twisty roadside. She pulled alongside, asking if he does private parties for children. She offered to pay him handsomely to cheer her son, Dandy. Dandy tried to entertain Twisty with a marionette show. Twisty was not amused, though Dandy wanted Twisty to take a turn amusing him. Dandy more closely observes Twisty, but said that the clown will have to earn his keep to stay. After a knock to Dandy's head, Twisty ran off.

Later, Bonnie and Corey were trying to escape when Twisty entered the bus (unknowingly followed by Dandy) and sat opposite them before offering the toy that he took from Dandy's house. When the toy stopped moving, Twisty got up and Bonnie hit him with a nailed board, ripping off his mask and revealing his disfigured mouth, allowing them to escape. However, Corey was recovered by Twisty and Bonnie was caught and taken back to the bus by Dandy, who wanted to see them tortured 'for fun'.

During Halloween, Twisty stalks a young girl and followers her to her home, where he kidnaps her brother.

A short while later, Twisty is attacked once again by Bonnie and he captures her as she tries to escape once again. Jimmy Darling and Maggie Esmerelda see this from a distance, and follow him to try and help Bonnie, but end up being knocked out by Dandy. Dandy then tries to put on a show for the captured victims by attempting to saw Maggie in half, with Twisty clueless and cheering from the sidelines. Jimmy escapes captivity and punches Dandy. Twisty cheers, thinking it is a part of the show, but Jimmy punches out Twisty afterwards. Jimmy is captured by Twisty, and as Twisty is about to kill Jimmy, Edward Mordrake arrives, and demands Twisty's tale.

Twisty eventually takes his mask off, once again revealing his disfigured face, and tells Edward his story about how he was a children's entertainer, who was confused and tricked by his jealous coworkers into making him run away. Afterward, Twisty had tried to sell recycled toys, but is denied out of fear and disgust. Twisty had then attempted suicide with a shotgun, but instead disfigures his lower jaw. He tried to entertain customers at the Freak Show, but is once again denied. Twisty then attempted to "save" kids from their parents, and got them a "pretty babysitter" (Bonnie) showing that he did not know that he was not aware that he had done wrong when he had kidnapped and committed the murders.

Edward claims that "The Demon" wept for his tale, and that his story was unique. He invites him to join him and the other souls he had collected, Twisty then stands up and is stabbed to death by Edward and his collected souls. Twisty's spirit then gets up, no longer disfigured, and joins Edward's group. Jimmy, having viewed the whole event, was credited for killing Twisty.

Twisty does not appear again until the season finale ("Curtain Call") where he appears alongside Edward Mordrake when they visit Elsa (who was performing on Halloween, a ritual the freaks normally avoid in order to prevent summoning Mordrake).

Prior to becoming a psychotic killer, Twisty worked at the rusty Westchester circus as a Pierrot clown (A type of clown who wears mostly white clothing and relies more on slapstick comedy and magic tricks than telling jokes) and was fantastic at his job, as in his own words, he was a "special children's clown", and children indeed used to love him and would gather in large crowds to enjoy his antics and cuddle him. He was a simple man, and had a very black-and-white view of the world, and could believe lies easily. He absolutely loved children, and was thoroughly dedicated to making them laugh, as a matter of fact, it was his only purpose in life, and he was literally incapable of any other kind of work. Due to brain damage from a concussion during infancy, and the possibility his mother was drinking while carrying him, Twisty had moderate learning disabilities, and was rather childish and immature himself, often throwing tantrums whenever he couldn't get his way, but also being understanding of and warm towards children.

Even after being falsely accused of being a pedophile, which cost him his job, Twisty's love of children inspired him to make toys for a local toy shop to sell. Unfortunately, his tainted reputation spread to the toy shop, and he was ostracized by the entire community. Due to the dwarfs at the freak show spreading the accusation, Twisty hates freaks. He also hates smoking, as it makes his throat burn. After his attempted suicide, Twisty's simple and child-like mind degraded into a delusional maniac, with a very lose grasp on reality. It may be due to brain damage from loss of blood and even lead poisoning from the bullets. Either way, twisty was willing to murder, kidnap, and try to brainwash children into loving him again. He was still simple, but retained an animalistic cunning, and was very good at evading the authorities and abducting people, all the while remaining undetected.  He also held onto the opinion he was merely a good clown, and totally oblivious to the atrocities he caused, suggesting that he is completely insane. Twisty also was a good craftsman, making cages, and whirligigs. 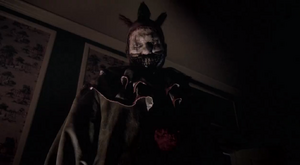 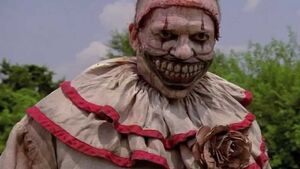 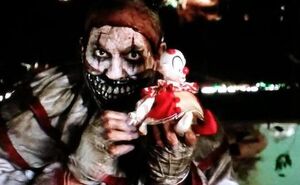 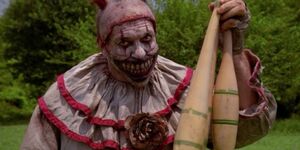 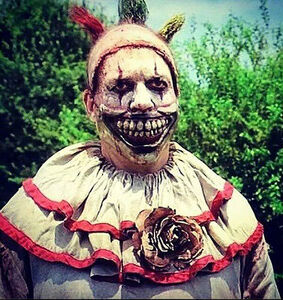 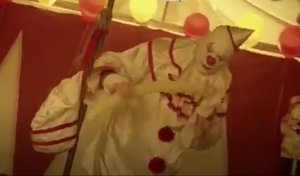 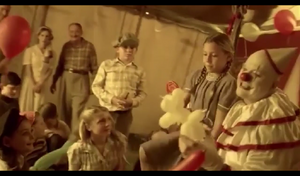 Back when Twisty actually WAS a good clown. 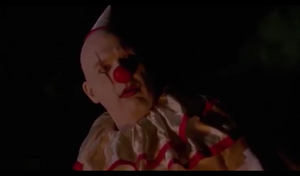 Shocked Twisty, upon being incorrectly accused of sexually abusing children and the very moment his clowning career was flushed down the toilet.