Twitch is a supporting antagonist in Pixar's 11th full-length animated feature film Toy Story 3. He is a male warrior insect and one of Lots-o'-Huggin' Bear's henchmen. He talks by using his mandibles and bears a resemblance to a moth.

He was voiced by the late John Cygan, who also played Hedley in Disney's Treasure Planet, Solidus Snake in Metal Gear Solid 2: Sons of Liberty, and the Mugger in The Cleveland Show.

Twitch is seen with the other toys from Sunnyside Daycare in the Butterfly Room when the toys have their first donation. Mrs. Potato Head meets him and feels his biceps after helping her when she had fallen, much to Mr. Potato Head's jealousy. Later that night, Twitch and the other of Lotso's workers enter a vending machine in Sunnyside Daycare playing poker using a See & Say toy.

When Sunnyside is restored, Twitch is waiting to be played at in the shelf by a toddler. He handles Chunk who is tossed by one of the toddlers.

Note: This description is taken from the original Toy Story 3 website. Do not modify it.

"Meet Twitch the insectaloid warrior, where MAN + INSECT = AWESOME! This sturdy action figure stands over five inches tall, with more than 15 points of articulation, including ferocious chomping mandibles. Use his powerful wings and impenetrable exoskeleton to evade capture! Twitch is meticulously detailed and includes his signature magical battle staff and removable chest armor. For children ages 4 and up. Other insectaloid figures sold separately." 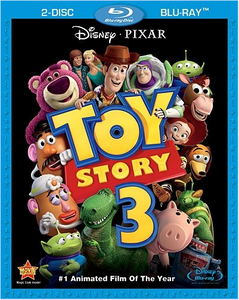 Twitch, Lotso, Sparks and Ken on the cover of Toy Story 3's Blu-ray.

Twitch and his friends watching a movie with other Pixar characters. 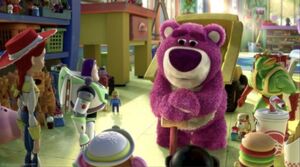