Demolition experts and pilots of the Ammonian Army

Expertise in firearms and explosives

Mastery of cannons
Expertise in piloting planes and Mechs

During Shantae's search for the first Den of Evil on Saliva Island, she meets Twitch and Vinegar, who are on vacation. However, they are both disappointed with their trip due to there not being a pool on the island and instead set up a picnic (which is actually just a giant ham). Using the ham's tempting smell, Shantae opens the mouth of a Giant Lummox, causing it to drool, creating a pool for Twitch and Vinegar. Following this, they help Shantae out by giving her a Petrify Spell, which she later uses to find the Den of Evil.

Much later into the game, Shantae encounters the two again, finding them seemingly praising the hero Bran-Son, while being not so fond of his alter ego Brandon. Shantae subsequently finds and returns Brandon's Enchanted Blade, allowing him to turn into Bran-Son and give a speech about who he is and how others should stay true to themselves, leading Twitch and Vinegar into stating that they were actually planning to sell the information they learned about Brandon's secret identity to his enemy the Grim Reaper's Ghost. They then decide to go back to work—Shantae realizing that they are Ammo Baron's minions.

After they and Barracuda Joe return to their posts and Shantae gives Ammo Baron his Targeting Module (without knowing it's purpose), they take place in his attempt to destroy Sequin Land Palace and kill it's inhabitants with his new giant canon; Vinegar managing the canon's targeting system and Twitch readying to firing it. However, due to the Targeting Module's being designed by Shantae's dimwitted friend Bolo, it misfires horribly, with the shot meant for the Palace landing on Frostbite Island, blowing open a hole leading to the final Den of Evil and hitting Techno Baron. When the shot is fired, Vinegar informs him that the wrong target was destroyed and, when Ammo Baron asks somebody to find Techno Baron so he can make a new Module, Twitch states that she's not going to tell him about what happened.

During the final boss fight (which ironically takes place on top of Sequin Land Palace), Risky Boots manages to convince Twitch and Vinegar to use Ammo Baron's cannon to shoot down and kill Pirate Master after the undead captain reaches his final form.

In Half Genie Hero, after Shantae defeats Holly Lingerbean and Wilbur in Tassel Town, Twitch and Vinegar reappear in Scuttle Town. When talked to, the two women state that they desire to eat Gator Steaks and will give Shantae a reward if she brings them some. Once Shantae does so, they give Shantae a ticket to the Carpet Races.

After Shantae arrives at the races, having been told by a pit-man that there was going to be a carpet heist that could endanger the lives of both the contestants and viewers, she finds that Twitch and Vinegar had been stealing the Magic Carpets for the Ammonian Army. Vinegar orders Shantae to give up her carpet, but she refuses, leading to Twitch and Vinegar having to fight Shantae in the game's 4th boss.

Twitch and Vinegar are last seen carrying the Ammo Baron of screen with a stretcher after he and his soldiers are defeated by Shantae.

Both Twitch and Vinegar have blond hair, blue eyes and overall very similar appearances, to the point where they both look almost identical, although Vinegar is slightly taller. In their Ammonian Army outfits, Twitch and Vinegar both wear the same shade of blue in their clothing, but overall dress much differently. Vinegar distinctively wears orange, two thick brown gloves and (for some strange reason) pink face paint. Twitch distinctively wears an over-sized Ammonian helmet (which, just like Ammo Baron's, vaguely resembles a Tanooki) and always wears her goggles while in her outfit. Twitch also notably carries a bomb whenever she is working and has a rather large handgun belted to her leg. 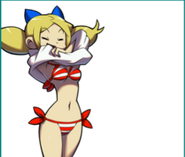 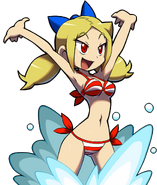 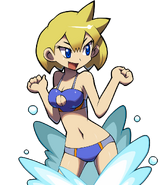 Retrieved from "https://villains.fandom.com/wiki/Twitch_and_Vinegar?oldid=3892515"
Community content is available under CC-BY-SA unless otherwise noted.