Providing for his family

Two-Bits is a anti-villain turned anti-hero and protagonist in the 2018 CW series Black Lightning.

He was portrayed by Jason Louder.

Two-Bits grew up together with Jefferson Pierce, although he was a little younger. Two-Bits eventually joined the 100 Gang.

Two-Bits eventually start selling the new drug Green Light in Freeland. Since the drug is incredibly addictive, Two-Bits offers the first dose for free in order to create a market. The main target of Two-Bits is older students and young adults. The drug causes great damage in Freeland, causing 36 overdoses - six of them fatal.

After the Green Light drug has hit the streets of Freeland, Pierce - as Black Lightning - interrogates one of the dealers. From the dealer, he learns that Two-Bits is responsible for the drug and starts to plot against the dealer. Aware of their past connection, Pierce heads to a bar as a civilian, knowing that Two-Bits will be there.

Indeed, Two-Bits recognizes him and jovially welcomes him. However, in private conversation Two-Bits reveals that he knows that Jefferson has come for him. He asks Pierce what he wants and Pierce reveals that one of his students overdosed on Green Light. Claiming that Two-Bits' name came up.

Pierce acts as if he wants to give the dealer a heads-up before the police arrive. Two-Bits is grateful but refuses Pierce's demand of leaving the business, claiming that he has a family to take care of. Pierce realizes that he cannot press the matter further without being suspicious, Two-Bits and Pierce part ways and Two-Bits head back to his gang.

To get answers anyway, Pierce returns to the bar as Black Lightning. Most of the Two-Bits' henchmen flee and the few who fight are swiftly defeated. Two-Bits tries to run as well but Black Lightning holds him back. Two-Bits asks for mercy because he knows that Black Lightning will knock him out and leave him for the cops, which would be his third strike and cost him thirty years in prison.

Black Lightning agrees to spare Two-Bits if he reveals where he drops off the money from his drug sales and stops selling drugs altogether. Two-Bits accepts the deal and reveals the location. Knowing that Black Lightning will knock him out, Two-Bits asks for a selfie first but is knocked out by the confused Black Lightning before he can take the picture. Black Lightning leaves the unconscious gangster in the bar but, as promised, does not call the police.

While out in the city late at night, Two-Bits witnesses a young girl display some sort of power. Immediately afterward, a van appears and soldiers exit and kidnap the girl. Shocked, Two-Bits is only able to scream after the van as it drives off. The next day, Two-Bits visits Jefferson Pierce at Pierce's home and reveals to him what he saw. After he is done, Pierce tells him to explain what exactly he saw and to leave nothing out.

As Black Lightning, Pierce later meets with Two-Bits again and asks him about the Green Light distribution in Freeland. During the conversation, Pierce stops Two-Bits from smoking a joint and although Two-Bits meekly objects, he realizes that Pierce is helping him become a better man. 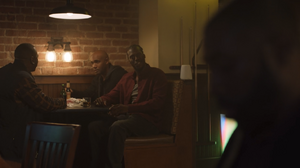 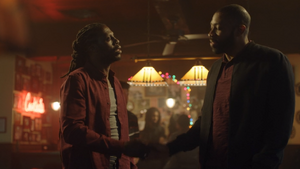 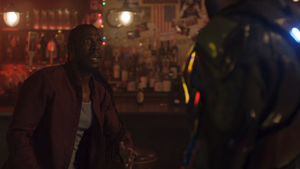 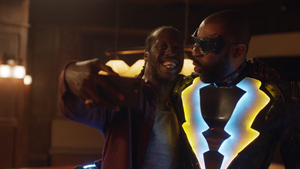