Assist Two-Face in his criminal activities

In Arkkham City they are in a war with Joker's Gang and Penguin's Gang over ruling Arkham City. Eventually Two-Face's Gang wins because Joker dies and Penguin gets captured. However, their victory is short lived, as Catwoman defeats Two-Face, and the rest of the gang was arrested by the GCPD.

In Arkham Knight they are trying to rob the banks in Gotham, but are thwarted by Batman.

Two-Face formed his team of inmates to take over Arkham City and eliminate his enemies. Setting his sights on the Solomon Wayne Courthouse in Park Row, Two-Face ousted Calendar Man and made the Courthouse his lair.

Two-Face then caught Catwoman stealing from his personal vault, captured her, and took her to the Courthouse for public execution to show an example that they "meant business." Batman intervened, suspended Two-Face over a vat of acid, and saved Catwoman. Reportedly, Two-Face went underground, his gang scattered, and were captured by Joker's Henchmen who tormented and tortured them. Batman witnesses this first hand when he goes to the steel mill for the second time, two members of Joker's gang are about to lower a member of Two Face's gang into something extremely hot. When Batman takes the two Joker men out, he can help get the Two Face member down, after a few moments of recovery, he then attempts to attack Batman, but is swiftly put down.

Eventually, Two-Face's Gang stormed the Bowery and conquered Penguin's territory as well as the Museum. When Two-Face returned after the death of the Joker, he was defeated by Catwoman and left unconscious in the Museum Armory. It was assumed that Two-Face's Gang was taken into custody when the GCPD stormed the mega prison.

One year after Arkham City, Two-Face's Gang teamed up with Penguin's Gang and Harley Quinn's Gang under Scarecrow's Army. During mission Two-Faced Bandit, Two-Face's Gang tried to rob the banks in Gotham City by using garbage trucks to store cash in disguise. In the first wave, Batman defeated a certain number of henchmen before they stole a certain number of cash. An alarm went off and covered any attacks that made sound and drew attention to others. In the second wave, the remaining thugs abandoned the robbery and tried to kill Batman and there was no alarm at that point. In the final wave, after taking out the thugs, Two-Face with a group of Militia soldiers came in to search for Batman. Nevertheless, Batman managed to take out the militia and took Two-Face to GCPD custody.

A Flip Of A Coin

In the aftermath of Knightfall Protocol, Two-Face broke out of GCPD and escaped to Hell's Gate Waste Disposal Facility, where he used as his money laundering business, Robin took down all of his henchmen and defeated him once again. 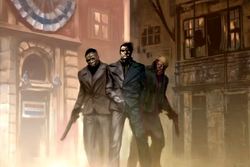 Two-face with his crew