Causing chaos and making a choice by flipping his coin

Kill Catwoman and Batman for ruining his face (failed)

He is voiced by Troy Baker, who coincidentally voices the Arkham Knight and the Joker (in Arkham Origins only) in the same series, and also voiced Joel Miller in The Last of Us series, Pagan Min in Far Cry 4, Higgs in Death Stranding, Delsin Rowe in inFamous: Second Son, and many others.

Before the events on Christmas Eve, Harvey Dent was presumed to be running for D.A. in Gotham City. He most likely won the elections on the day on Christmas Eve. In the GCPD (Gotham City Police Department) building, there is a newspaper which states that Harvey has been elected D.A. of Gotham City, however, it is unlikely he has yet been established as Gotham's "White Knight" at this stage.

In his base, Enigma had been investigating Batman's true identity and has listed that Harvey (as well as Bruce Wayne) are possible suspects for being Batman.

After Joker was defeated and Arkham Asylum was finally restored by the GCPD, Batman receives a message saying that Two-Face is robbing the Bank. Batman travels to Gotham City via Batwing and heads to the Bank in order to stop him, his cell is in the Penitentiary.

After taking down some thugs in Gotham City, Batman discovers that various criminals and villains have escaped from Arkham Asylum. Quincy Sharp then states that it's the last straw and Arkham City will be built in order to ensure the imprisonment of the criminals.

In the streets of Gotham, Batman defeats some of Two-Face's henchmen and then finally confronts Two-Face. Before attempting murder upon the masked vigilante, he flipped his coin and then pulled out two machine guns to fight Batman. Batman throws a Batarang at him, disarming Dent of his weapons.

Eventually, Batman finally came face to face with Two-Face and fought in hand-to-hand combat. Batman manages to successfully defeat him and have him captured, on the newspaper it shows Batman holding Two-Face by his neck.

If the Catwoman pack is downloaded, Two-Face captures Catwoman at gunpoint before she could steal from him in the courthouse. In the main story, Batman hears from an intercepted radio signal from a TYGER guard that Two-Face has Catwoman held captive in the Solomon Wayne Courthouse. Batman fought Two-Face's henchmen to get in the courthouse. He sees Two-Face starting a kangaroo trial with Catwoman suspended above a vat of acid. Before starting the trial, he flips his coin in the air, landing on its good side. Batman takes out the gunman at the top before fighting his henchmen on the floor. After he defeats them, Two-Face shot Batman through the panel and tries to kill Catwoman. He flips his coin again, this time landing on the bad side. Before he could kill her, Catwoman breaks free, scratches the scarred half of his face, and knocks his gun away from him. Catwoman says "No gun Harv?" and Two-Face reveals another gun and replies "Two guns bitch!", and then Batman uses his grappling hook to suspend him atop the vat of acid. If Batman talks to him, Two-Face vows that he will be back.

After Batman escapes the subway after leaving Wonder City, if he goes inside the museum, he will see Two-Face's henchmen taunting Penguin, hinting that he will take over his base of operations. In Catwoman's DLC pack, after the main story ends, she heads to her apartment to retrieve the stuff she has stolen from Hugo Strange, only to trigger a bomb set by Two-Face. She survives and attacks the henchmen checking up on her if she was dead. One of the henchmen revealed that Two-Face is in the museum. She heads there and fights off his henchmen. Catwoman enters the room that Two-Face is in, feeling confident that his gang will take over Arkham and Gotham after taking over Penguin's base and hearing about Joker's death. If a henchmen sees an unconscious body or if Two-Face sees Catwoman, he will go ballistic, walk to different places and shoot a bazooka-type firearm all over the place. After Catwoman has taken out enough henchmen and takes down Two-Face, she threatens to scratch him again unless he gives her stuff back. Two-Face replies that he only kept half and gave the rest away to a select henchmen. Catwoman knocks him out and hunts down the henchmen to get the rest of her stuff back.

In Batman: Arkham Knight, there is a side mission where Batman has to stop Two-Face from robbing multiple banks in Gotham. After Batman stops Two-Face's thugs from robbing a couple banks, Two-Face will come in the final bank and face Batman. After Batman defeats Two-Face and a couple of his thugs, Batman will take him to the GCPD to be locked up with the other villains that Batman has defeated. When his henchman tells Batman to hands off their boss, Two-Face tells his gang to save their breaths when they'll get their chance before Batman assumed "Not anytime soon."

However, whilst his men ware captured in Gotham, Two-face had also sent men to Blüdhaven to empty the banks there. As Nightwing was busy in Gotham helping Batman, Two-Face's men in Blüdhaven were unopposed and were able to steal loads of money. Additionally, Two-Face has broken out of jail. After the Knightfall Protocol, Tim Drake infiltrates the Hell's Gate Waste Disposal Facility which Two-Face uses to launder his money. After defeating Two-Face's men, Robin faces Two-Face himself, who overpowers the young hero by shooting him in the foot. As Robin lies on the ground, Two-Face prepares to finish him off but is distracted when Barbara overrides the loudspeakers in the room, giving Robin the opportunity to lunge at Two-Face and knock him out.

Thought to be the "White Knight" of Gotham, Harvey Dent was once selfless, moral and extremely dedicated to cleansing crime in his city. His dedication to justice and unwavering sense of right and wrong was almost unfound in politicians and officials by Gotham City standards, most of which were flooded with corruption. Because of this many people actually believed he was the Batman during the beginning of the vigilante's career. His fall from grace after being horrendously scarred by acid thanks to Carmine Falcone, resulting in the loss of half his face and fracturing his psyche, which proved to not only be a blow for Gordon and Batman, but for all of Gotham.

Dent became more twisted and psychotic every year after his accident, as well he even became less sympathetic and redeemable in the eyes of Batman, who used to be his close friend, however, he did show pity on him while taking him to GCPD in Arkham Knight, as Aaron Cash even states that he "felt bad about booking him" in the evidence lock-up. Dent's dependency on his two-sided coin leaves him with scarce loyalties, should it come up bad for someone he would kill them without so much as a second hesitation. However, he is capable of making decisions by himself but normally under pressure or in a forced situation. He is much more reliant on the prospects of fate and destiny rather than calculated decisions, perhaps a reason of him losing the Arkham City gang war, he would much prefer to follow the coin blindly even if the decision was a poor one instead of genuine strategy. However, his unpredictability is also considered a gift, as it leaves him hard to place in the eyes of his enemies.

Dent is also not without his inner battles, at times, the Harvey and Two-Face personas conflict each other, which is best shown in the courtroom when discussing the fate of Catwoman, Harvey attempted to give her a fair trial as they were in a "place of justice" whereas Two-Face argued to kill her as to gain fear in Arkham City. His own self-opinion after his accident varies between games. During the Interview Tapes with Strange, he is given the opportunity to either be cured or set free into Arkham City and he chooses to remain the same, either showing he is comfortable with himself or he was pressured to make a decision. However, in Arkham Knight, he admits to Batman while being taken to the GCPD that "[he] wished [he] was dead" revealing a self-loathing aspect of his personality.

Despite it being years since his transformation, Two-Face has mostly absolved his personality, as he still shows traits of the man he used to be. Dent showed incredible determination, as displayed when after his face was scarred by acid he still fought Falcone in court. He also possesses some degree of compassion, and considered giving Catwoman a fair trial at the courthouse but quickly decided against this. Because of his former job of that as a District Attorney, he has a sense of justice which has become horribly warped and during her trial he uses multiple layman' terms, that of a judge would do. He even once contemplated cutting off her hands, perhaps as an ironic punishment.

His obsession with duality has become the insignia of his criminal empire, and to match his own scars, he makes his men wear outfits similar to his appearance. This is also shown by the way he carries two guns, halved Catwoman's stolen loot and manner of killing, and cutting one of his men in two with a saw. Despite this cruelty, all of his men have unwavering respect and loyalty, if not fear, for Dent.

Two-Face has a rivalry with his fellow crime lord, Penguin. Despite working together with Scarecrow, they still had a dislike for each other. When Oswald told him getting him involved was a big mistake, Dent told him to watch his mouth as they are on the same side of the bars now. 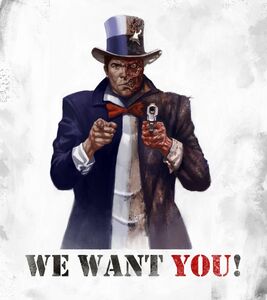 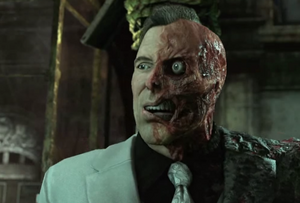 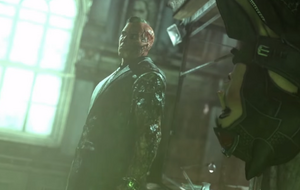 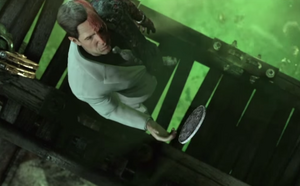 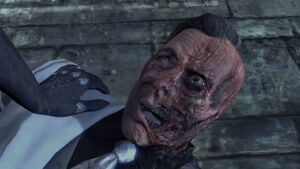 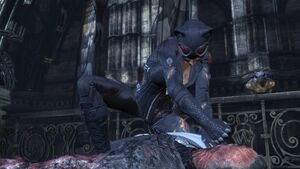 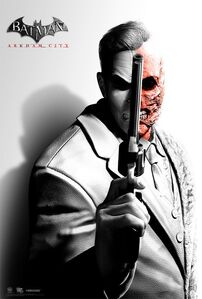 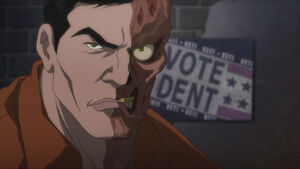 Two-Face in Batman: Assault on Arkham. 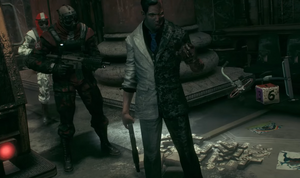 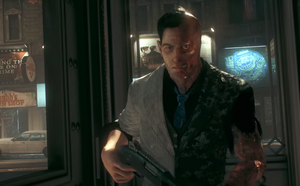 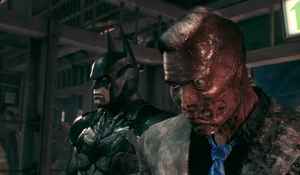 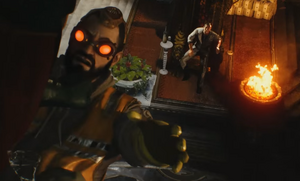 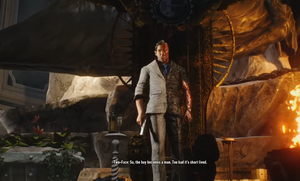 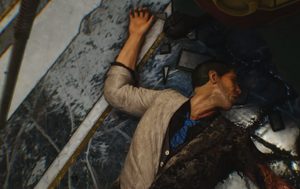 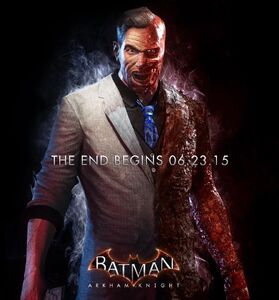 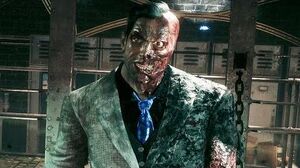