Capture Batman and Robin and bid their identities to Gotham's criminals.

Kill Batman and Robin.
Release the evil gas onto Gotham City to turn everyone into a criminal (all failed).

Harvey Dent, also known as Two-Face is the main antagonist of the 2017 film, Batman vs. Two-Face. He was once Gotham's finest district attorney until a science experiment to remove the criminal element caused half his body to mutate with pure evil, turning him into Gotham's newest supervillain and Batman's arch-enemy.

He was voiced by William Shatner, who also played Evil Kirk in Star Trek.

Harvey Dent began as a normal looking man with orange hair and brown suit. After becoming Two-Face, the left side of his body became horribly disfigured with green skin, black messy hair, yellow eyes, and a purple suit. When his evil side completely took over, both sides resembled the evil side.

Harvey Dent was a man of great virtue who saw to it that every criminal was put behind bars for their misdeeds, and was a good friend to both Bruce Wayne and Batman, but did occasionally treat Dick Grayson/Robin as a child. After the accident, Harvey's darker half began to slowly take control of him, forcing him to become Two-Face, a ruthless crime lord who's desire is to destroy Batman and Robin and reign supreme over Gotham. However, the two sides had to share control, using a two-sided coin to decide their next action. His crimes always have a theme of duality to them.

After Harvey's face was "restored", he welcomed back the opportunity to rebuild himself as a member of society, but was plagued with guilt over having to work with Two-Face to do so. In the climax of the film, Two-Face was able to completely take control of Harvey's body, but Batman was able to help Harvey fight back against Two-Face and take back full-control, seemingly ending the villain once and for all.

Harvey Dent was the district at tourney of Gotham City. One night he attends the experimenting of Dr Hugo Strange’s evil extractor. But the villains laugh evilly which overloads the machine and causes it to explode. Batman tried to save Harvey but the evil touches half his face causing him to take on a new evil identity: Two-Face. After several fights, Harvey is deemed cured and whole.

However Two-Face still kicks around and organizes duality based crimes. All the signs point to him. 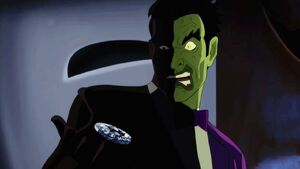 Retrieved from "https://villains.fandom.com/wiki/Two-Face_(Batman_vs_Two-Face)?oldid=3947231"
Community content is available under CC-BY-SA unless otherwise noted.