Bringing criminals to justice.
Flipping his coin to cause fates of criminals.
Making his own luck.

Work with Batman and Gordon to make Gotham safe by arresting the mob and dismantling their organisation (mostly succeeded).
Arrest The Joker (succeeded).
Two-Face:
Get revenge on everyone responsible for Rachel Dawes's death (succeeded).
Exact vengeance on Gordon by murdering his family and Batman (failed).

Upon being elected as Gotham City's district attorney, the idealistic Dent dedicated himself to ridding the city of organized crime. His crusade against crime ultimately led to him crossing a criminal mastermind known as The Joker who plunged Gotham into chaos and horribly disfigured him in a bombing that also killed his fiancée Rachel Dawes. Afterwards, Dent was driven insane with grief and became a murderous vigilante who sought revenge on everyone he held responsible for Rachel's death, including his former allies Batman and Commissioner Jim Gordon.

He was portrayed by Aaron Eckhart, who also played James Rethrick in Paycheck.

Two-Face started out as Harvey Dent, Gotham City's newly-elected District Attorney, revered by the public as their "White Knight".

The Joker knew Batman's connection to Dent and Rachel Dawes, his fiancée; he kidnapped them both and strapped them to two time bombs. Joker told Batman their locations, but gave him only enough time to save one. Batman chose Rachel, but when he got there, he found Dent instead.

When the Joker's bombs went off, Rachel was killed, and the left side of Dent's face caught fire (due to being saturated in gasoline in his attempt to escape), leaving him hideously disfigured. In the hospital, a grief-stricken Dent refused all medical help, and embraced the police's disparaging nickname for him - "Harvey Two-Face".

The Joker visited Dent disguised as a nurse and convinced him to take revenge on the people he held responsible for Rachel's death: the mob, Gordon and Batman. Now convinced that life was nothing but chance, he made decisions based on a flip of his lucky silver dollar, one side of which had been burned in the explosion.

Two-Face learned that one of the cops in Gordon's unit, Wuertz, was corrupt and had given him over to the mob. He found Wuertz in a bar and flipped the coin for the detective's life; when it landed scarred side up, Two-Face shot and killed him.

Two-Face then confronted mobster Sal Maroni, who told him that another corrupt officer, Anna Ramirez, had kidnapped Rachel. Two-Face then flipped the coin which landed good heads for Maroni, but bad heads for his driver, whom Two-Face then shot and killed. The car flipped over, presumably killing Maroni.

Finally, Two-Face confronted Ramirez, who begged forgiveness and said she had only done the mob's dirty work to pay her mother's hospital bills. Unmoved, Two-Face flipped the coin, which came up good heads; Two-Face spared her life, knocking her unconscious instead of shooting her. Two-Face then kidnapped Gordon's wife, daughter and son, and called Gordon to have him meet him at the building where Rachel died.

Two-Face planned to take revenge on Gordon by killing the person he loved most: his son. As Gordon pleaded for the boy's life, Batman showed up and told him to "judge the people responsible". Two-Face decided to flip for Batman, himself, and Gordon. Two-Face shot Batman through the stomach when the coin landed on bad heads. He then flipped for himself, he spares himself when the coin came up on good heads. After he decided to continue judging Gordon's son, Two-Face flipped the coin. Before he could decide the fate of Gordon's son, Batman, who was wearing body Armor, tackled Dent off the ledge of the roof, to his death.

Batman decided to take the blame for Dent's crimes in order to preserve Dent's image as a hero and give the people of Gotham something to believe in. Dent's death was used to create a new law dubbed the "Dent Act", which gave law enforcement enhanced powers to prosecute criminals. The Dent Act all but eradicated crime in Gotham City, leading to eight years of prosperity and peace. When Bane found out about the truth about Dent, however, he used it in the League of Shadows' crusade against Gotham. The fact that Gordon covered up resulted in many citizens and criminals alike inciting a riot. This event also resulted in several consequences for Gordon. His wife divorced him; likely because she was disgusted that he would honour the person who tried to kill their son. Furthermore, John Blake, one of Gordon's greatest supporters, lost faith after hearing the truth. After Batman apparently sacrifices his life to save Gotham City - while really faking his death and presumably living under a new identity - Batman went on to be remembered as the savior of Gotham City, while the Dent act was eliminated and Dent's legacy was irrevocably tarnished. 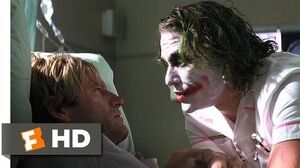 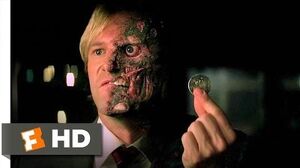 Retrieved from "https://villains.fandom.com/wiki/Two-Face_(Nolanverse)?oldid=4183288"
Community content is available under CC-BY-SA unless otherwise noted.