Continue to kill as much as it can.

Two-Toed Tom is a legendary alligator said to inhabit swamps of the Southeastern United States. Reportedly, the creature wreaked havoc during the 1900s, leaving trails of corpses in its wake. An alligator of gargantuan size, Two-Toed Tom is described as being akin to a demon, deriving its name from the fact that it had lost toes from previous attempts on its life.

Stories began to circulate in the 1920s in regards to Two-Toed Tom, with this story was eventually recorded by the University of Alabama professor, Carl Carmer, whilst he was visiting the area to write his travelogue. Locals described the beast as measuring four and a half meters in length, and that it had been hunting the town for decades. While alligators are commonplace to the community, this alligator had been actively hunting and consuming livestock in stark contrast to the normal behavior conveyed by other alligators. Some have even indicated that Two-Toed Tom was no mere alligator, explaining that it possessed red glowing eyes, and was immensely powerful, being able to even tear a horse to shreds in one swift thrash of its teeth. As rumors spread, the alligator was seen as a demon that was sent from Hell. Having sinister intentions for those that encounter it, not only does Two-Toed Tom massacre livestock and civilians, but it was also believed to rape women that were alone in the swamps. A trail of two-toed footprints were the defining signs that the creature was on the loose.

So the story goes, locals decided to take matters into their own hands, and they set out to destroy the beast. A hefty bounty was placed on the alligator, but it was proven nigh impossible to kill as it would just shake off whatever was thrown at it. Apparently, Two-Faced Tom was also rather intelligent, being able to avoid its would be captors with every turn. The beast would go on to wreak havoc for twenty years. Arguably the worst account was of Pap Haines, a farmer who had bought 40 acres of land. Despite being told that the legends surrounding the famed alligator were myths, Pap discovered that one of his mules was torn apart, and that trails of two-footed paw prints and blood led to a pond. Realizing that Two-Toed Tom must've been close, he decides to put an end to the monster once and for all. With the help of his sons, Pap fills 15 syrup buckets with sticks of dynamite, and began tossing them into the pond. The pond is completely destroyed by the buckets of dynamite, leaving it seemingly impossible for anything to survive. However, screaming was heard from a nearby pond, and the group comes face to face with the grisly remains of Haines' twelve-year-old granddaughter, who had gone out to see what all of the commotion was about. Concluding that Two-Toed Tom most likely knew about their intentions, Haines would continue his vendetta with the vicious alligator, and ultimately dies bitter and unfulfilled.

Other sources claim that Two-Toed Tom took up residence in the Sand Hammock Lake, between Esto and Noma, Florida after having departed from Alabama. The creature was said to continue to devour livestock in a chapter dedicated to legend in the book Holmesteading by E.W. Carswell- as well as bellowing in response to the whistle at the Alabama-Florida Lumber company mill in Noma. Once again, attempts at the creature's life are met with failure by a group of local boys shooting at it with .22 caliber rifles and shotguns.

In 1972, an article in the Pensacola News Journal reported that the creature's footprints had been found on Boynton Island, near the community of Red Head, Florida. 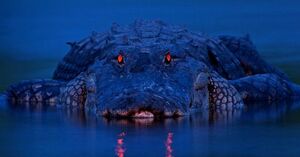 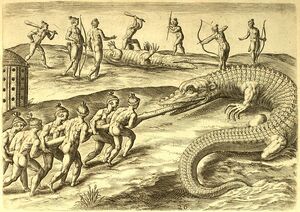 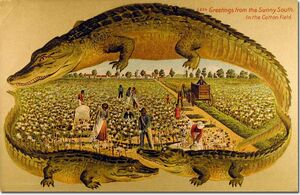