Improve the genetic makeup of the Grineer

Heal the Grineer of their clone degeneration.

Stop Alad V from stealing his research and Nef Anyo and the Tenno from destroying it (failed).
Unlock the tomb of the Sentients (succeeded).
Use the secrets hidden in the tomb (failed).

Tyl Regor is a major antagonist in the MMO third person shooter Warframe.

He is the lead geneticist and head of the Grineer underwater laboratories on Uranus, trying to discover a way to halt the Grineer's clone degradation, which would significantly increase their lifespan and ensure their dominance of the Origin System.

Although he was just trying to unearth an ancient tomb deep beneath his laboratories, his excavations inadvertently started the return of the Sentients.

He serves as the primary antagonist of the Natah quest and the Tubemen of Regor event.

He is voiced by Lucas Schuneman, who also voices Nef Anyo.

As a high-ranking Grineer, Tyl Regor has undergone major bodily modifications. He wears bright blue, muscular armor (though it is unknown whether this is just armor padding or his actual body), a masked helmet and two small protrusions on his neck allow him to wear his shield similar to a collar. His arms and legs have been amputated and replaced with mechanical prosthetics. While the legs are fixed, he has two different sets of arms that he can switch between as he pleases, one that allow him to wield a large axe and the shield on his neck and another pair with large metallic fists that he can shoot like rockets.

While the Grineer are known for their simplistic minds, Tyl Regor stands out as one of the smartest individuals in the Origin System. Compared to his fellow high-ranking Grineer, Tyl Regor's speech is very eloquent and he has a snarky sense of humor, always quick to crack a joke at the expense of his enemies while he threatens them in the same breath.

However, he also shows clear compassion for his fellow Grineer. Not only is he fully devoted to finding a cure for the clone rot and genetic weaknesses that plagues all Grineer, but he shows great pride in the still in-development Tubemen and enraged when the Tenno raided his laboratories, which resulted in the deaths of many Tubemen, something he never forgot and seeks vengeance for. This compassion also extends to Grineer outside of his test-tubes, as shown when he issues orders to his Sergeant Scur in a message. When he remembers that Scur isn't among the brightest soldiers, he sincerely apologizes to him and writes the new orders in as big and few letters as possible, in case Scur only ever reads those.

As the Grineer's lead geneticist, Tyl Regors laboratories focus primarily on clone technology and improving biological materials such as DNA and skin tissue. Having fallen victim to the Infestation through exposure from his own experiments on and misuse of it, Alad V of the Corpus was convinced that these labs hold the key to develop a cure for his condition. Mustering up enough willpower to resist the Infestation's influence on his mind, Alad V asked the Lotus and her Tenno for help in stealing Tyl Regor's research data, which would in turn provide them the opportunity to destroy Regor's laboratories and put a dent in his progress in curing Grineer clone degradation. Not wanting Alad V to recover and potentially threaten his seat on the Corpus Board of Directors again, Nef Anyo came forth and proposed to provide the coordinates and even pay the Tenno to destroy the research outright instead.

Lotus left the decision to the Tenno, who could then individually choose to either help Alad V or Nef Anyo. Of course, Tyl Regor was none too happy about this development and sent his forces against the invading Tenno, and threatened and insulted both Corpus for spearheading this operation. Alad V was ultimately the one victorious, as the majority of Tenno decided to aid him and his assessment of Regor's research was proven correct, allowing him to make a full recovery. Regor never forgot the damage the Tenno inflicted on him and his Tubemen.

Fascinated and determined to discover how the Sentients managed to destroy the Grineer's former masters, the Orokin Empire, Regor excavates the massive Sentient bones scattered across and buried underneath the ocean floor of Uranus, remnants of the Sentients that were defeated in the Old War, which at the same time provides ample opportunity to expand his laboratories. They eventually succeed in making a grand discovery: a Sentient tomb, sealed off by the Orokin themselves after they believed to have won the Old War.

Unfortunately for Tyl Regor and the rest of the Origin System, these excavations caused Sentient scout drones called Oculysts to reactivate, traveling across the different worlds and scanning anything they find. The Lotus noticed the unusual drones on Earth and sent the Tenno to investigate. Initially believing the Oculysts to be new Corpus proxies, Lotus quickly realized their true origin, which caused her to panic and go into hiding for unknown reasons. A former Dax soldier of the Orokin who fought in the Old War and ally of the Tenno called Teshin approached the now abandoned warriors and offered his guidance. He did not trust the Lotus and suspects that Tyl Regor may have roused the enemy long thought dead.

Teshin had the Tenno infiltrate a Grineer galleon and intercept a message from Regor to his Sergeant Scur, telling him to reinforce the tomb's digging site, believing that its secrets could help cure their clone degradation, likely just in case should more dangerous drones activate. Teshin noted Regor's unusual intelligence and that they should hurry if they hope to get to the tomb before he does. While the Tenno rushed to capture the sergeant, the Lotus resurfaced and reprimanded Teshin for leading the Tenno into even greater danger. When Teshin confronted her on her sudden disappearance, she merely responds that she had to "cover her own tracks".

With the tomb's location revealed, the Tenno rushed to intercept Regor, but were too late. While his forces halted the Tennos' progress Regor successfully opened the tomb and entered it. Initially confused by its apparent emptiness Regor, Lotus, Teshin and the present Tenno soon heard a voice from within the tomb calling out to someone called "Natah". Hunhow, the ancient nightmare of the Orokin and leader of the Sentient forces in the Origin System, had been reawakened. Both Lotus and Regor issued a full retreat to their respective troops. Teshin once again confronted Lotus on her lack of transparency, demanding her to tell them who this Natah is. She told them that Natah is her old name, but time for explanations is short. While Hunhow's full awakening cannot be stopped anymore, they can at least buy some more time by collapsing the underground tunnels and reburying the tomb.

Despite the clear danger that Hunhow poses, Tyl Regor refused to allow the Tenno to reseal the tomb and sent his forces to intercept the explosives. As they fought Regor's troops Hunhow once more called out to Lotus, demanding to know why his own daughter had betrayed him at the last possible moment and refused to destroy the Tenno as she was supposed to. Tyl Regor was intruiged by the connection the mysterious leader of the Grineer's greatest enemies seemed to have with a Sentient, but was shut off before he could ask any more questions. The Tenno fought off his troops and collapsed the caves on Hunhow's tomb, resealing him for at least a while.

Enraged by their victory and their prior assault on his laboratories, Regor directly challenged the Tenno to come fight him. 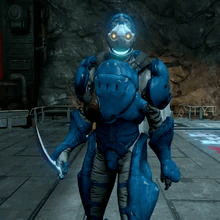 Tyl Regor prior to his rework.

Promotional image for the Tubemen of Regor event, showing the entrance of one of Regor's cloning laboratories. 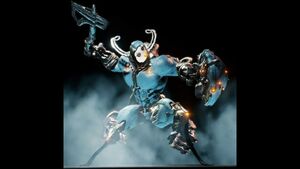 Tyl Regor as he appears in the Codex. 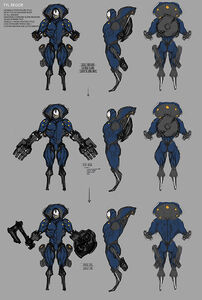 Concept art for Tyl Regor's rework.
Add a photo to this gallery

Retrieved from "https://villains.fandom.com/wiki/Tyl_Regor?oldid=3884316"
Community content is available under CC-BY-SA unless otherwise noted.