Kill Kerrie, Julie and their friends.

Tyler is the main antagonist of the 2000 animated science fiction film Heavy Metal 2000.

He was voiced by Michael Ironside, who also played Darryl Revok in the 1981 film Scanners, Overdog in the 1983 film Spacehunter: Adventures in the Forbidden Zone, Richter in the 1990 film Total Recall, General Katana in the 1991 film Highlander II: The Quickening, Dial in the 1993 film Free Willy, Colonel Dugan in the 1994 film The Next Karate Kid. Nolan Pierce in Walker, Texas Ranger, and Emperor Zanramon in the 2012 Teenage Mutant Ninja Turtles series, Lewis Snart in the CW TV series The Flash. He also voiced Darkseid in the 2003 animated series Justice League / Justice League Unlimited.

Tyler initially finds a green crystal and becomes obsessed with an insatiable hunger for power and immortality. He heads to a planet that has a fountain of immortality, but stops at a planet designated F.A.K.K. (Federation-Assigned Ketogenic Killzone), because its inhabitants carry a small amount of immortality water in their bodies. Tyler abducts a few people but kills all the rest, missing one: Julie. She vows to avenge her family and kill Tyler before he reaches the fountain planet. Julie is unaware, though, that her sister Kerrie is still alive and is one of Tyler's hostages. Germaine, a member of Tyler's hijacked crew was left behind after he attempted to protect Kerrie, so he reluctantly agrees to help Julie.

Their search takes them to a renegade space station, full of sleaze and depravity. When Tyler tries to rape a waitress in a strip club, Julie intervenes and almost kills him. However, Tyler uses a serum to immediately regenerate even the most fatal injuries. He then blows up the club with grenades from Julie's bandolier.

After escaping the explosion, Julie tracks Tyler to a desert planet. There she meets a mysterious sage named Odin, and his charge, Zeek (a talking rock who calls Julie "soft one"). Elsewhere, Tyler discovers a race of reptilian beings; he challenges a champion and then their leader to a death-match in which he is almost killed. Tyler wins, though, by throwing the leader into a lava pit, and declares himself their new lord. Julie enters the city disguised of a woman the reptiles found for Tyler. That night, while seducing Tyler, Julie tries to kill him by stabbing him in the neck with a horned reptilian skull and shoving his head into a lava fountain. Her attack fails when Zeek, ordered by Odin to extract Julie, overpowers her and takes Julie back to Odin.

Julie later infiltrates Tyler's ship where she finds out Kerrie is alive and discovers Tyler has been distilling the immortality serum from her peoples' bodies. She attacks Tyler's doctor, revealing him to be a robot. The attack also sets the complex on fire with a strange blue flame. Julie manages to free Kerrie and they escape just before the complex explodes. Tyler sees the explosion from the distance and is devastated that his source of regenerative serum has been destroyed. He angrily kills one of his soldiers, then declares he will make Julie immortal so he can "screw her and kill her every hour of every day for eternity". Deciding that time is short since his ship was destroyed and he was down to three vials of serum, he orders his troops to storm the citadel where the immortality waters are located.

Meanwhile, back at the sacred city where the fountain is located, Julie undergoes the ritual Taarna did in the first film and is outfitted in skimpy armor. Along with her sister and Germaine, they help fend off Tyler's army, although they are unable to keep them at bay after the city elder is assassinated. After Tyler drops the last potion he kills Lambert. Just as he gets through the fountain's last lock, Tyler is confronted by Julie and they fight. Tyler appears to have the upper hand, until Odin intervenes and is injured, giving Julie time to viciously tear into Tyler, who shrivels up since he ran out of the serum. Odin then reveals himself to be the last of the creatures responsible for creating the fountain. He mocks Julie and Tyler for helping him get this far. When it seems all hope is lost, Zeek pulls the crystal key from its pedestal, locking Odin inside the fountain and sending himself into the depths of space.

The film closes with Julie being helped out by Germaine and Kerrie, while Zeek confirms through a monologue that the stone is safe with him and will not fall into any evil forces that come looking for it. 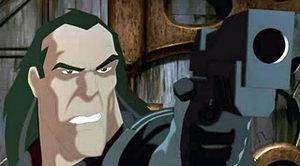 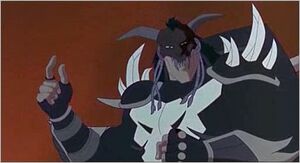