Member of the Gremlin Family member

Terroristic Pawn
Tyler Gremlin is a minor antagonist in Pixar's 12th full-length animated feature film Cars 2. He is a Lemon who is a member of the Gremlin Family, working with Professor Zündapp.

Eventually, Finn McMissile came over to Lightning McQueen’s pit to stop Acer and Petey Pacer from entering and attacking Mater. Once Finn sprayed them with foam from a fire extinguisher and began to flee, countless members of the Lemons started to chase him.

While Tyler was driving silently down the road looking for Mater, Finn used his hook to knock over a vending machine in front of Tyler, who took the blame for it.

Like all the other Lemons, Tyler Gremlin is a cold-hearted terrorist who would do anything for a quick buck. Apparently, he is very homicidal because he was involved in the death of Rod Torque Redline.

He is also very sadistic for attempting to abduct Mater until Hans and two other vehicles yelled at him. 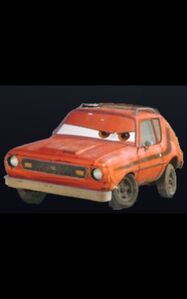